Given the shocking cancellation of major San Diego performances slated for this week—including San Diego Opera’s Aging Magician and the La Jolla Symphony and Chorus Benjamin Britten War Requiem—it was a minor miracle that Art of Élan presented its chamber concert Tuesday, March 10, at the San Diego Museum of Art. And given the overload of dismaying news about the worldwide spread of the too often lethal coronavirus, an hour and one-half of stimulating chamber music provided welcome relief. 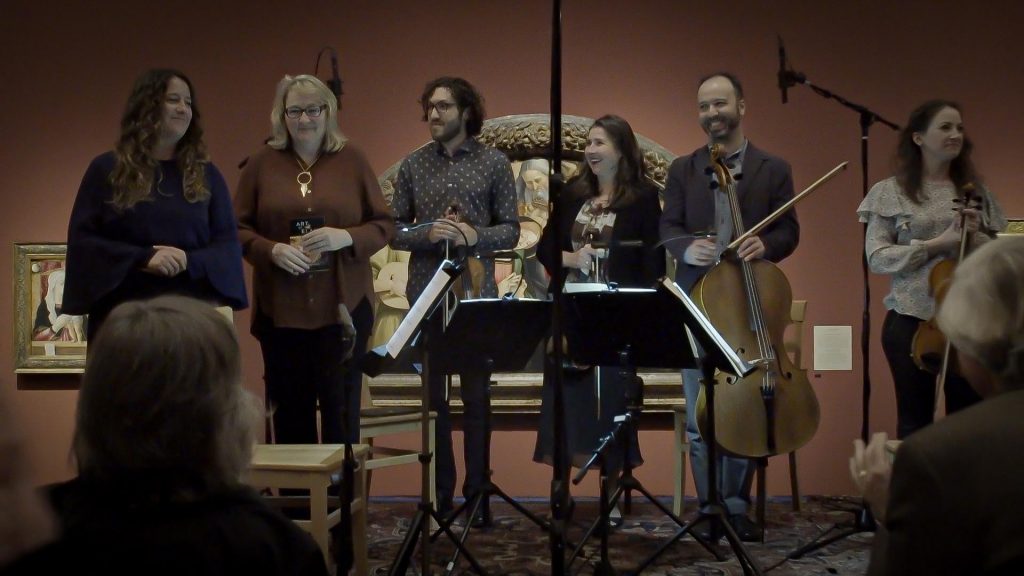 I was completely taken with Mason Bates’ 2008 Life of Birds, a convivial, effervescent quartet for two strings and two winds spread over six concise movements. Bates’ quirky, unpredictable counterpoint gives equal importance and interest to each instrument, which makes for exciting textures at any tempo. For example, in the third movement—titled “The Caged Bird Sings”—it appears that the violin’s opening slow, wavering high-pitched melody is the main theme, but maybe the bird song is the agitated chirping of the flute and clarinet that surrounds the violin. Or is it the cello’s suave rendition of the opening violin theme that creeps in below these voices? With his cornucopia of fresh ideas and their clever juxtapositions, Bates keeps his audience not only guessing, but eagerly engaged.
Art of Élan’s musicians for Life of Birds included flutist Rose Lombardo, clarinetist Terri Tunicliff, violinist Kate Hatmaker, and cellist Alex Greenbaum: a polished, vivacious, and well-balanced ensemble.

Under the baton of Music Director Rafael Payare, the San Diego Symphony opened its current season with Bates’ expansive tone poem, his 2011 Alternative Energy, and two seasons back, guest conductor Edo de Waart brought Bates’ intriguing 2014 Garages of the Valley to Copley Symphony Hall. I am waiting with bated breath for the next Bates installment here in San Diego!

Art of Élan’s Artistic Director Kate Hatmaker opened this concert with the Prelude from J.S. Bach’s Partita in E Major, BWV 1006, for unaccompanied violin, in part because her program also featured Eugéne Ysaÿe’s Violin Sonata in A Minor, Op, 27, No. 2, which begins with clever allusions to the Bach Prelude. Hanah Stuart played the Bach Prelude with such athletic poise, ideally complemented by her warm, polished timbre, that I could not decide if I was grateful for hearing her gorgeous account of the Prelude or disappointed not to hear the entire Partita!

On the one hand, the structure of Ysaÿe’s four movement Violin Sonata from 1924 clearly reflects musical Europe’s embrace of Neo-classicism after World War I. The slow second movement, for example, is a lithe two-part invention, and the composer titles his third movement “Sarabande,” a favorite dance movement found in 18th-century suites and partitas. But this bravura showpiece—Ysaÿe was one of the great violin virtuosos of his era—roils with late Romantic rhapsodic passion, and, like his contemporary Sergey Rachmaninoff, he is infatuated with the Gregorian chant “Dies Irae.” In each movement of his sonata, the composer either boldly quotes the famous opening phrase from this chant that belongs to the Roman Catholic Requiem service, or he carefully dissects the notes and hides them in rapid figuration. Wesley Precourt gave a powerful yet sensitive account of this robust solo sonata. If he could have borrowed just a tablespoon of Hanah Stuart’s delicious violin sonority, he would have approached perfection.

Not much of American composer Willson Osborne’s music has been published, so this understated, mid-20th century teacher of music theory at Philadelphia’s New School of Music is rarely mentioned, even in scholarly music history tomes. His Rhapsody for solo clarinet from the 1950s appears to be his one claim to fame, and Terri Tunicliff gave an elegant, ingratiating account of this mysterious but not ominous etude.

Darius Milhaud’s First String Quartet, Op. 5, written in 1912, closed the program with a rush of mellifluous themes woven into deft textures that brought Claude Debussy’s String Quartet to mind. This is the free-spirited Milhaud before he started toying with the snarky clangor of bitonality. Members of the quartet: Precourt and Hatmaker on violin; Stuart on viola, and cellist Alex Greenbaum. They could easily take that show on the road.

This concert was presented by Art of Élan on March 10, 2020, at the San Diego Museum of Art in Balboa Park.