While San Diegans were partying in the streets of the Gaslamp—taking a stab at a New Orleans grade Mardi Gras festival, Art of Élan and its beadless denizens staged their own fete in another corner of downtown. Surrounded by Jennifer Steenkamp’s massive video installation “Madame Curie” at the Museum of Contemporary Art San Diego, Art of Élan Co-Artistic Director Kate Hatmaker and her musical colleagues played a chamber music concert as mesmerizing as Steenkamp’s flowers. 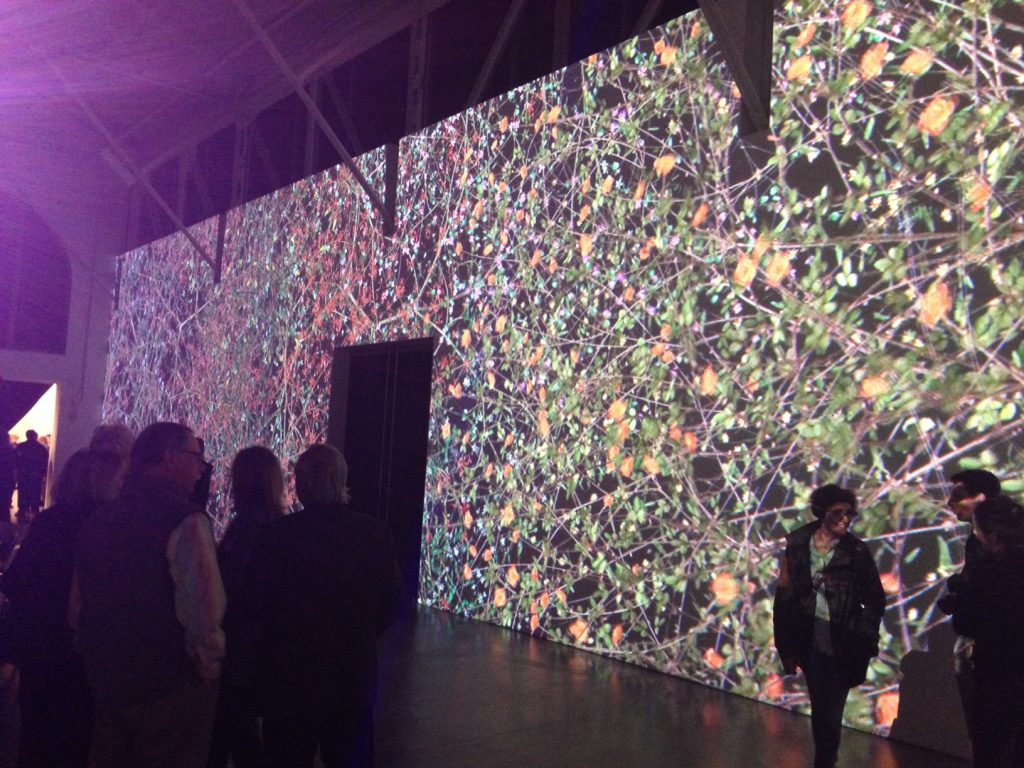 Three of the walls in the museum’s largest hall were completely covered with the artist’s flowing, densely constructed floral designs, giving the darkened room an eerie yet pleasurable glow. Toru Takemitsu’s “Toward the Sea,” the work that related most closely to the video, featured the mysterious, smoldering melodies of alto flute, played with an engaging variety of dark and throaty timbres by Rose Lombard and assisted by rapid flourishes and gentle tremolandos on marimba executed with measured understatement by Andrew Watkins. 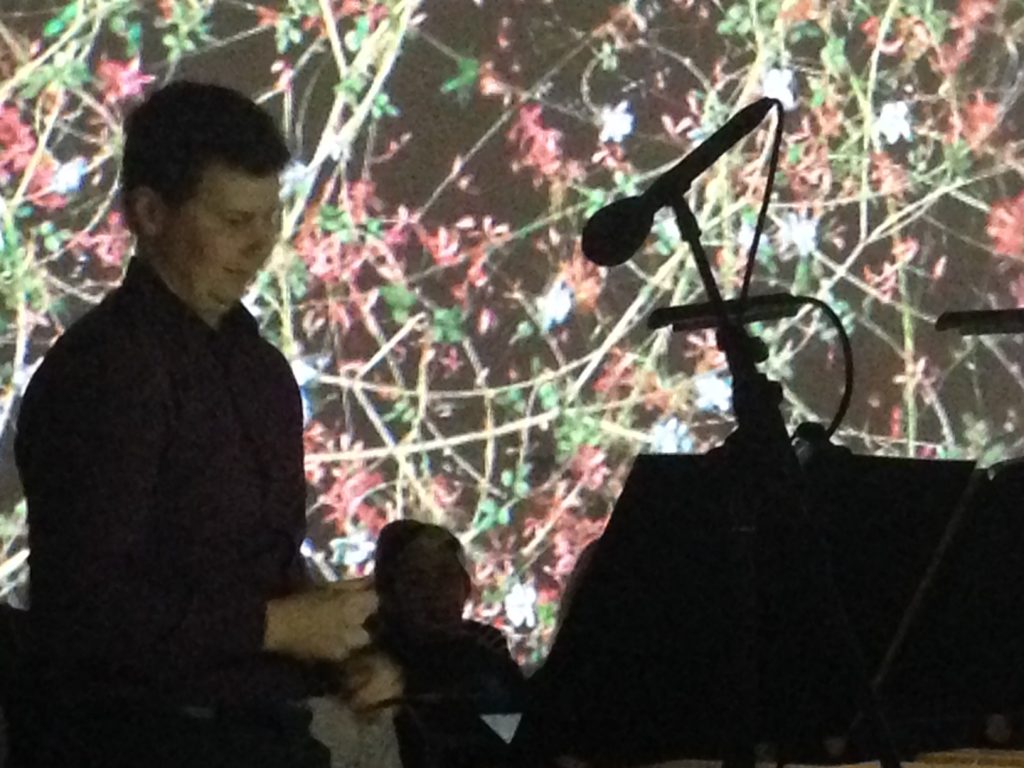 Takemitsu’s hazy Impressionism—he took Debussy’s Asian-influenced textures and replanted them in his native Japanese musical soil—ascended gently from the two musicians performing in the center of the room, while Steenkamp’s floral collages undulated deftly around the room’s walls.

The heart of this program, George Enescu’s sprawling four-movement Octet for Strings, related less directly to the video, although the composer’s long, sinuous themes that seldom cadenced did parallel Steenkamp’s unebbing flow of floral images. I should confess that over decades of dedicated chamber music attendance, I have never heard Enescu’s Octet, but I was quite taken with its complex counterpoint, imposing energy, and rich lode of themes, several of which migrated from movement to movement. The next time San Diego program planners find themselves tempted to drag out the tired Felix Mendelssohn Octet, I hope they will choose the Enescu instead.

The Octet players were seated in a circle in the center of the room, with the audience surrounding the musicians in a second, wider circle, an arrangement that worked well because the sound radiated so beautifully from the center throughout the room, and the listeners were physically unusually close to the players. The cadre of strings, all members of the San Diego Symphony, played with zeal and superb balance, unleashing the young composer’s exuberant emotional vocabulary. The Octet is one of Enescu’s earliest works, written in 1900, a year after he graduated from the Paris Conservatoire. Nearly every player had some delectable solo moments, but I was particularly impressed by the many rich, lyrical solos played violinists Yumi Cho and Zou Yu, as well as suave transitions executed by violist Chi-Yuan Chen. Cellist Andrew Hayhurst executed his foundational role with vigor and clarity, spinning out athletic ostinatos throughout the piece, as well as offering elegant cantabile lines in the slow third movement. The other Octet players were violinists Kate Hatmaker and Igor Pandurski, violist Ethan Pemela, and cellist Chia-Ling Chien.

San Diego Symphony Principal Bass Jeremy Kurtz-Harris opened the program with Peter Askim’s “Edge,” a colorful, episodic single-movement etude that built rewarding momentum as the soloist catalogued the many tricks his instrument can display—harmonics and even double-stop harmonics!—but are rarely encountered as the typical army of symphonic contrabasses dutifully undergirds the more colorful and clever antics of their symphonic colleagues. Of course, one bass solo etude per concert is quite sufficient.

[themify_box style=”shadow” ]This concert presented by Art of Élan on February 28, 2017, was performed at the Museum of Contemporary Art San Diego, 1100 Kettner Blvd. in downtown San Diego. The next Art of Élan concert will be given March 14, 2017, at the San Diego Museum of Art in Balboa Park.[/themify_box]