According to my records, San Diego new music aficionados have Matt McBane and his Carlsbad Music Festival to thank for putting the music of American composer Caroline Shaw on the local radar. In September of 2013, McBane’s Carlsbad festival featured Shaw and her ensemble Roomful of Teeth performing her “Partita for 8 Voices,” a work that had recently won the Pulitzer Prize in Music. 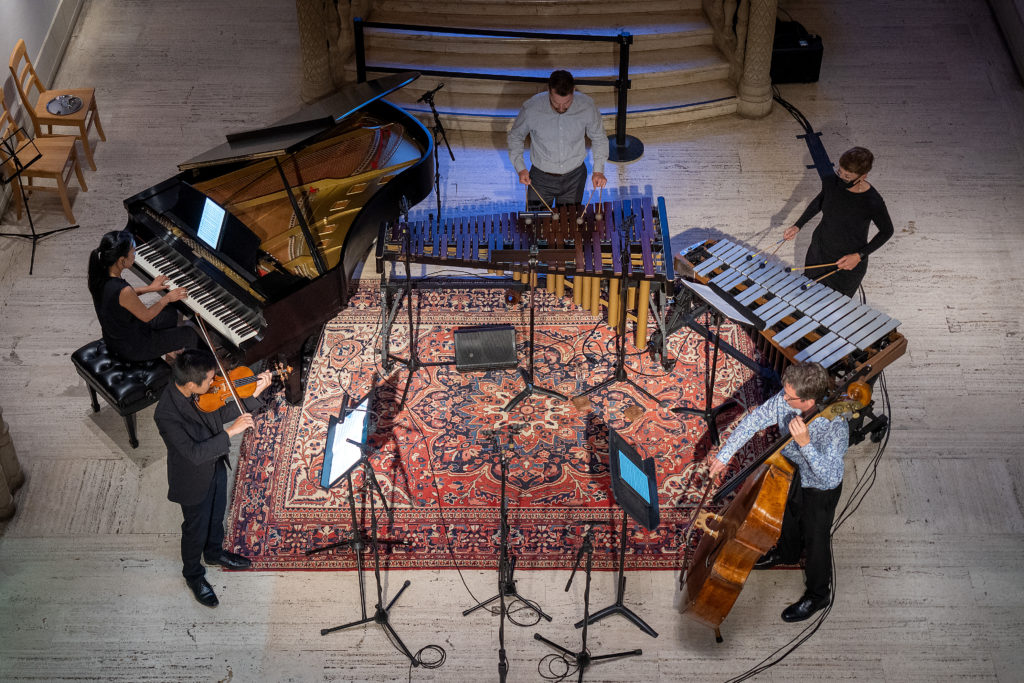 The following year Kate Hatmaker’s enterprising Art of Elan series began to feature Shaw’s compositions, as did the Hausmann Quartet’s programming. And this coming August, the La Jolla Music Society’s SummerFest 2022 will feature Caroline Shaw as its composer-in-residence.

To help put us in the mood for Shaw, on Tuesday’s Art of Elan program at the San Diego Museum of Art the Hausmann Quartet gave a moving account of Shaw’s 2015 “Plan and Elevation.” Like Béla Bartók’s Fourth and Fifth String Quartets, Shaw has chosen a five-movement structure for her string quartet, although her picturesque movement titles, e.g. “The Orangery” and “The Beech Tree” would not have appealed to Bartók’s austere aesthetic. In this quartet, Shaw’s varied sonority moves easily from the typical warmth of bowed ensemble strings to sections of arresting ensemble pizzicato and even plucked strings–as in guitar-like strumming. I was impressed in the opening movement, for example, with a bowed duet of lyrical yet angular lines between first violin Allen Isaac and violist Angela Choong accompanied by the vigorous plucked chords of second violin Kenneth Liao and cellist Alex Greenbaum. Shaw’s use of string techniques that are typically employed just for ornament or accent creates radically contrasting textures that breathe welcome vitality into the hallowed string quartet ethos. Like her predecessors in the genre, Shaw is highly skilled at thematic development and variation, and the level of her invention in “Plan and Elevation” never failed to engage this listener.

John Luther Adams (not to be confused with the Nixon in China John Adams) won his much deserved Pulitzer Prize in Music the year after Caroline Shaw was awarded hers. Although my patience has been taxed by a few of Adams’ minimalist orchestral canvases, I am happy to report I found his “The Farthest Place” that opened this concert most captivating, a glistening curtain of slowly, subtly changing arpeggiated clusters. Undulating figures by the piano, marimba, and vibraphone provided the plush sonic cushion over which violinist Kenneth Liao and contrabassist Jeremy Kurtz-Harris offered supple, sensuous themes. This ensemble may be seen in the photo accompanying this review.

Violist Ethan Pernela and cellist Joanna Morrison gave their exciting, beautifully phrased account of Paul Wiancko’s 2014 duo titled “American Haiku.” Fulfilling the haiku portion of the title, the composer’s compact but always arresting musical ideas appear in rapid juxtaposition, without modulations or transitions. Wiancko is clearly not afraid to indulge in unabashedly tonal ideas, but his saving grace is  clustering them without tonality’s customary formulas. In the performance, I appreciated Pernela’s dark, well-modulated timbre and Morrison’s muscular cello technique. This is a duo I would enjoy hearing again.

Hausmann also offered Puerto Rican-born Angélica Negrón’s single movement “Marejada” written for the Kronos Quartet in 2020. Since marejada refers to the swell or surge of the ocean, it is not surprising that Negrón has her strings play over a recorded pedal tone that sounds like the quiet lapping of waves on the shore. Like Shaw, Negrón uses more than a bit of strumming, but her bowed themes favor lithe roulades that sounded both nautical and nice.

I would be remiss if I did not salute violinist Kenneth Liao, who filled in for Bram Goldstein, the Hausmann Quartet’s regular second violin who was unavailable for this concert. Liao’s beautifully shaped lines and ensemble finesse fit elegantly into the Hausmann ethos.

This concert was presented by Art of Elan on Tuesday, May 17, 2022, in the atrium of the San Diego Museum of Art in San Diego’s Balboa Park.