Every new commission is a gamble. Unlike buying a new car, you cannot take a commissioned piece for a test drive. You simply pay the composer up front and then pray the delivered opus will be worth the investment. 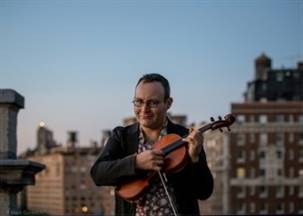 From Tuesday’s (January 31) premiere of Ljova’s Clarinet Quintet at the Art of Élan concert at the San Diego Museum of Art, I would say Art of Élan’s Executive and Artistic Director Kate Hatmaker got her money’s worth. The New York City based composer crafted a beautifully paced, single-movement work filled with inventive, engaging themes for the clarinet, supported by a string quartet that deftly fleshes out moods ranging from haunting mystery to ecstatic dance.

Clarinetist Joshua Rubin used his potent, mesmerizing sonority to great effect in Ljova’s extended, sinuous incantation that opens the quintet, adding a slight edge to his attack in the more explosive and energized sections, especially the dervish dance finale with its intoxicating asymmetrical rhythmic patterns. If Ljova’s musical language moves freely between traditional tonality and Middle Eastern modality, he is not afraid to ramp up his clashing themes to the edge of cacophony. This winning piece is a welcome addition to the very modest canon of quality chamber music that features clarinet, and I hope to hear it again soon.

From the title of Missy Mazzoli’s 2011 solo violin piece “Dissolve, O My Heart,” the listener would not be amiss to expect an experience of searing emotional communication. Whether it was the composer’s spare texture and fragmented structure or violinist Jeff Thayer’s cautiously precise performance—or perhaps a combination of both—I found the work’s emotional quotient rather tepid. Although as an abstract etude, I could admire its construction and Mazzoli’s complex development of simpler motifs.

On this side of the Atlantic, the likelihood of encountering the music of the British composer Arnold Bax is not great, although in post-World War I England, he was quite the mode. His 1922 Quintet for Oboe and Strings, written at the height of his creative output, offers the best of two worlds: alluring, post-Romantic harmonies with a hint of French Impressionism and the tidy organization of neoclassicism. Sarah Skuster’s velvet tone color and limpid phrasing provided exactly what Bax expected the oboe to do as he painted a series of bucolic landscapes and climaxed with a rousing village round dance. Several gorgeous duos between Skuster and violist Jason Karlyn amply demonstrated Bax’s gift as a supreme melodist, as well as the finesse of these performers.

Art of Élan finished this well-attended concert with a suite of Ljova’s more commercial endeavors. His “Bagel on the Malecon” proved to be a sweet valentine to the traditional Cuban son and his “Budget Bulgar” an interpretation of klezmer wedding music. The latter required the return of virtuoso clarinetist Joshua Rubin to the stage–sheer delight, even if “Budget Bulgar” seemed derivative, unlike Ljova’s excellent Clarinet Quintet that opened the concert.

[themify_box style=”shadow” ]This Art of Élan concert was given in one of the upstairs galleries of the San Diego Museum of Art in Balboa Park. The organization’s next performance is scheduled for February 28, 2017, in the downtown location of the Museum of Contemporary Art San Diego.[/themify_box]