Art of Élan completed its adventurous season at the San Diego Museum of Art Tuesday (May 15) with a spectacularly eclectic program of music by younger contemporary composers. Of these five composers, American Sarah Kirkland Snider and Argentine Andrés Martin were in the audience, an indication of the organization’s healthy engagement with the sources of this repertory. 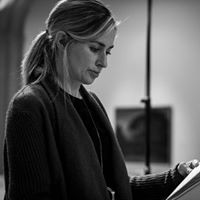 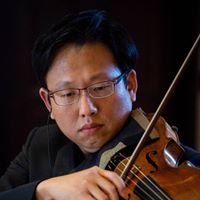 pre-recorded audio to open the concert, presented in the museum’s acoustically resplendent atrium. At the outset, violist Chi-Yuan Chen sculpted crisp, short phrases that soon expanded and unraveled over the subdued, steady hum of the audio track, which acted as a kind of continuo. Chen’s rich but multifaceted sonority persuasively presented Mazzoli’s fecund thematic ideas with the bold intensity and finesse they deserved.

Written in 2013 for the men’s vocal ensemble Cantus, Snider’s “Psalm of the Soil” wafts gentle waves of dark, block choral chords that form a mystical homage to the hardy settlers who tilled the land of the American midwest. Nine men from San Diego’s Sacra/Profana under the direction of Juan Carlos Acosta blended their evenly matched voices, bringing out the reverence and wonder of Nathaniel Bellows’ terse poetry, although their comforting blend compromised their articulation of the text.

At once exceedingly playful and serious, Yevgeniy Sharlat’s three movement “Spare the Child!” creates a splendid if naïve tapestry of a child’s day. The virtuosity of New York City’s visiting NOW ensemble invigorated this real time video game that began and ended with a pair of charming music boxes programmed with the composer’s own delicate asymmetrical themes.

Michael Mizrahi coaxed a wide variety of textures from the prepared piano, deftly switching to high-pitched recorder when required, and flutist Erin Lesser managed to maintain her lustrous melodic lines even when accompanied by raucous duck whistles. Proving that he could write compelling tonal themes in addition to his nervous, pointillistic counterpoint, Sharlat gave winning duos to Lesser and clarinetist Alicia Lee, which they performed with Brahmsian grace. Although his role in the piece remained artfully understated, contrabass Logan Coale floated lyrical themes that integrated the busy chatter above him, and Mark Danciger’s electric guitar provided delicate ornamentation. Buried in Sharlat’s dense middle movement we heard a deconstructed version of the traditional lullaby “Rock A Bye Baby.” Russian born and educated in both his native country and the U.S.A., Sharlat serves as a member of the music faculty of the University of Texas, Austin. I will not be surprised to hear more from this inventive composer.

Commissioned by Art of Élan for the NOW Ensemble, Martin’s single movement “Bruja” received an enthusiastic premiere. The NOW players appeared to revel in Martin’s joyful heterophony as they dashed through its rhapsodic moods that never left the boundaries of tonality. The piece opened with a pulsing prelude and toccata for the full ensemble, followed by ample solo opportunities for each performer, as well as yet another extended duo for Lesser and Lee. To round out his form in a traditional manner, Martin brought back his busy toccata section from the opening.

Ted Hearne’s “The Answer to the Question that Wings Ask” creatively engages a single speaker and a string quartet. Saul Williams’ text is a nonstop compendium of answerable and unanswerable questions, which Gill Sotu delivered with shining clarity as well as the breathless zeal of an ambitious poet at a poetry slam. Understandably, the music is meant to propel the text rather than overpower or compete with it, so Hearne’s quietly rhythmic progressions either alternate with the poetry or undergird it as a rhythmic mirror. The warm, clean sounds of violinists Keir GoGwilt and Igor Pandurski, cellist Yao Zhao and violist Chen gave sympathetic support to Sotu’s soliloquy of questions.

This concert was presented by Art of Élan on May 15, 2018, at the San Diego Museum of Art in San Diego’s Balboa Park. The organization’s next event is a program titled “Undone” staged at the Museum of Contemporary Art San Diego on May 29, 2018, at 7:00 p.m.