Earlier this week I was reading a fascinating article in the current Opera News about American composer Kevin Puts’ new opera about Virginia Woolf, The Hours, which will premier at the Met in two weeks. In addition to portraying Woolf’s struggles writing her novel Mrs. Dalloway, the Met production of The Hours will boast two of the leading divas of our time, soprano Renée Fleming and mezzo-soprano Joyce DiDonato. 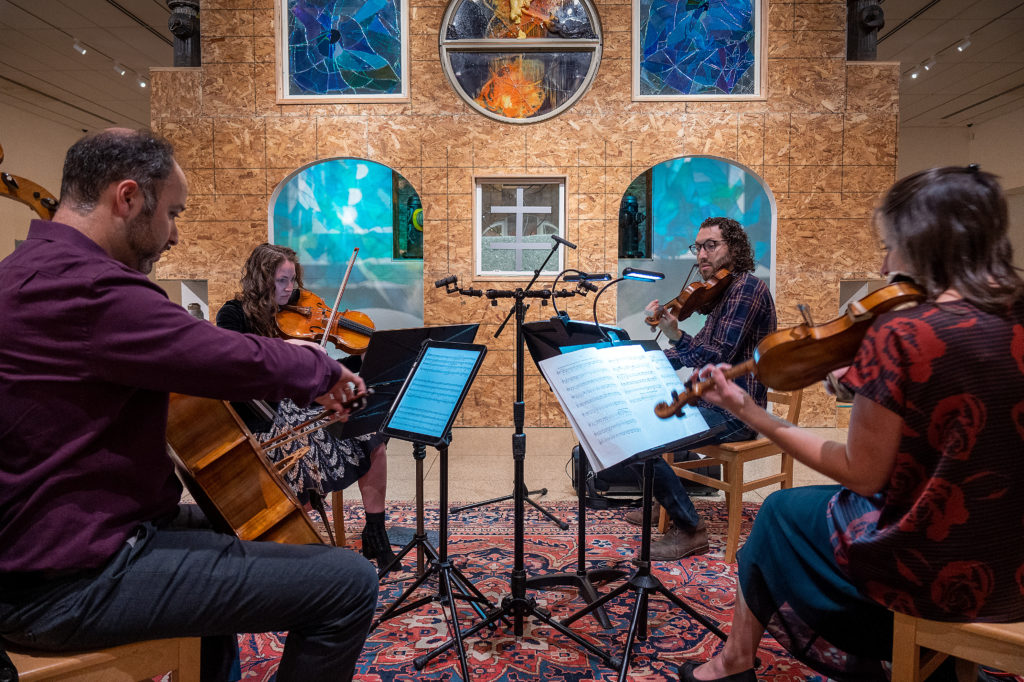 On Wednesday at its San Diego Museum of Art concert, Art of Elan played Kevin Puts’ 2007 string quartet Credo, an adventurous, rhapsodic five movement work that dares to be tuneful in a way that is not merely retro. I first heard Art of Elan perform Credo in 2013, and each time since then Puts’ work has impressed me.

The program of Jonathan Bailey Holland’s 2015 “This House Is Not of This Land” depicts an impression of a lively, perhaps charismatic, African-American church service. Although I did not detect quotations of specific song or hymns from that tradition, this short (7-minute) quintet for strings and winds did capture the lively spontaneity of such a service with its murmured cries and moans as well as spirited call and response dialogues. Notable in the performance were the forceful, angular themes offered in tandem by cellist Greenbaum and bass clarinetist Max Opferkuch, as well as whispered conversations between violinist Precourt and flutist Rose Lombardo in their highest range.

Although Holland is a new composer to me, I hope to hear more of his work. Not surprisingly, Holland’s bio states that an influential teacher was Bernard Rands, a star of the UC San Diego music department faculty before Harvard lured him to the east coast.

Harpist Julie Smith Phillips gave Juhi Bansal’s 2020 harp solo “Trail of Stars” a captivating performance. Bansal, an Indian composer raised in Hong Kong, used bright descending flourishes to represent the movement of stars in the night sky as recorded with time photography. Bansal’s idiom is unapologetically tonal, and—like most harp solos—the musical effect is nothing less than sumptuous. Some day I hope to encounter a harp solo that is boldly atonal, completely unconcerned with sounding pretty.

Art of Elan’s nod to “early music” on Wednesday’s program was “Upon Enchanted Ground,” a quartet by Alan Hovhaness from 1951. Prolific and musically conservative, like Samuel Barber he never fell under the influence of serial composition that held sway in American composition after World War II. This quartet breathes Hovhaness’ predictable fondness for sinuous, modal themes, interpreted with grace by flutist Rose Lombardo. Percussionist Andrew Watkins, cellist Greenbaum and harpist Phillips completed this unusual ensemble that gave an appreciative account of this charming opus.

Art of Elan presented this concert on Wednesday, November 9, 2022, at the San Diego Museum of Art in San Diego’s Balboa Park.