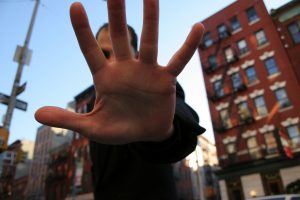 So, I’m driving down the street and my phone rings.  I activate the Bluetooth hands-free device in my car.

“Is this Bill Eadie?” says the voice on the other end.

“I’m calling about tomorrow, Bill Eadie. We’re counting on you to be there. 5:30pm sharp, not a moment earlier or later.”

I wrote down the meeting place, and the voice said, “Commit this information to memory and then destroy it. We don’t want any record for someone to find.”

And thus began Accomplice: San Diego, the latest entry in La Jolla Playhouse’s Without Walls series. A hit in New York, Hollywood, and London, Accomplice turns the audience into the cast, and if your cast mates are engaged and engaging, you’ll have a great time.

Mine certainly were both of the above.  Besides my friend, Diane, the others in the group were named  (in alphabetical order) Bonnie, Cindy, Danielle, Kevin, Maia, Mark, Mike, Susan, Tom, and Tony. The point of the show is to figure out where to go next from a series of clues, and so teamwork is essential. Our group quickly picked up the team feeling, and in this case twelve heads were most certainly better than one or two. 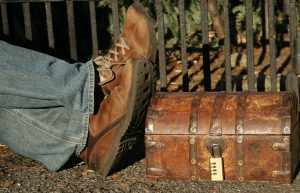 The Playhouse staff made me promise not to give anything away, but I think I can give you the basic set up without violating that promise. The first person we met asked us to help him and his friends escape San Diego. They would be flying Miami later in the day and would then travel on to a private island where they’d be out of reach of the law.  But, first each traveler had to receive his ticket, so we were looking for the other travelers.  We were to receive a reward once our efforts were complete.

Our travels took us to the streets and buildings of Little Italy.  The clues were not always obvious, and we had a few puzzles (as well as several pleasures) along the way. We enjoyed a round a beers at one location and some wine and snacks at another. There was quite a bit of walking, and some stair-climbing, and Diane wore herself out before we finished, and had to leave the group to sit down. For a while, we thought that there might not be any cast members except the one who greeted us initially, but eventually, we encountered Kevin Koppman-Gue, Mike Nieto, J. Tyler Jones, Oliver Rayón, Jared Grey, Hannah Logan, and John Rosen, as well as Tom Salamon, the director and co-writer (with Betsy Salamon-Sufott).

We did have a few unplanned adventures. In one building, our elevator stuck between floors, lurched a couple of times, and finally the doors opened, though not at our destination. All of us got out of the elevator and took another route.  At another point, we were about to attempt to break into a car (don’t ask) when a cast member approached and quickly put us back on track.

We also missed getting a clue from Mr. Rayón. We spotted him, figured he had to be part of the cast, and a couple of people from our group accosted him.  But, he claimed not to know anything, and we moved on.  Turns out we were supposed to find him after visiting another location, and he wasn’t supposed to talk to us until we came out of that location. Since he had turned us down once, though, we didn’t approach him again.

We still ended up in the right place, and you really can’t get too far off.  If you look carefully, you’ll notice that there are “minders” stationed along the way. If we had gone too far astray, I’m sure that the minders would have stepped in to get us back on track. After all, we had a group half an hour ahead of us and another group half an hour behind us, and the show would be spoiled if the groups starting running into each other. I became so confident that we were being monitored that I asked one person point-blank if he was one of our minders. Turned out he was a performer and that fact soon became clear. [php snippet=1]

The women in our group got very good at being guides.  They figured out symbols, deciphered coded messages, and kept us on the right path (except when we missed Mr. Rayón – and that wasn’t their fault). The men became good at being protective of the various physical clues we accumulated (though, I tried to give a cast member a cassette tape recorder I was carrying around, and he made certain I kept it – turned out we needed it later). The men also became suspicious of people we met along the way and weren’t about to take their word for who they said they were and why they were talking to us.

After the show concluded, we got to chat with Mr. Salamon and the rest of the cast, and they handed us each a program with credits and cast bios. I’ve scanned that program, and a link to the scan appears below. If you’re going to see the show, though, don’t open the link until afterward, as the program has enough information in it to spoil some of the fun.

And, of course, that’s what Accomplice: San Diego sets out to be and achieves.  It’s not intended to be great theatre, but it’s a fun game where a group of adults (21 and over) spend some time together and bond over a common task. After the show, I was on the street looking for Diane, and a group of young people passed me going the other way.

“Come and join us,” one women called to me. I smiled at the invitation but shook my head. I had just left one terrific group and didn’t need to join another.

[box] Accomplice: San Diego has been extended until April 21. Performances begin every half hour between 4:30 and 7pm Tuesdays through Fridays and between 1pm and 5pm Saturdays and Sundays. Tickets range from $35 – $49 and are available by calling the Playhouse Patron Services Department (see below). Wear walking shoes and dress for outdoor weather.