There’s a saying in theatre that “the show must go on.” The New Village Arts/Oceanside Theatre Company co-production of Stephen Sondheim’s Into the Woods found itself in a dilemma on opening night: Veteran actor Danny Campbell was out, and he was playing the leading role of the Narrator/Mysterious Man. So, in went Layth Haddad, the production’s “swing,” or an actor who can cover any role in the show on short notice. As Mr. Haddad was playing the role of the Steward, his understudy, Jac Mannion, went on in that role. 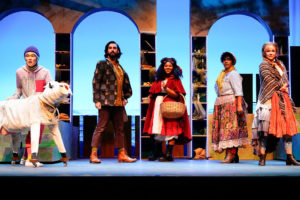 There’s another famous theatre line, from the musical, 42nd Street: “…you’re going out there a youngster. But you’ve got to come back a star!” Wish I could say that’s what happened, but it’s not.

Truth be told, some hardworking performers were defeated by technical problems, mostly with Evan Eason’s sound design. It’s probably not entirely Mr. Eason’s fault, either, as the cast wasn’t able to compensate when the recorded tracks to which they sang overwhelmed their ability to sing clearly (the singing was coached to the tracks by Music Director Leigh Anne Sutherlin).

Words are of consummate import in anything by Stephen Sondheim, and if one can’t hear the words all is lost. My guest at the press opening found seating near the stage for the second act and reported that while he could hear the words better there, his ears were ringing after the performance ended. I seated myself near the back for the second act, and the only way I could follow the show was my familiarity with it from viewing other productions.

Mr. Campbell is still out of the show, and its website has posted a picture of another veteran actor, Manny Fernandes. I wish both of these gentlemen well, and I hope that the company will find its footing to present audience-pleasing performances for the remainder of the run, through May 1 at Oceanside’s Sunshine Brooks Theatre. 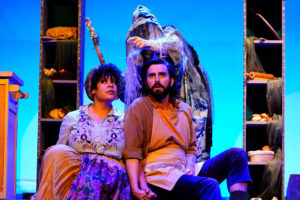 For readers not familiar with Into the Woods, it had its world premiere at San Diego’s Old Globe Theatre in 1986. It would eventually go to Broadway, where it would run for almost two years and win Tony Awards for its book (by James Lapine, who also directed) and score (by Mr. Sondheim).

Act 1 presents characters from a set of fairy tales, including Little Red Riding Hood (Jasmine January), the Wolf (Tanner Vydos) and her grandmother (Lauren Ashley), Cinderella (Megan Carmitchel), her stepmother (Brittany Carrillo), her two stepsisters (Taylor Magee and Olivia Pence), and the Prince (Mr. Vydos), Jack, of beanstalk fame (Kevin Phan) and his mother (Lauren Ashley), and Rapunzel (Ms. Carrillo), her prince (Mr. Phan), and her mother, who is also The Witch (Rae Henderson-Gray). Mr. Lapine also created a fairy tale to help the others hang together, the story of a baker (Luke Monday) and his wife (Sydney Joyner). This couple yearns for a child and visits the Witch for help. The Witch tells them that she will help if they bring her a series of objects that they could find by going into the woods.

The baker and his wife encounter the fairy tale characters during their time in the woods, manage with some difficulty to fulfill the witch’s demands, and by the end of Act 1, seem to be ready to live happily ever after.

Act 2 manages to undo the progress made in Act 1, tragically, in most cases. Mr. Sondheim does provide some reassurance in the song, “No One Is Alone,” which was added partway through the initial Old Globe run.

Given the complexity of the production and its large number of characters, there’s lots to admire. Kristianne Kurner’s direction paces the three-hour run time well and manages more than a few moments with real flair. Alyssa “Ajay” Junious’s choreography is simple but effective. Christopher Scott Murillo’s scenic design is utilitarian but makes the smallish stage at the Sunshine Brooks Theatre fit the action by building levels and places to perch. Ditto Beckett Zittlau-Johnson’s lighting design. Several of Keira McGee’s costumes are truly elegant.

The effectiveness of the show hangs on its lead, who was supposed to be Mr. Campbell. The show went on without him, but he was missed terribly. I wish Mr. Fernandes well as his apparent replacement.

I feel badly that opening night was such a disaster for this production. I considered not writing a review at all, but eventually I decided that a review could describe the problems as well as what where I found them. There is a long run ahead, and I hope that things settle down so that audiences will be pleased with what they experience from this production.

Performs through May 1, Fridays: 8:00 p.m., Saturdays: 2:00 p.m. and 7:30 p.m., Sundays: 2:00 p.m. and select Sundays at 7:00 p.m. There are also a few Wednesday matinees, but they appear to be aimed a school groups. Check with the box office if you are interested in attending a Wednesday matinee. The Sunshine Brooks Theatre is located at 217 N. Coast Highway, Oceanside. Pay parking is available in several downtown Oceanside lots; some street parking may be available. There is a meal-plus-show package available. See the Oceanside Theatre Company website for details.