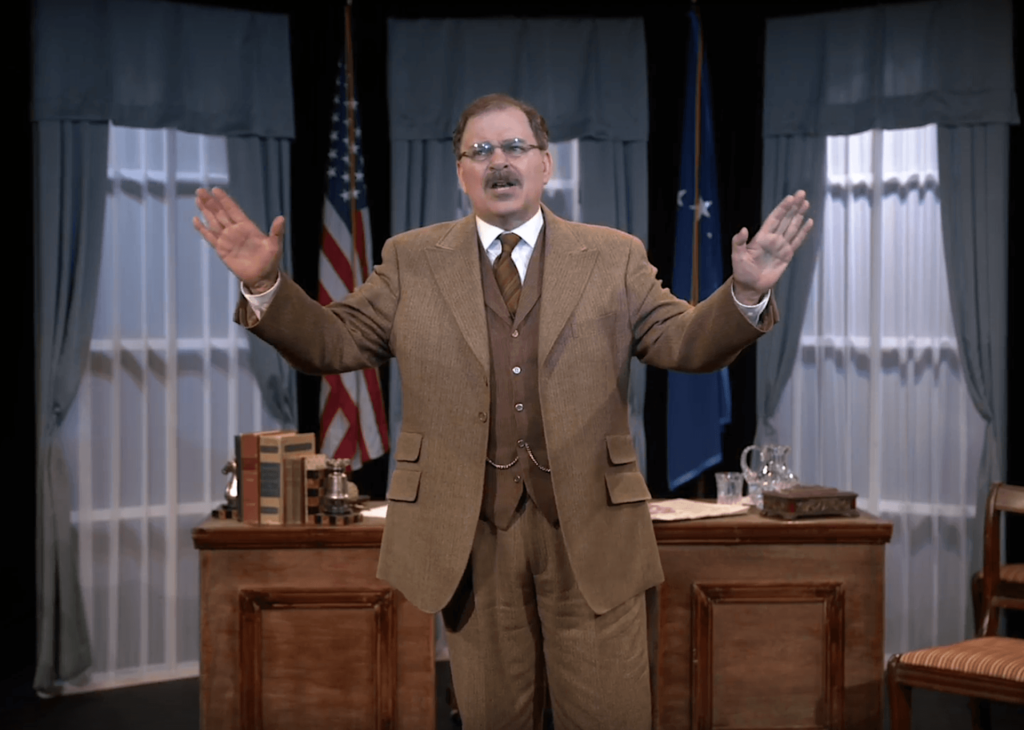 The timing could not be better for the world premiere of Roosevelt: Charge the Bear, presented by The Roustabouts Theatre Co. Available to watch until the night before Election Day, November 2, the wonderful drama delves into the life of the 26th President of the United States, Theodore Roosevelt.

As the filmed staging begins, Roosevelt (Artistic Director, Phil Johnson) is becoming sympathetic to The Coal Strike of 1902, which was started by the United Mine Workers of America. Miners demanded higher wages, shorter hours and to be acknowledged as a union. Empathetic to the workers’ demands, Roosevelt hopes to find a way to help them.

While Roosevelt’s investment in the strike grows, he shares anecdotes about his personal and professional life, including ones involving his family, presidency and childhood.

What keeps the script from Marni Freedman and Johnson focused is their decision to make the plot be about the historical strike. Since there is a clear central conflict, the playwrights keep the narrative from turning into an overstuffed biographical play.

Their script features vignettes, which allows theatregoers to understand Roosevelt more as a man. He is written as a good and often funny person who is brave, cares deeply about aiding others and is determined to accomplish many essential tasks.

Just as strong as Johnson’s writing, is his acting. Johnson gives a towering performance, that helps keep audiences invested in every scene. Wearing costumes from Jordyn Smiley, and assistant costume designer, Ross Stewart, he can seamlessly dramatize Roosevelt’s excitement and eagerness one moment, and depict the president being lost in thought and contemplative the next.

In addition, Johnson plays a variety of real men and women, from Roosevelt’s supportive second wife, Edith, to the confrontational senator, Mark Hanna. He is very entertaining portraying the different roles in the one-man show. 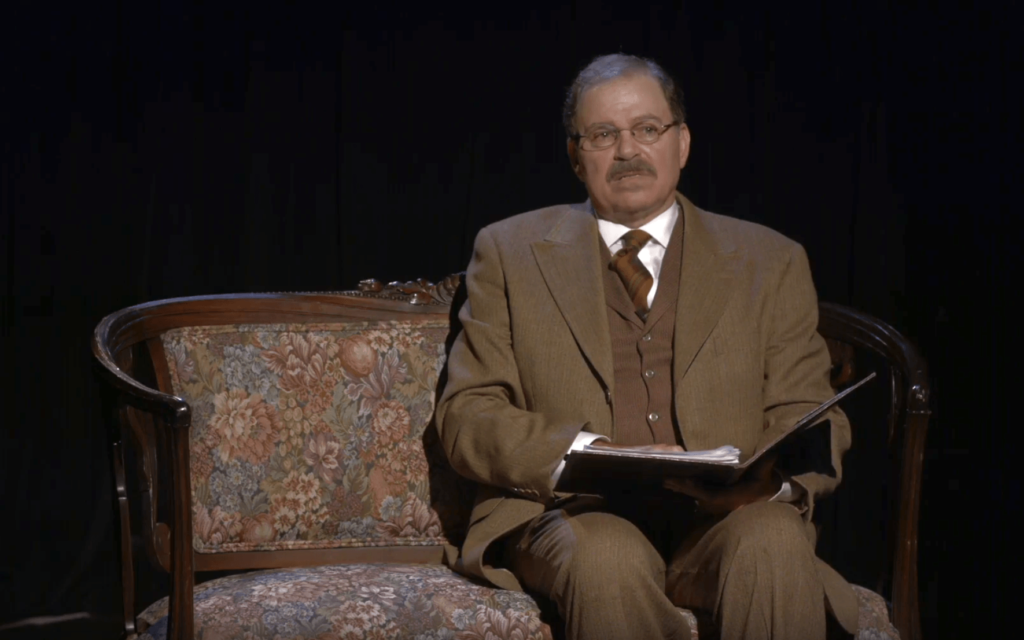 Partially responsible for Johnson’s standout performance is the director, Rosina Reynolds. Filmed inside a private studio, the small space feel much bigger than it appears on camera, because of her storytelling. This is also because of the efforts of the crew members.

Tony Cucuzzella’s set primarily represents the Oval Office, which is respectful and comes across as historically accurate.

Two people who are important to the pacing, are lighting designer, Joel Britt, and the director of photography/editor, Michael Brueggemeyer. Both the change of lights, and editing from Bruggemeyer, add to memorable scene transitions during the entire runtime. Reyonlds, Britt and Brueggemeyer beautifully present a climatic montage that revolves around a conversation between Roosevelt and general John Schofield, with dramatic uses of quick edits and sudden blackouts.

Due in no small part to Johnson’s star turn and Reynolds direction, Roosevelt is an uplifting and educational tribute to a powerful leader. There is plenty to enjoy in the tale, from history lovers to people who just want to see a compelling and timeless story.

Roosevelt: Charge the Bear is available for viewing through November 2.