Thursday evening’s concert by the Israel Philharmonic with conductor Zubin Mehta suffered from a split personality disorder. The performances of “A Journey to the End of the Millennium” by the Georgian born, contemporary Israeli composer Josef Bardanashvili and Maurice Ravel’s “La Valse” in the first half of the concert contrasted sharply with the second half, in which the audience witnessed a stunning rendition of Beethoven’s Symphony No. 3. 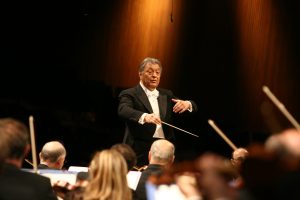 Bardanashvili’s work was excerpted from his fourth opera of the same name, based upon the novel by A.B. Yehoshua. The resulting symphonic poem left me confused. Not being privy to either the opera or the novel, I could not escape the sense of being presented with a musical narrative in search of a story line, as if I were listening to a private conversation on the other side of a closed door. Melodies that may have been pregnant with meaning and associations seemed disjointed and random when divorced from the narrative of the opera.

Bardanashvili is clearly an accomplished composer, and his orchestrations sound fresh and innovative. Probably because the piece was new to the conductor, Mehta chose to use a score, although he conducted the rest of the program from memory. Perhaps this symphonic poem would prove more satisfying through repeated listening and further study.

After the Bardanashvili experience, I figured that the Ravel would virtually sparkle and dance off the page, but what ensued was downright odd. The band’s ragged ensemble playing deprived “La Valse” of its Gallic charm and grace. Musicians and conductor seemed to be at odds, struggling to hold the piece together. Instead of an ersatz Weltschmerze, we experienced a rhythmic morass.

I am curious to know what happened. Perhaps the acoustics of the Civic are not conducive to ensemble playing and blend. Or maybe everyone was exhausted from traveling and playing too many gigs. Considering the virtuosity of this celebrated orchestra and Maestro Mehta’s own conducting prowess and legendary precision, I don’t understand the shoddiness of this performance.

My higher expectations were satisfied, however, with Mehta and company’s performance of Beethoven’s “Eroica” Symphony, which made up second half of the program. From the virile opening chords of the first movement, it was clear that there was a new musical sheriff in town. The Maestro exhibited his legendary control, while encouraging the musicians to dig down deeply, creating a stunning performance of this masterpiece.

Although the rhythmic feel of the group through most of the symphony was excellent, the Scherzo exhibited a “shooting ducks” attitude in which the rhythms seemed to be calculated with the musician’s eyes, divorced from any corporeal feel. This is deadly, because Beethoven consistently sets up rhythmic expectations that he artfully dodges through unexpected accents. For example, in the Scherzo, which is written in triple time, accents are expected on the first beat of every measure, except when the composer accents “off” beats. If these off beats are not physically stressed by the musicians, the sense of having a new rhythmic structure does not get transmitted.

The Israel Philharmonic’s seating is unusal. The cellos, for instance, sit next to the first violin section with the contrabasses behind the cellos, an arrangement I’ve never seen. The second violins are on the conductor’s right, in the Stokowski manner. I am told that this particular seating arrangement is one of Mehta’s idiosyncrasies.

I was surprised to see that many, if not most of the violinists and violists, used a “Franco-Belgian” right hand position. With so many relatively recent Russian and Eastern European émigrés, I would have expected to see the high wrist of the Auer/”Russian” School. The woodwinds reminded me of the best of the British orchestras, with a style that can only be called international: wonderful sound, intonation and ensemble.

Kudos to the La Jolla Music Society for caliber of orchestras selected for this season’s Celebrity Orchestra Series, which will bring to San Diego the Montreal Symphony on March 23, 2016 and the New York Philharmonic on May 4, 2016.

[themify_box style=”shadow” ]This concert, presented by the La Jolla Music Society as part of its Celebrity Orchestra Series, was given on November 12, 2015, at the San Diego Civic Theatre.[/themify_box]