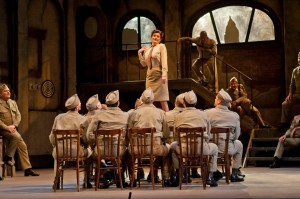 If the scores of certain recent musical theater works express operatic pretensions—think of Evita or Phantom of the Opera—is it at all surprising that operatic productions are beginning to take on the show biz glitz of musical theater? San Diego Opera opened its new season with a rollicking production of Gaetano Donizetti’s Daughter of the Regiment Saturday (Jan. 26) that sported the broad humor of a wholesome 1940s American musical.

This cleverly updated comic opera has no shortage of excellent voices and rousing choruses, but it is eager to win over even the most reluctant operagoer with an abundance of physical comedy to complement its bel canto vocal largesse. Moving the plot from a picture postcard 19th-century Swiss mountain village to rural France during the Allied conquest of the retreating German army at the end of World War II, designer Julio Galán turned the opera’s namesake regiment into a platoon of American GI’s in their trademark khaki uniforms.

What could be more ingratiating to an American audience than a platoon of singing and dancing U.S. Army recruits, although it should be noted that the set and costume designer, the late Julio Galán, was Mexican; the opera’s director Emilio Sagi is Spanish, and the production itself is owned by an Italian house, the Teatro Comunale di Bologna.

Still, we go to opera to hear the music, and this cast did not disappoint. Slovakian Soprano L’ubica Vargicová and American 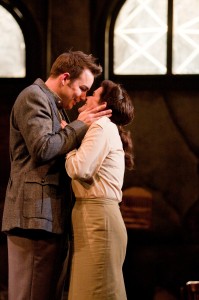 tenor Stephen Costello made ideal star-crossed young lovers, their bright, supple voices intertwining with exuberant radiance. For me, their first-act love duet brought out the best in both of their voices, an emotional depth they only approached again in solo ruminations: Vargicová’s poignant farewell to her regiment (“Il faut partir”) and Costello’s ardent second-act aria, his profession of love for Marie (“Pour me rapprocher”) as she is about to be married off to a titled suitor.

No doubt some readers are wondering if Costello hit those fabled nine high C’s in his spirited first-act aria (“Ah, mes amis”), which I can report he did with assurance. But singing is not an Olympic event, and I found his most persuasive performance in his slower, catabile arias where the rich color of his mid-range bloomed with heart-rending pathos.

Because Vargicová’s forceful top range sometimes revealed a tinge of strdency, she too was more winning when she was not singing full throttle. Her dramatic take on Marie, a canny blend of ingénue and army brat, proved as impressive as her aplomb singing in heels striding on the bar in the opening act tavern.

Kevin Burdette’s robust and beautifully focused bass gave Sergeant Sulpice every ounce of military authority (towards his platoon) or fatherly sympathy (towards Marie) that each situation required. His trio with the soprano and tenor (“Tous les trois réunis”) sparkled with with delectable humor and suave definition. 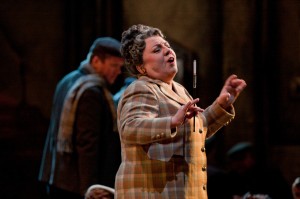 The opening-night audience ate up Polish contralto Ewa Podlés’ slapstick caricature of the Marquise de Birkenfeld, Marie’s mysteriously generous benefactor who “saves” her from lowly military life and lavishes her with the comforts of high society. This role is supposed to poke fun at upper class hauteur, but director Sagi had Podlés take the low road to that end. When she pulled an incriminating letter from her bosom, for example, her athletic manuvering risked another Janet Jackson class wardbrobe malfunction. Sagi gave the Marquise a bevy of hyperanimated servants, and the audience was equalled enthralled with such antics.

Some admire Podlés’ beefy contralto instrument, but it must be an acquired taste to fancy a voice that has a different color and shape for each register.

In this opera, the chorus counts for a major character, whether the women of the town are praying to the Blessed Virgin for deliverance or the men of the regiment are singing their patriotic military anthems. Under Chorus Master Charles F. Prestinari, the San Diego Opera Chorus proved splendid at every turn: disciplined, sonorous, and ever alert to the dramatic moment.

Verteran singer Carol Vaness impersonated the Duchess of Krakenthorp, typically a spoken comic role, but Vaness interpolated [php snippet=1] the opening phrases of “Mon coeur s’ouvre à ta voix” from Saint-Saens’ Samson and Delilah as she paraded about the Marquise’s party. Interpolations are expected in these bel canto romantic comedies, but the humor of her choosing this tune was deflated by one of the cast members turning to the audience and explaining, “Wait, this aria belongs in the next opera!”

Some humor that worked well was giving the Marquise’s party guests grand titles based on local geography. In apt European fashion, each guest was announced with honorifics such as the Count and Countess of Anza-Borrego or the Princess of La Jolla. The “Duke of Hillcrest and his Nephew” drew a loud cackle from the audience.

On a more serious note, Franco-Canadian conductor Yves Abel drew a crisp, lively response from the orchestra, and deft, shapely solos wafted from the pit on cue. I found his pacing unfailingly congruent to the dramatic movement, alert without ever being rushed.

Galán’s spacious, first movement tavern allowed maximum space for the movement of several crowded scenes, and his small touches revealed how much he thought about his adaptation. The news of the German retreat, for instance, came over a large console radio placed on the tavern’s side wall. For the second act, his mirrored, art deco chateau salon was the definition of elegant simplicity, and his period costumes for the Marquise and her compatriots were equal part haute couture and haut camp.

Unless the American economy improves markedly, we can expect a lot more bel canto operas in the San Diego Opera future. Let’s hope they are as cleverly imagined and cast as well as this Donizetti bon-bon.