Like most sleep-born dreams, recalling specifics and retaining a solid story line upon awakening usually proves elusory. For Shakespeare fans steeped in tradition, The Old Globe’s presentation of “A Midsummer Night’s Dream”, under the direction of departing Old Globe Resident Artist Patricia McGregor, might be an allusion too far but for an audience welcoming all that is modern culture and looking to laugh, this production is a joy, delivered in San Diego’s own park of fancy and marvels on the outdoor Lowell Davies Festival Stage. 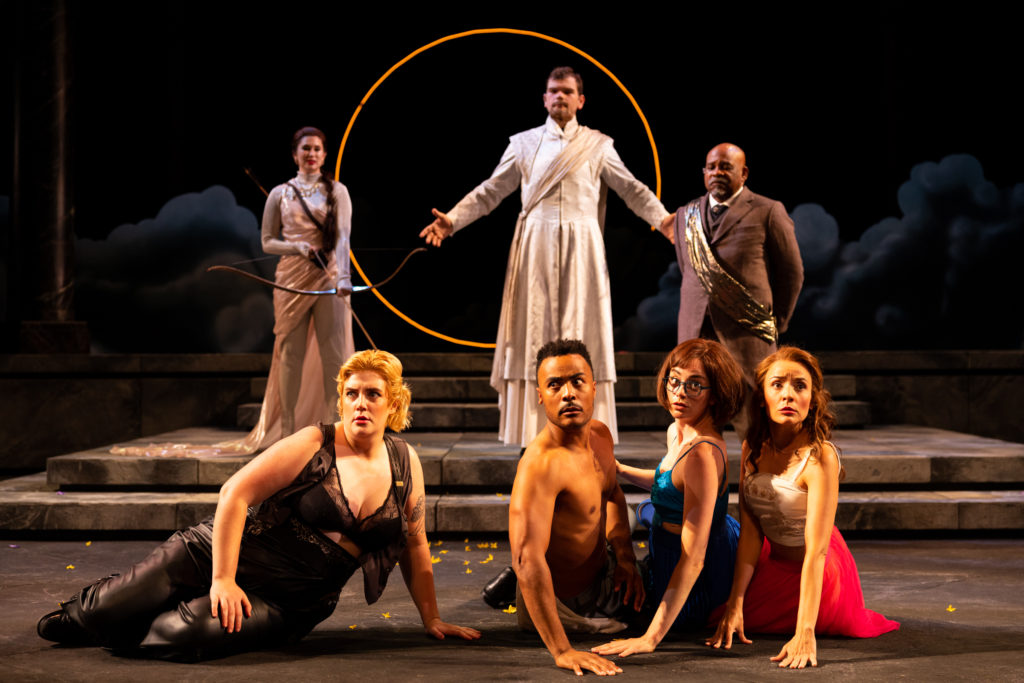 The cast of A Midsummer Night’s Dream. Photo by Rich Soublet II

In one of several flips of the script, the play opens with a wordless fight scene that shows Hippolyta, Queen of the Amazons – played with grandeur by Camilla Leonard, rescuing Theseus, the Duke of Athens played as more figure-head than warrior by Brett Cassidy. (Leonard also played Cobweb, a mechanical or a stage hand wanting to act, in the troupe trying to stage a play within the play called “Pyramus and Thisby.” Cassidy doubled as a mechanical named Mustardseed.)

In the original, the Duke says to Hippolyta: “I woo’d thee with my sword, and won thy love, doing thee injuries.” It is the bane and benefit of live performance that no pause-rewind function allowed me to revisit the scene when the traditional conquering of the Amazon queen seemed reversed.

A similar nod to modern mores comes soon after when a father of Athens (Victor Morris) complains to the Duke of interference with his intention to marry off his daughter Hermia (Jamie Ann Romero) to Demetrius (Jeffrey Rashad) as Hermia’s heart belongs to another by name Lysander, played raucously by Bernadette Safic. In the whole, cheered by the San Diego audience. (Later on, the bard’s reference to “Jack and Jill” is changed by Director MCgregor to “Jill and Jill.”) It’s a twist on a twist to cast a woman as Hermia’s love interest in a play in Shakespeare’s time portrayed by all men with some in the role of women. While her new love interest, Safic’s Lysander, often pantomimes rudely, Romero’s comic range as Hermia nearly stole the show.

Tipping a hat to another San Diego treasure in Comic-Con, Oberon, king of the Faeries (Paul James) appears as a character out of hero comics and graphic novels, bare-chested with immense puffy green and sparkling pantaloons, bestowed with kingly crown and staff.  Titania, Oberon’s queen as played by Karen Aldridge presented with the most authentic royal presence of anyone. Titania, Oberon and the faeries are reaching for what the Director Patricia McGregor notes in the printed program as Afrofuturism, a movement in art and literature to blend futuristic technologies with Black culture. 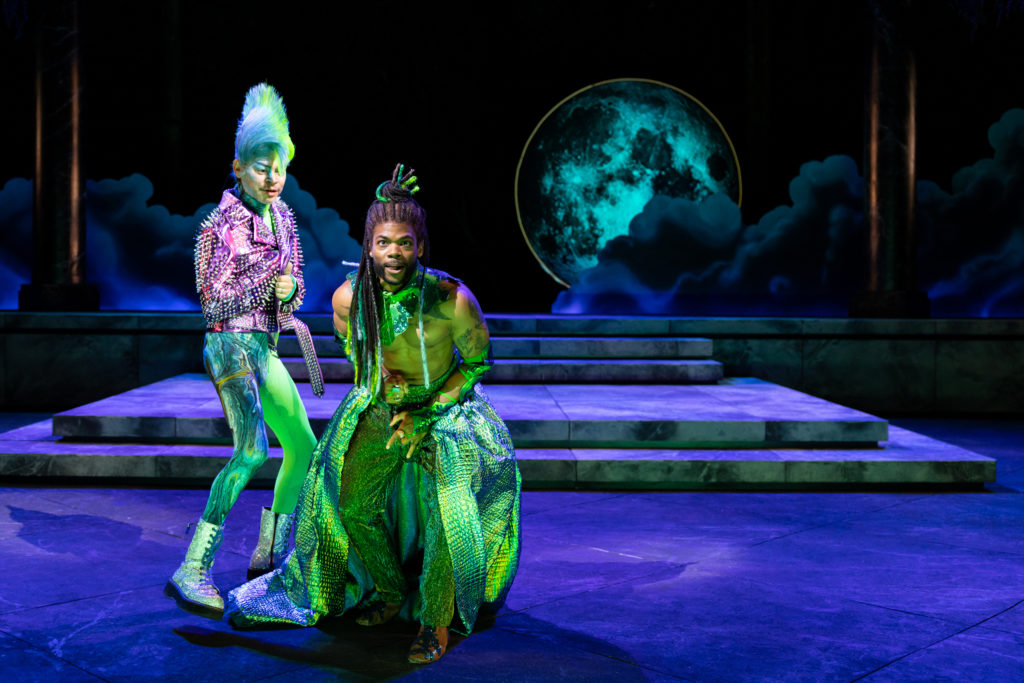 (from left) Christopher Michael Rivera as Puck and Paul James as Oberon in A Midsummer Night’s Dream. Photo by Rich Soublet II

As blow-hard mechanical Bottom, Jake Millgard did a masterful job insisting on playing all the parts in Pyramus and Thisby. Escorted by the cast of faeries (Carter Piggee, Jude Tibeau and Maggie Walters) all costumed as if surrounded by a blue mist, Millgard’s Bottom is transformed by Puck into a mule and preens as befits one doted on by the Faerie Queen Titania, enchanted by Puck at Oberon’s command to fall for the first being she sees on waking. Poor Helena (Celeste Arias) is first enthusiastically desperate for Demetrius’s love and then just as physically energetic and desperate to dump the enchanted attentions of both he and Lysander, both bewitched by Puck mistakenly.

And then there’s Puck, played sprightly for such a tall version of the mischievous faerie by Christopher Michael Rivera, dressed vaguely reminiscent of the Globe’s Grinch in the same green as Oberon (and the Grinch) with an immense mohawk head piece.

A Midsummer Night’s Dream played out in a warm, windless San Diego midsummer evening in the forested Balboa park, on arrival in the theater I was convinced the set designer meant to employ lighting on the open area upstage to take us to the forest of the play using the green wall of trees, but instead cranked in some clouds and an immense moon as backdrop.  Given the persistent presence of the doric columns of the palace scenes, it was a little harder to feel transported to the magical woods of the play. 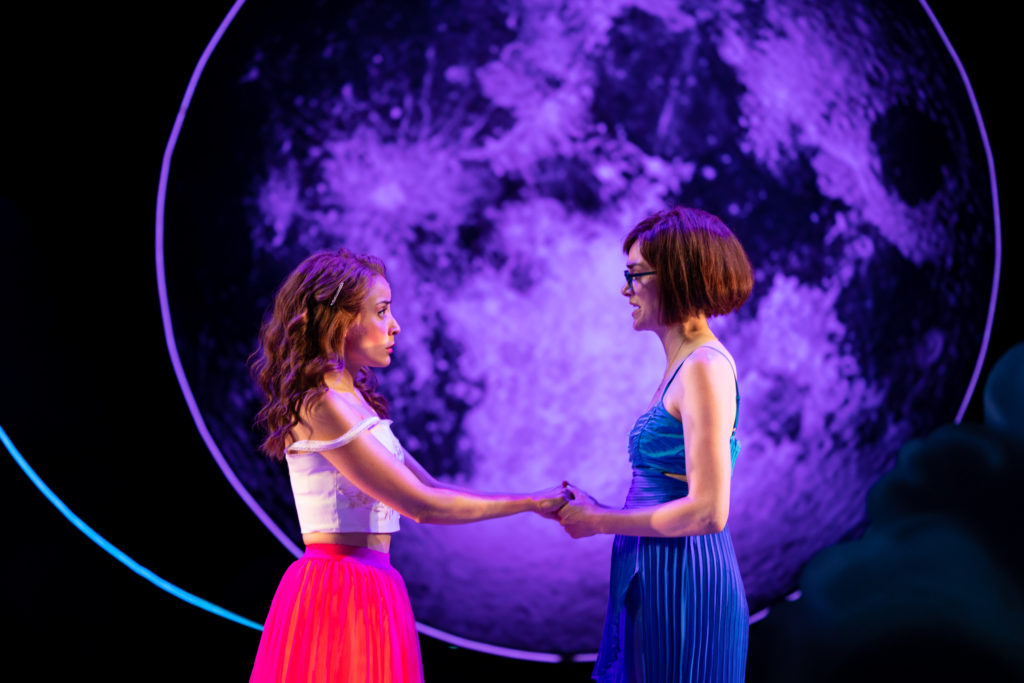 (from left) Jamie Ann Romero as Hermia and Celeste Arias as Helena in A Midsummer Night’s Dream.
Photo by Rich Soublet II

It’s a timeless tale and this well-told performance is festooned with modern popular music, one actor with a mobile phone and one with a copy of “Shakespeare for Dummies” (the Dummies series originated in San Diego.) While the angry father did not himself experience a transformation through the magic of the forest, at the end, during Oberon’s final summary speech blessing the unions of all the lovers, Morris’ Egeus returns to the stage to join the hands of Lysander and Hermia to the cheers of the audience.

A traditional Apology in literary works is a framework for a discussion by the author of their personal views of the world. Befitting Director McGregor’s efforts to modernize the images and culture of the play, Puck has the last word with “If we shadows have offended…” and an entreaty that it’s all been just a dream and for us all to just get along.

Link to the PROGRAM