Those classical music followers who know Peter Maxwell Davies’ sonorous picture postcard “An Orkney Wedding with Sunrise” for orchestra or his haunting chamber opera The Lighthouse will find his 1969 “8 Songs for a Mad King” rather shocking. One of the British composer’s brash, avant-garde theater pieces from his rebellious early days, “8 Songs” kidnaps the precious, angular Sprechstimme of Arnold Schoenberg’s “Pierrot Lunaire” and transforms it into an agonizing howl worthy of Edvard Munch’s “The Scream.”

And these “8 Songs” are not some Schubertian song cycle of discrete ballads set to pretty poems, but rather a continuous vocal tirade for bass and six instruments that runs the gamut of cries and whispers, shouts of mere gibberish and occasional discernable phrases. Davies’ librettist Randolph Stow took actual words of England’s King George III in his final years of insanity—his sons ruled as Regents—and fashioned them into a credible montage of bewilderment and self-pity.

Bass Walter DuMelle incarnated the mad monarch with frightening power, manically lost in his own world, yet occasionally interacting with members of the Fringe Festival audience with devastating presence. Two months ago DuMelle portrayed Baron Duphol in San Diego Opera’s production of Verdi’s La Traviata, but we heard little of his resonant bass voice in this presentation. We did see his stellar dramatic prowess in this highly charged monodrama. 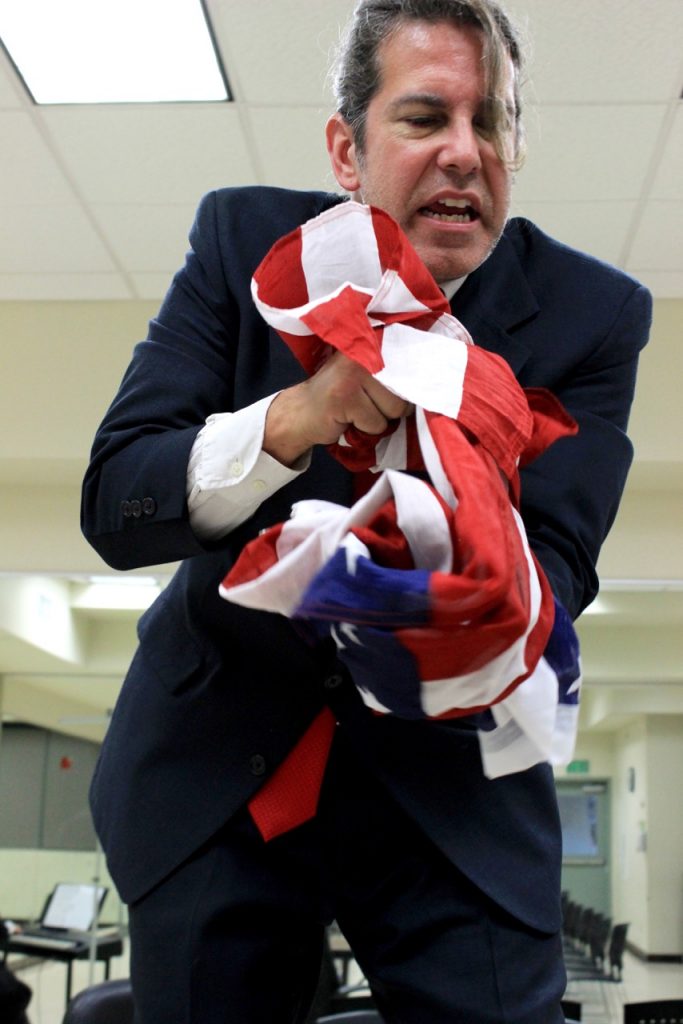 In a cavernous undercroft of the U. S. Grant Hotel, Bodhi Tree Concerts had set up a long banquet table, with audience members seated on each side, that also served as runway for the actor. Stage Director Kim Strassburger kept DuMelle in continuous motion, strutting, crawling, jumping off the table and remounting the table in ways that convincingly mirrored the dramatic surges of the music, deftly directed by Brendan Nguyen, who also served at the piano and various other keyboard devices. His musical crew, drawn largely from the graduate student ranks of UC San Diego’s music department, handled the complex score with laudable dexterity and amazing ensemble.

I would be remiss if I did not report the political overtones of this exemplary production. DuMelle was dressed not as an English monarch, but rather in a contemporary dark business suit, white shirt, and a very, very, very long red tie. And he kept manipulating some small rectangular object held tightly in both hands. Costumer Pamela Stompoly-Ericson was being very coy, n’est-ce pas?

I fear that my readers will raise a skeptical eyebrow—or start rolling their eyes—when I explain how tweeting actually relates to ancient King George III, but here goes. The eight songs in Davies’ title actually refer to eight very specific tunes found on a mechanical chamber organ owned by George III that is extant. The purpose of these tunes was not so much to entertain the monarch—like those grand pieces Mozart wrote for the musical clocks of his wealthy Viennese patrons—but rather to attempt to teach the monarch’s caged bullfinches to sing traditional English songs. The songs were meant to teach the birds to . . . tweet. You may now remove your hand from your forehead.

And unlike most performances today, where a recorded announcement prior to a concert begs the audience members to turn off their cell phones, Bodhi Tree Concerts requested all audience members to pull out their phones, log onto the specified channel set up by Interactive Designer Jason Ponce, and tweet their reactions to the performance, which were then immediately flashed on large screens placed along the sides of the table/runway.

It is with sheer dread that I predict this interactive function is the future of performance on these shores. My comfort, however, is my advanced age.

But kudos to Bodhi Tree Concerts for resurrecting this amazing work and staging it with such panache!

This performance was presented June 22-25, 2017, by Bodhi Tree Concerts in the Bivouac Ballroom of the US Grant Hotel, 326 Broadway in downtown San Diego. The June 25 performance was seen for this review.