Art of Élan’s bracing outdoor chamber concert last week offered yet another option for live performance under pandemic restrictions. Performing outdoors in the San Diego Museum of Art’s May S. Marcy Sculpture Court and Garden, the masked musicians could be placed in closer proximity to each other than indoor performances currently allow—but there was still no audience in front of the musicians. We took in music by Terry Riley, John Luther Adams, Jonathan Bailey Holland, and Hannah Lash streamed to our home computers. 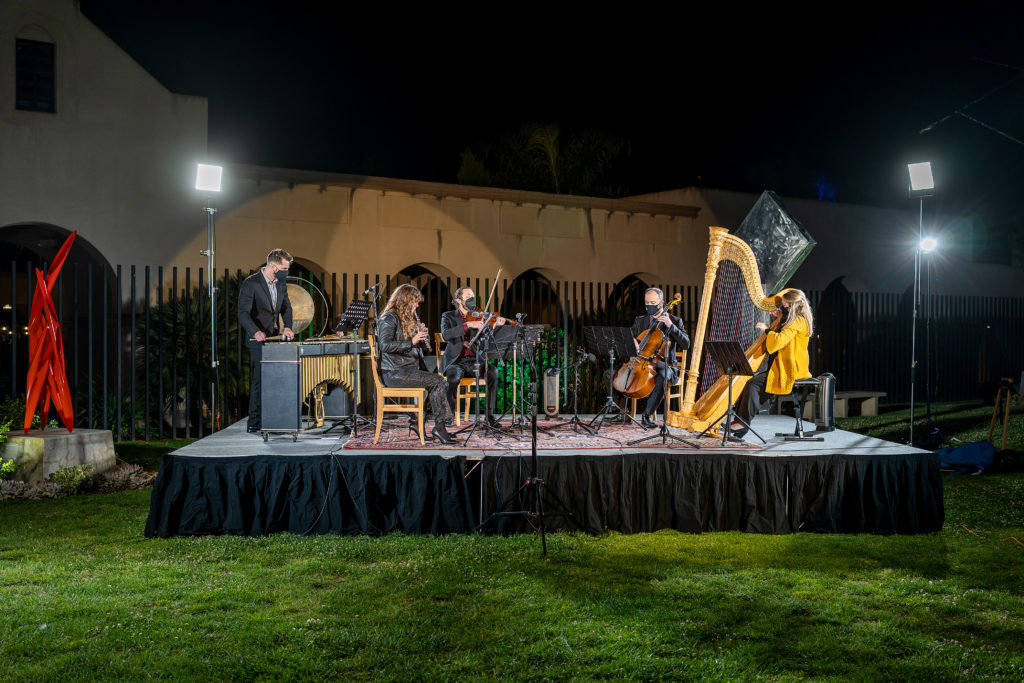 A couple of generations younger than the minimalist pioneer Riley, Holland demands more from his listeners. His “Forged Sanctuaries” comes into focus slowly as each string player tests lithe, discrete tones that eventually form astringent chords. Rather than pursuing thematic development, Holland juxtaposes textures formed by constantly varying string colors: some pure and shining, others edgy and even abrasive. But his undergirding structure proves as compelling as one might expect from the head of composition at Boston’s esteemed Berklee College of Music. Perhaps Holland’s sensitivity to instrumental color was nurtured by his Harvard mentor Bernard Rands, who graced our local musical scene with his brilliant multi-hued compositions when he served on the UC San Diego music faculty.

Although none of Adams’ movements approaches the drive of a buoyant allegro tempo, he easily conveys a confident sense of direction and deftly understated propulsion.

Art of Élan’s program also offered a single movement from Hannah Lash’s “Tree Suite” for harp solo, a work commissioned by the company and premiered on its January 10, 2017, concert.

The concert was first streamed on Tuesday, March 16, 2021, from the San Diego Museum of Art in San Diego’s Balboa Park.