If you are going to produce a rarely staged G. F. Handel opera, it is a good thing to have a few Handel operas under your belt. Opera NEO’s vibrant, superbly sung Partenope this past weekend (August 3 & 5) revealed how confidently the company has met the many challenges of making these Baroque operas as dramatically engaging as their rich musical scores. 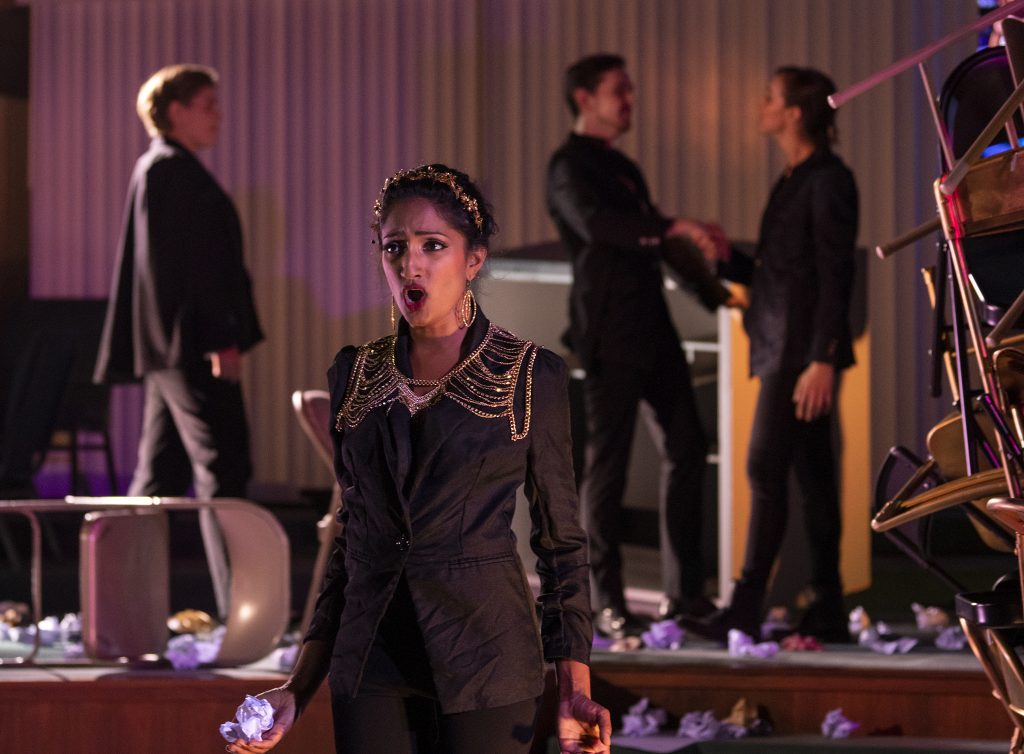 The Opera NEO Summer Festival presented worthy productions of Handel’s Agrippina in 2014 and his Rinaldo the following year, but under the musical direction of Benjamin Bayl and the stage direction of Alexandra Saulsbury, Partenope coalesced magnificently into a seamless, satisfying dramatic comedy propelled by a polished period instrument ensemble and singers who were able to communicate emotional depth through the composer’s florid technical display.

For his Partenope, written and first staged in London in 1730, Handel chose an obscure story about the mythological founding of the city of Naples by the siren Partenope—although the libretto always refers to her as Queen—and the trio of male lovers who pursued her affections. From her opening ornate aria, Maya Kherani’s Partenope sailed through Handel’s effusive coloratura with gleaming precision and impassioned conviction. She dominated this production the same way an excellent Violetta commands Verdi’s La traviata. 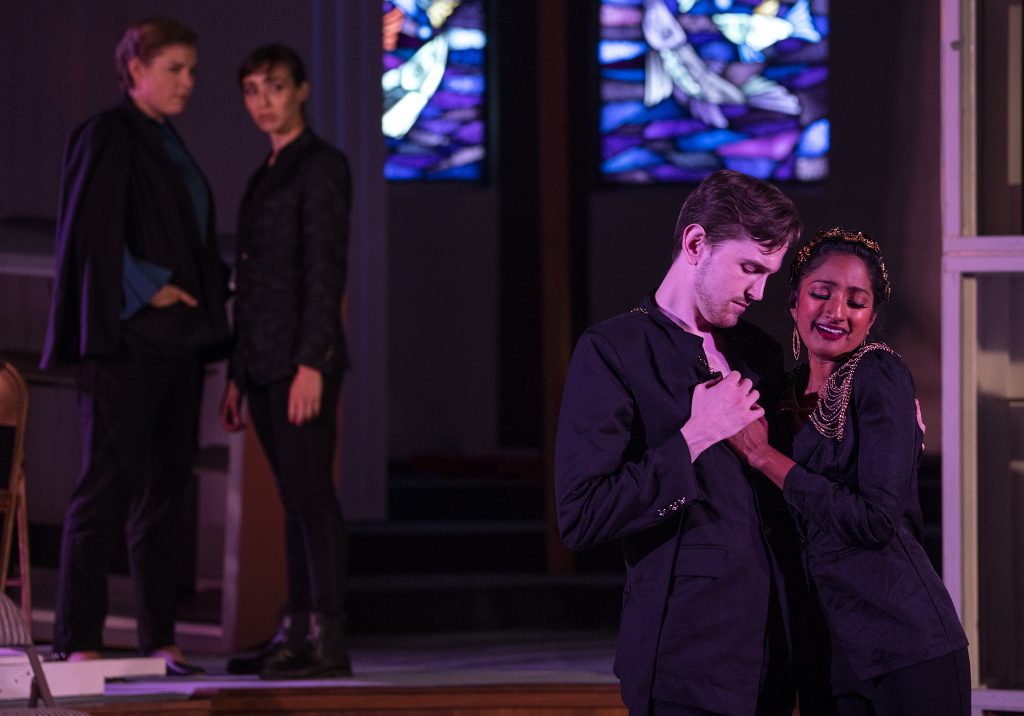 As the young Arsace, Partenope’s favored suitor, countertenor Bryce McClendon displayed equal ease with the idiom, although his lighter voice kept him vocally in Kherani’s shadow. But in his various solo arias he revealed a wide range of emotional states—in accord with what the Baroque aesthetic gurus called the “doctrine of affections.” 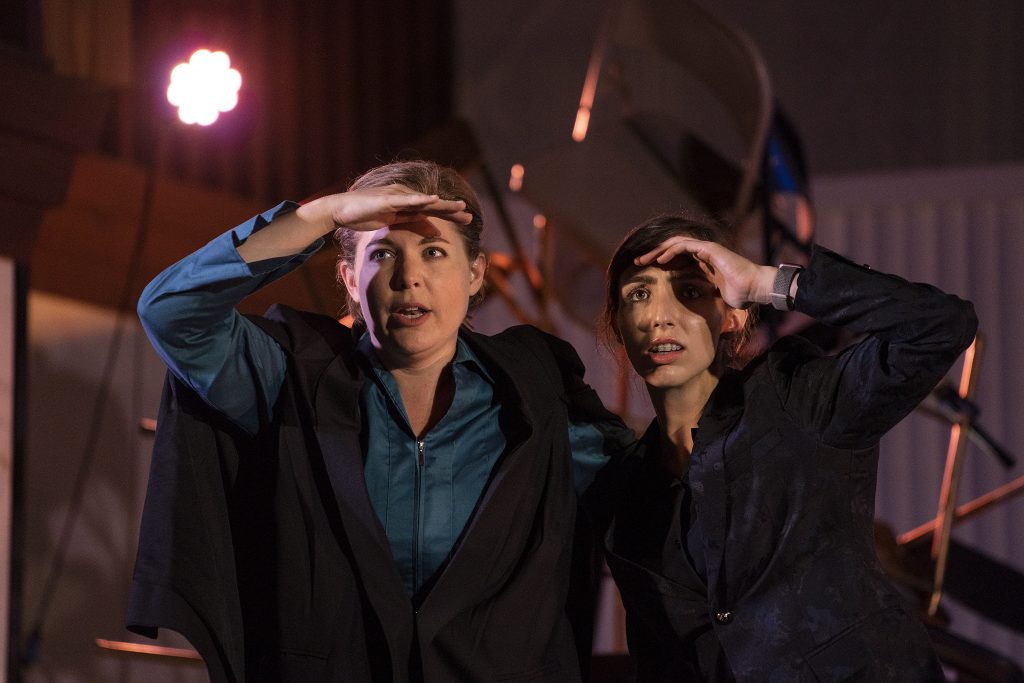 Kelly Birch, in the challenging role of Rosmira, Arsace’s former intended who shows up at Partenope’s court disguised as the shipwrecked male Eurimine, carried out valiantly all of the opera’s dramatic heavy lifting, a series of subplots to allow her to get even with Arsace and to place her protégé Armindo into Partenope’s arms. Her ample mezzo-soprano essayed well both coloratura flights and more stately lyrical assignments. It took a while for Sarabeth Belon’s Armindo to come into focus, granted that he is fated as the shy swain who needs Rosmira’s assistance to gain Partenope’s favor, but as the opera progressed her mezzo-soprano projected more color and her emotional communication became bolder. 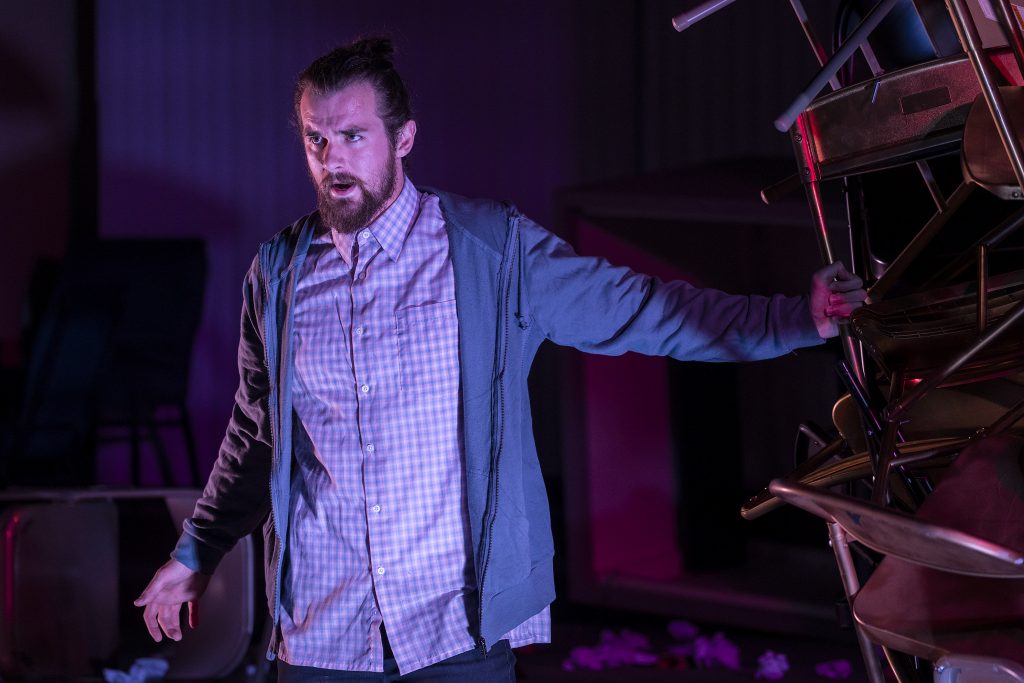 Handel’s slender plot needed more friction, so Emilio, the general from a neighboring city, arrives in Naples to boldly claim Partenope’s affection. When she rebuffs him, he launches an attack on Naples. But since this is not a tragedy, he does not succeed, is captured, and eventually departs on good terms with Partenope. William Ottow’s bright, muscular tenor and bold stage presence proved ideal for Emilio, traits he clearly demonstrated as King Egeo in last season’s Opera NEO production of Cavalli’s Giasone. Bass-baritone Patrick Murray, fresh from his leading role as Zeta in Opera NEO’s The Merry Widow, filled the minor role of Ormonte, Partenope’s chief courtier, with aptly subdued and darkly sonorous attention.

Playing at a lower, typical Baroque pitch, Bayl’s 24-member period ensemble crafted an unusually warm, resonant sonority that gave a kind of comforting halo to the composer’s unrelenting melodic drive. Conducting from one of the harpsichords, Bayl moved through the score’s collage of ensembles and arias with exquisite attention to the dramatic pace and dynamic contrast. He subtly kept his expert but overeager violins from covering up the singers, yet he encouraged generous, full-bodied ritornellos for full orchestra. Michael Sponseller, whose adroit keyboard work has enhanced so many Bach Collegium San Diego concerts over the years, served as both Assistant Conductor and the resourceful primary harpsichordist.

Like Bayl, Stage Director Alexandra Saulsbury was sensitive to pacing and kept the cast in meaningful motion, avoiding the static torpor of so many Baroque opera productions. Her most clever contribution: instead of attempting to employ realistic weapons for the battle scene between Emilio and Partenope’s forces, Saulsbury had the participants wad up large sheets of paper into balls and throw them at each other. It not only added a humorous edge to the scene, but it allowed Handel’s music to completely communicate the mood of combat.

Mark Kanieff’s fanciful set design made extensive use of folding chairs, including Partenope’s throne and a high, abstractly configured wall of chairs that stood behind her throne. Neither I nor my guests could explain the small, self-contained study cubicals stacked at various parts of the stage. Michelle Yang Xiao’s colorful lighting design compensated for the vague stage set, using appropriate colors to focus the tenor of the stage action.

Vanessa Stewart struck a contemporary casual look with her costumes, although Partenope’s gossamer ensemble—topped with a flowing, vest-like cape—could have been anything from ancient to space-age. Since several of the characters communicated on cell phones, Stewart’s contemporary look certainly fit the occasion.

With this Handel production, Opera NEO has firmly confirmed its early music credentials, using the best understanding of period practice to make these early 18th-century operas as compelling and musically exciting as any of the verismo favorites of operatic standard repertory.

George Frederick Handel’s opera “Partenope” was presented by the Opera NEO Summer Opera Festival and Workshop at Palisades Presbyterian Church, 6301 Birchwood, San Diego, CA, on August 3 & 5, 2018. The August 5 performance was viewed for review. The Opera Festival continues on that site through August 12 with productions of Mozart’s “Idomeneo” and Lehár’s “The Merry Widow.”