A portion of the reliable audience for chamber music could care less about new music, and the number of empty seats at Sunday’s (August 14) La Jolla SummerFest concert devoted to festival commissions gave mute testimony to this fact of musical life. But to the faithful in attendance, SummerFest Music Director Cho-Liang Lin introduced this program with a salute to the 55 works commissioned by SummerFest since 1999.

The concert opening work, Augusta Read Thomas’ “Bells Ring Summer” for solo cello from 2000, suggested that early SummerFest commissions tended to the perfunctory. Cellist Felix Fan put muscle and sonic allure into this short fanfare and made the most of its searing, linear themes, but just when I hoped it would bloom into something worthy, it cadenced, and Fan took his bow. 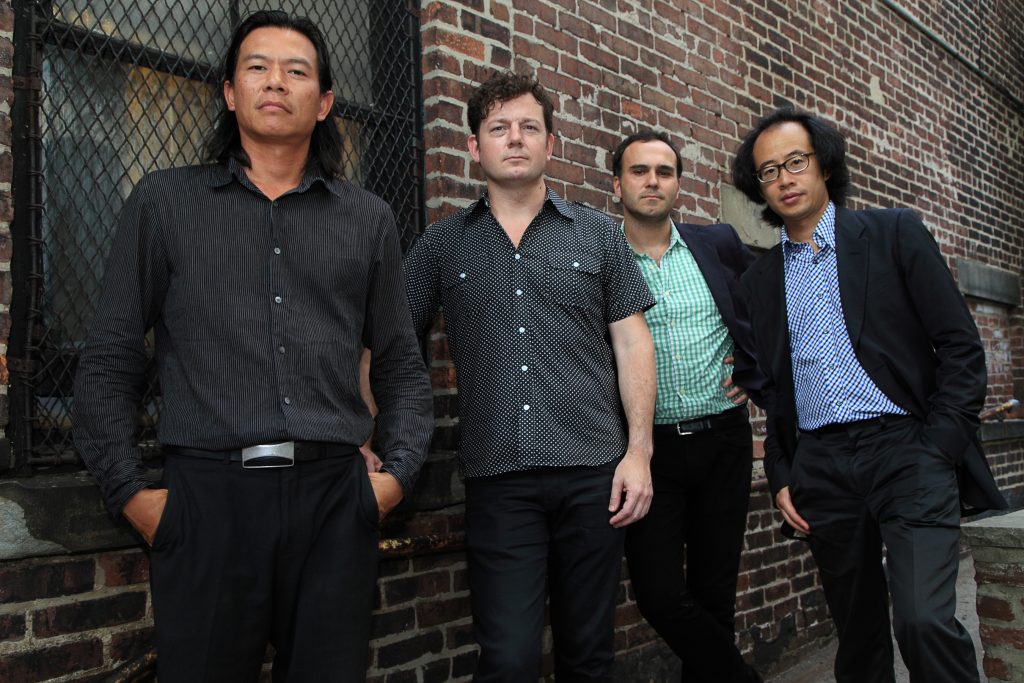 Sean Shepherd’s String Quartet No. 2, on the other hand, had no shortage of invention and displayed welcome organization. Playing this recent (2015) work’s west coast premiere, Fan’s FLUX Quartet gave the Sherwood Auditorium audience a robust account, relishing and carefully balancing its segments of slowly moving clusters as well as energizing its tiny motor ryhthms that propelled the faster sections. A disciplined neo-modernist with a high tolerance for dissonance, Shepherd appears to have resisted the easy formulations of minimalism in his Second String Quartet, but I would want ot hear more of his music to define his style more precisely. The other members of FLUX are violinists Tom Chiu and Conrad Harris; Max Mandel is the violist.

In George Tsontakis’ 2009 “Stimulus Package” written for cello, piano, and percussion, the composer opted for a title snatched from newspaper headlines following the government’s response to the 2008 Recession. But the composer’s musical source was the traditional Greek folk music he heard performed when visiting his Cretan grandfather. Like the Armenian-American composer of the last century Alan Hovhaness, who turned to his ethnic heritage to inspire his earliest works, Tsontakis interpreted the music of his roots in his own rhapsodic, eclectic post-modern idiom.

In most of the sections of Tsontakis’ extended work, Fan’s cello assumed the role of the Cretan vocalist, intoning and elaborating on passionate primitive song, accompanied by static ostinatos from John Novacek on piano and Aiyun Huang on vibraphone. For contrast, the trio erupted in raucous dance riffs, incited by Huang’s asymmetical drumming. The earthy, hypnotic quality of “Stimulus Package” appealed to the audience, which gave the piece a rousing reception.

Another work on this program also drew on the composer’s heritage, Richard Danielpour’s Clarinet Quintet “The Last Jew in Hamadan,” a tribute to the culture of the Iranian city of Hamadan, in which the American-born Danielpour’s father and grandfathers were born. Prior to the 1979 Iranian revolution, Hamadan, the place where the Biblical Queen Esther is buried, boasted a thriving Jewish population.

Reading in the New York Times about the exodus of Jews from Hamadan inspired Danielpour to write his quintet, which he finished last year. Performed with great conviction by the Vernoa Quartet and clarinetist Bert Hara, the quintet suggests both the ecstatic dances of whirling Sufi dervishes in the strings and the wail of a klezmer band in its doleful clarinet solos.

A regular soloist with SummerFest in recent season, Hara’s beautifully shaped sonority and the purity of his melodic line are well known, but in some of the more rapid passages of this quintet, he allowed just a touch of that characteristic klezmer clarinet squeal to surface. In my book, that is class—to play just below your level for the sake of stylistic truth. The Verona Quartet displayed again the discipline and sonic balance that made Anton Webern’s “Six Bagatelles” so winning last week, and First Violinist Jonathan Ong’s eloquent solos matched Hara’s with uncanny resemblance. The other members of the Verona Quartet are violinist Dorothy Ro, violist Abigail Rojansky, and cellist Warren Hagerty.

The FLUX Quartet also premiered David Lang’s new (2014) String Quartet “almost all the time,” a 20-minute, single movement quartet with minimalist iterations in homage to Philip Glass and moments of dense meditation worthy of Messiaen. But the balanced structural architecture of the quartet is pure David Lang, which FLUX unfolded with cool equanimity.

[themify_box style=”Shadow” ]This concert was presented by the La Jolla Music Society on Sunday, August 14, 2016, at the San Diego Museum of Contemporary Art’s Sherwood Auditorium. SummerFest continues in that venue through Friday, August 26, 2016.[/themify_box]