At the Mingei International Museum’s open house Sunday afternoon, visitors streamed through architect Jennifer Luce’s spare but elegantly redesigned museum interior while members of Art of Élan enlivened the viewing with their music. Stationed in three different parts of the museum, the duo of violinist Kate Hatmaker and cellist Alex Greenbaum, as well as violin soloist Jing Yan Bowcott and harpist Julie Smith Phillips repeated short sets of spirited music, to which some museum visitors gave their entire attention while others simply allowed the pleasant sounds to accompany their viewing of the museum’s many treasures. 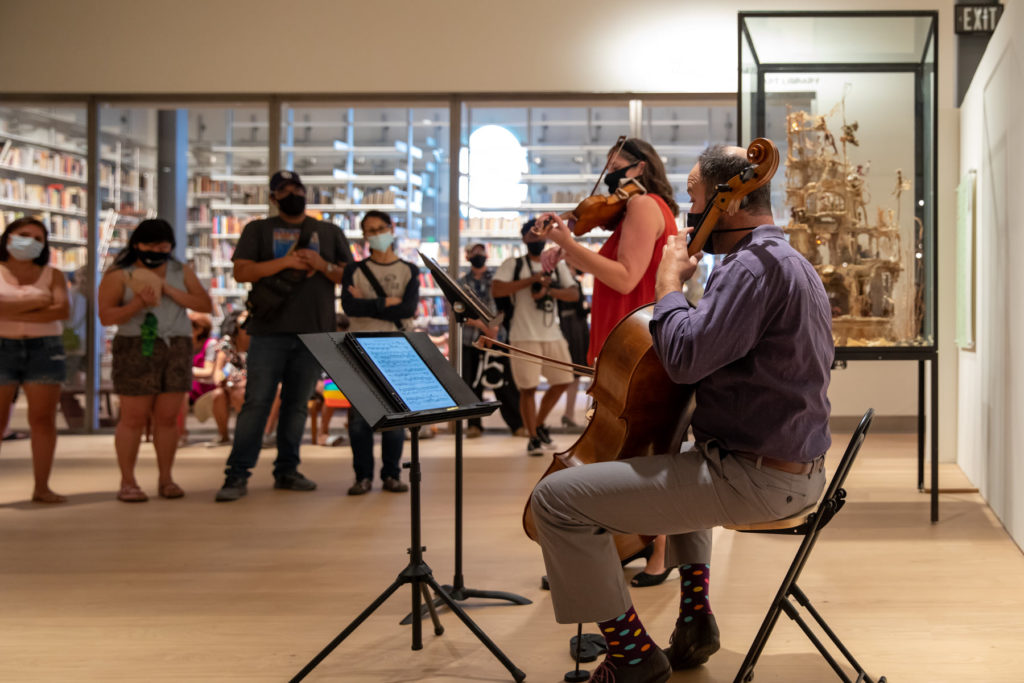 Towards the end of the afternoon, Art of Élan gave a short concert of mid-20th-century European chamber music in the museum’s beautiful new concert and lecture hall. Located on the lower level, the new hall’s floor to ceiling glass side wall looks out to one of Balboa Park’s charming gardens, filling the room with light—as did Art of Élan’s musical fare.

Hatmaker and Phillips made a persuasive case for arranging Béla Bartók’s “Romanian Folk Dances” for violin and harp, originally a piano suite. Hearing Hatmaker’s strong, angular melodies one can easily imagine a rustic fiddler accompanying his village mates, and the bright ring of Phillips’ harp conjured the sharp sound of the cimbalom, a type of hammered zither popular in Middle Europe.

Polish composer Grażyna Bacewicz spent most of her career exploiting a flinty modernist style that never came close to satisfying the aesthetic requirements of the Communist Party, but even her 1945 Duos for Two Violins displayed an uncompromising structural austerity. Hatmaker and Bowcott gave these duos a spirited urgency that could be called charming, a descriptive term that rarely enters my mind when hearing pieces by Bacewicz.

Hatmaker and Greenbaum ended the program with “Duettino,” a winning piece written for them by the contemporary British composer David Bruce. Back in 2014 Bruce was in residence with the San Diego Symphony and wrote several works for the orchestra, including a sterling Violin Concerto titled “Fragile Light.” Although his “Duettino” hardly presses against the borders of conventional harmony, it breathes a fresh, robust spirit, and it was a joy to hear these two musicians revel in its confident mastery.