In Tribute to Astor Piazzolla, San Diego’s Camarada ensemble filled La Jolla’s Baker-Baum Concert Hall Thursday (Feb. 27) with the scintillating rhythms and sharp accents of Argentine tango. Camarada’s instrumental quintet, anchored by Uruguayan bandoneon virtuoso Raul Jaurena, featured Venezuelan vocalist Marga Mitchell and was augmented by a pair of dashing young tango dancers that enchanted the Baker-Baum audience for two hours of vibrant music and dance. Camarada first brought Jaurena to San Diego to assist the ensemble with their all-tango concert at the Mingei International Museum in February, 2018, and his return for this Piazzolla program was not only welcome but necessary. After all, you cannot simply phone the Musicians’ Union here in San Diego (local 325, if my memory serves me) and ask them to send over a skilled bandoneon player! 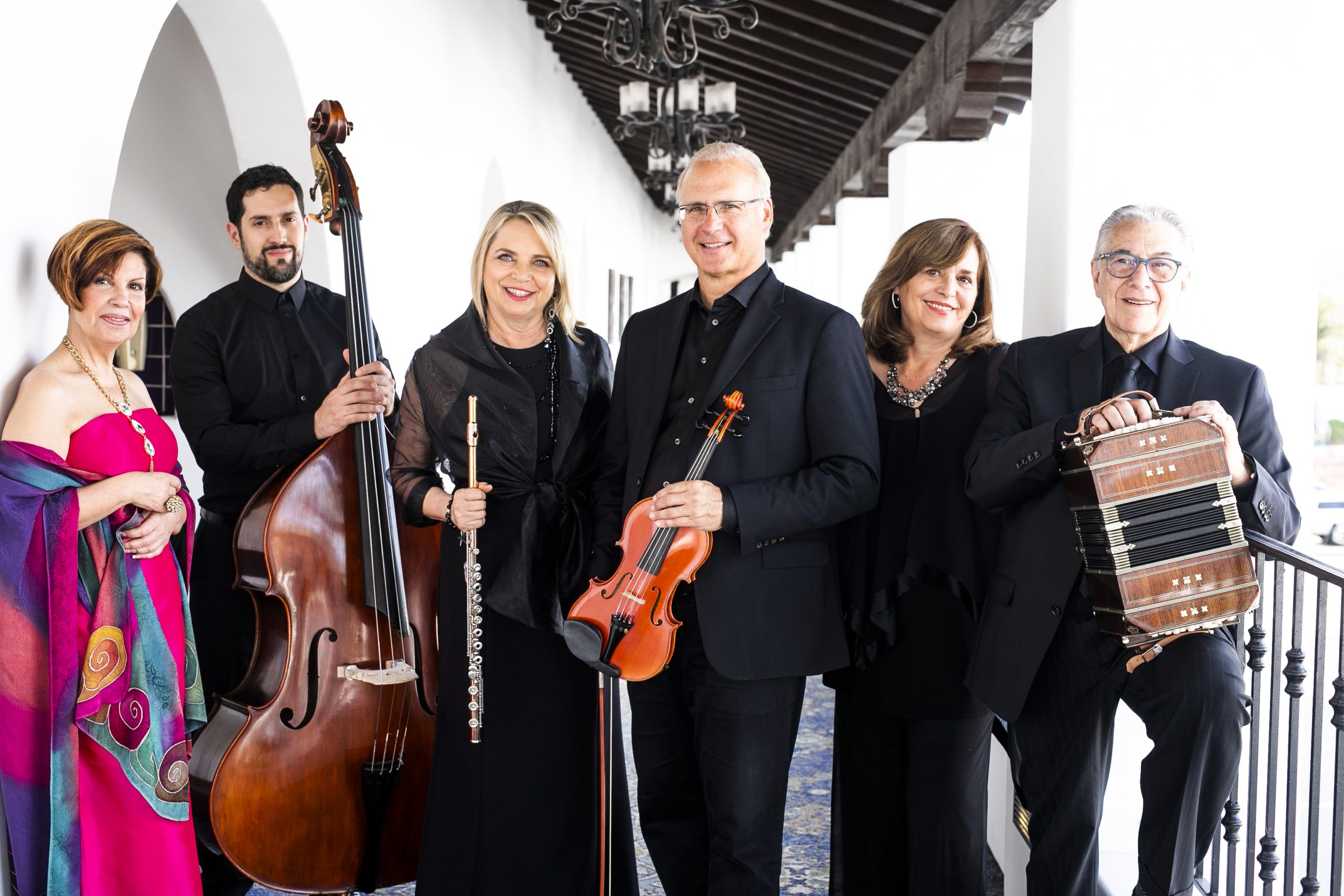 The heart of Camarada’s program was Piazzolla’s Estanciones Porteñas, also known as The Four Seasons of Buenos Aires—a tango written to portray each season in the composer’s adopted hometown. Appropriate to San Diego’s balmy February weather, the quintet began with “Primavera Porteño,” an animated tango decked out in vibrant counterpoint. Pianist Dana Burnett’s brittle, angular flourishes challenged the sweet themes spun out by flutist Beth Ross Buckley, and fizzy chords from Jaurena’s bandoneon occupied the no-man’s-land between them. Signaling winter, “Invierno Porteña,” Andres Martin’s deep, soulful theme blossomed from his contrabass only to be taken up by the bandoneon and extended by the other quintet members. Like most Piazzolla tangos, “Invierno Porteño” sports a ternary structure, but it is exceptional because the middle section is the lively portion. This tango’s outer sections suggest an introspective seasonal melancholy only understood by those who grow up in places that experience real winter!

The unrelenting intensity of “Otono Porteño” conjures the brisk winds of a changing season, and this is perhaps Piazzolla’s most bravura seasonal tango. Its fury includes a bracing bandoneon cadenza and a generous supply of determined violin and contrabass pizzicatos, executed with flare by David Buckley and Martin, who added touches of percussion by slapping the back of his instrument. Piazzolla’s summer tango, “Verano Porteño” offers none of the excitement that Vivaldi captured in his summer movement. Instead, Piazzolla conjures a stormy season, pushed by a defiant bass line, insistent flute figurations, and sighs from the bandoneon. I savored David Buckley’s csárdás-like violin riff and pensive cadenza. Towards the end of “Verano,” Piazzolla gives the flute a few hopeful themes—at last a time for respite and recuperation!

A few non-Piazzolla tangos offered modest contrast, including the concert opening, jazzy “Noches del Odeon” by Toto Damario, the piece that opened Camarada’s 2018 tango fest, and Jaurena’s own sultry “A Miguel Angel,” also from the 2018 program.

The musicians wisely gave half of The Conrad’s generous stage to the dancers, Carolina Jaurena and Juan Alessandrini, whose bold, tangos proved as angular, incisive, and smoldering as Piazzolla’s musical themes.

This concert was presented by Camarada on February 27, 2020, at the Conrad Prebys Performing Arts Center, 7600 Fay Ave., La Jolla.