Joseph Waters opened the 24th installment of his NWEAMO contemporary music festival Friday with a concert in San Diego State University’s (SDSU) Smith Recital Hall. Curated by New York-based composer Gene Pritsker, his program matched the variety of compositional approaches we have come to expect from NWEAMO, although Friday’s trio of performers suggested a significant downsizing from the times when the phalanx of festival musicians filled the ample Smith Hall stage. 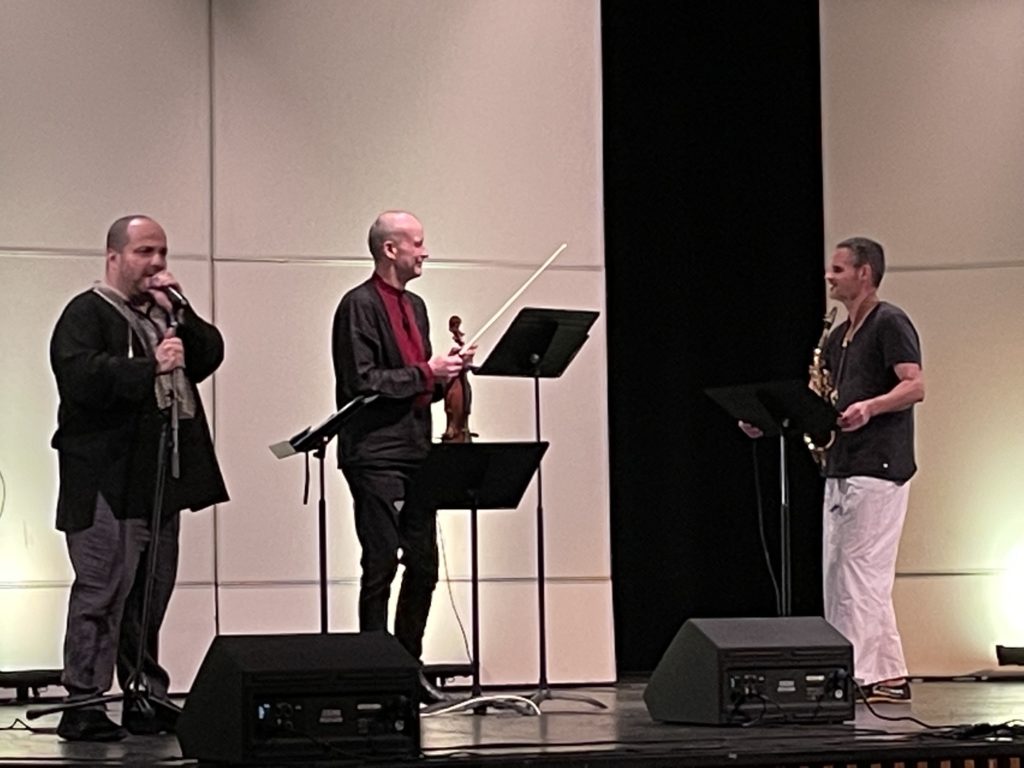 Pritsker offered two movements from his “Duets for the End of the World,” a title that salutes Olivier Messaien’s iconic 20th-century “Quartet for the End of Time.” Pritsker’s opening movement of the Duet grounded Rewoldt’s languid but haunting alto saxophone themes in his own edgy guitar ostinato. If the Duet’s second movement began with a similar guitar ostinato, it quickly evolved into violent licks that engaged both guitar and saxophone in highly charged dueling motifs that eventually resolved in exalted parallel declamations.

With Russia’s war against Ukraine dominating the news reports, it came as no surprise that Ukraine figured prominently in Friday’s programming. Waters’ “Anguish — Compassion — Grief” saluted Ukraine’s current suffering with a dark modal trio for guitar, violin and saxophone. This rigorous yet compelling contrapuntal feat not only depicted the emotions inscribed in the title but also evoked the structural majesty of J. S. Bach’s Art of Fugue.

Pritsker’s “The Will” spliced segments of recorded voices from a Ukrainian women’s chorus into the agitated, pointillistic texture of his poignant instrumental trio. The composer suggests strains of a military march mixed with mournful ballads, as if muted, distant voices had been released from some tectonic shift deep within the earth.

A similar emotional portrait emerged in Aaron Alter’s “ Lament Prayer and Renewal” for guitar and saxophone, although this composer’s idiom invoked the slow, steady beat and desolate moan of the blues, a style and sonority Rewoldt conjured with unfailing finesse and Pritsker’s guitar supported with drive to spare.

At the far pole from Pritsker’s dense scores, two movements from Texu Kim’s “Images” for solo violin suggested a more primal musical soundscape. In one movement, the Korean composer, a recent addition to the SDSU music faculty, required from Krysa discrete, astonishingly short, quiet tones that verged on the inaudible, ornamented only by subtle harmonics. In the second movement, Krysa emitted quick splinters of tone and highly compressed figures, initially quiet but in the end sounding with welcome vigor.

Dan Cooper, CommpCord Ensemble’s resident bass guitarist, provided Rewoldt with a virtuoso solo etude titled “TBA,” filled with the genre of musical calisthenics that he delivered with predictable but nonetheless gratifying elan. Cooper’s texture was so thick, at times it appeared that the musical answer to a phrase was already superimposed on the phrase as it was executed.

Madelyn Byrne’s trio titled “Coffee,” a clever tribute to the composer’s beverage of choice and its effect on the drinker, saluted the dark blend Robusto Italiano with an animated but sultry dance and treated Grazioso Viennese with another dance in more graceful, lighthearted triple meter. Debra Kaye’s “Bagatelle No. 1,” a cheerful, inventive ballad for saxophone, violin, and guitar, ended the NWEAMO concert with an air of casual sophistication.

San Diego State University Music presented this opening concert of the 2022 NWEAMO music festival in the school’s J. Dayton Smith Recital Hall on Friday, April 29, 2022. The festival concludes with another concert on Sunday, May 1, 2022, at The Jazz Lounge, 6818 El Cajon Blvd., San Diego.