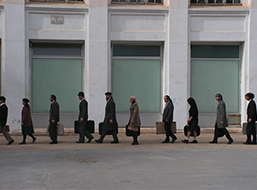 The Pied Piper’s tune was so irresistible that rats followed it to their deaths, and the children of Hamelin skipped after the Piper into a mountain tomb. Kamchàtka exercises a similarly spellbinding – though, thankfully, not fatal – allure. Eight members of the Barcelona-based theater troupe are here for La Jolla Playhouse’s WithOut Walls (WoW) Festival. Last night, where Kamchàtka led, I followed. And the journey raised juicy questions about dissolving the fourth or possibly the fifth wall and turning theater into life.