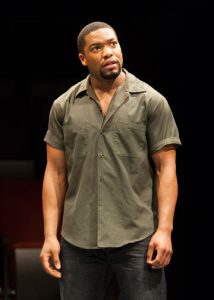 The Brothers Size, Tarrell Alvin McCraney’s first professional play, announces Mr. McCraney as a creative and complex thinker who challenges audiences with simple stories on classic themes whose surface glosses a wealth of meaning underneath. The Old Globe’s production leaves its audiences breathless, unsettled, and aching for more.

The middle play of a trilogy collectively titled, The Brother/Sister Plays, The Brothers Size explores African American masculinity through the lens of Yoruba spirituality, a set of West African cultural and religious practices that slaves kept alive via passing stories from generation to generation.

The Size brothers, Ogun (Joshua Elijah Reese) and Oshoosi (Okieriete Onaodowan), have been reunited following Oshoosi’s return from prison. Oshoosi is having trouble adjusting to life outside of prison, and his sleep has been fitful and full of dreams. Now, dreams are considered to be messages from the spirit world, and there is a significant dream in each play of the trilogy (the other two plays are In the Red and Brown Water and Marcus, or the Secret of Sweet).  But, these dreams need interpretation for their significance to be known, and it is women who interpret dreams. There are no women in the Size brothers’ world, and so Oshoosi’s dream (and, later, Ogun’s dream) go without interpretation. 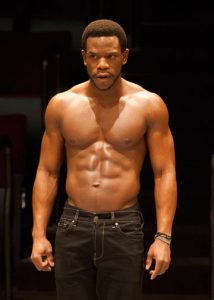 The names of the brothers are drawn from Yoruba mythology, and the qualities of the deities for whom they are named pretty much describe their characters.  The deity Ogun is the blacksmith, a solid citizen who works with hard metals, and Ogun Size owns a car repair business on the outskirts of a Louisiana bayou town. Oshoosi, on the other hand, is a wanderer, who bends and sways like the forest in which he wanders, often alone.

The brothers are joined by a third character, Elegba (Antwayn Hopper), a young man who is also returning from prison. The Yoruba deity Elegba is the trickster, a shape-shifter whose actions can teach lessons to others. Elegba clearly has a hold on Oshoosi, who he came to know well while the two were in prison together.

The play opens with a pile of stones on the floor, a reminder of another deity, Shango, the representation of all that is masculine. In a recapitulation of the plot highlights of In the Red and Brown Water, Ogun reveals that Shango stole Oya, his love, from him, with tragic results and leaving Ogun alone and emasculated. Early in the play, Ogun draws a story circle (also called the “Circle of Life” – yes, the same one that serves as the opening number of The Lion King) around the rocks, and director Tea Alagić has staged all the action either deliberately outside or deliberately inside the circle. Only, Ogun’s circle is made with sand, not metal, and it can be destroyed easily.

Oshoosi’s confusion about “life on the outside” extends to his sexuality, and Elegba, who appears shirtless throughout this production, is only too happy to feed that confusion.  Elegba’s image is the moon, which is never quite the same each time it appears. 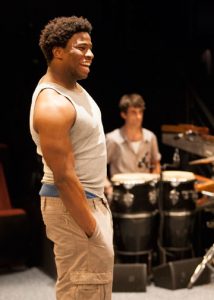 Ogun is the only character who appears in all three plays, and his constancy and strength anchors the trilogy. Mr. Reese is a veteran of productions of The Brother/Sister Plays, and his performance anchors this version of The Brothers Size.  By singling him out, however, I do not wish to diminish the performances of Mr. Hopper and Mr. Onaodowan, both of whose work is admirable.  I should not fail to mention the contributions of Jonathan Melville Pratt, whose live African drumming and original music create an aural environment that is as spare but also as meaningful as the production’s physical environment.[php snippet=1]

While the Old Globe is to be congratulated for introducing San Diego audiences to Mr. McCraney’s work, I do wish that we could see all three plays of the trilogy presented together.  Two of the plays are running concurrently in Southern California, but unfortunately, there’s no sign of an area production of the 70-minute Marcus, or the Secret of Sweet.  If you’re curious and willing to travel, there is an excellent production of In the Red and Brown Water playing through February 24 at the Fountain Theatre, in Hollywood.  The Brothers Size closes its run on that date as well.

Nevertheless, we shall see more from young Tarrell Alvin McCraney, and our cultural lives will be enriched by his presence among us.