Due to the severe restrictions imposed by the current pandemic, the San Diego Symphony—along with the other local performing arts organizations—has not had much to celebrate over the last year. But the mood at yesterday’s event at the symphony’s traditional Summer Pops site in Marina Park on San Diego Bay was positively exuberant. 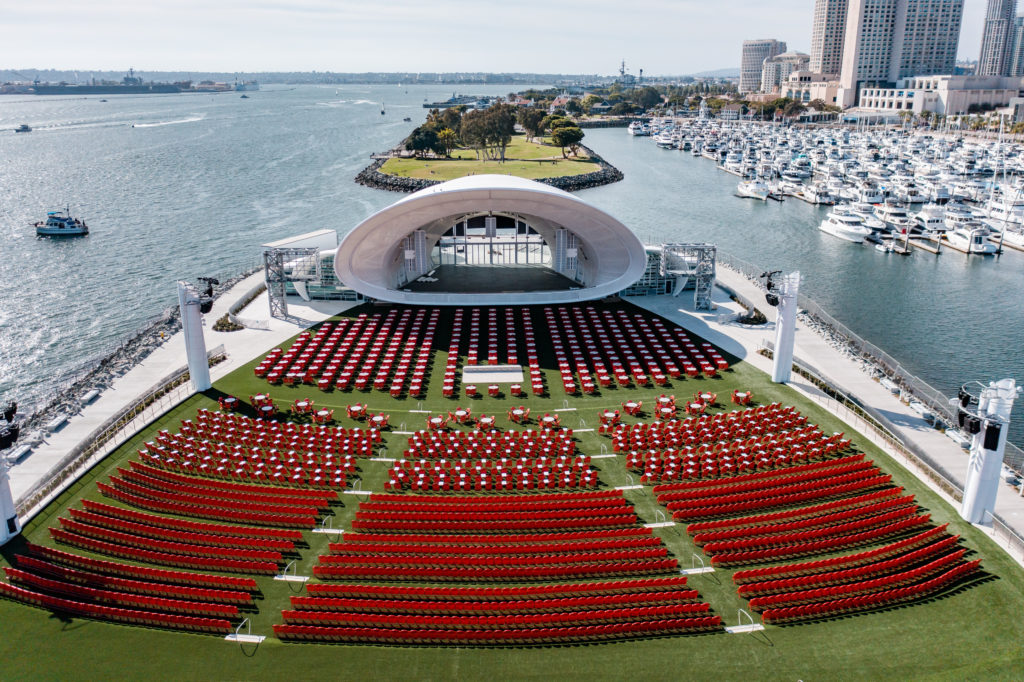 To an audience of symphony donors, Port Authority officials, and members of the press, San Diego Symphony C.E.O. Martha A. Gilmer unveiled the symphony’s new $85 million permanent performance facility: the Rady Shell and Jacobs Park, honoring the two major donors, Ernest and Evelyn Rady ($15 million) and Joan and Irwin Jacobs ($11 million). Significant donations are also reflected in naming the central gathering space Prebys Plaza in honor of the late Conrad Prebys and the Conrad Prebys Foundation. And the onstage performance area has been named the Una Davis Family Stage in honor of Una Davis.

This imposing new facility replaces the temporary stage and seating the symphony has set up each summer for the last decade to present its annual Summer Pops season. Like the fabled Hollywood Bowl, however, the Rady Shell will present a wide range of performance possibilities, although the excited Music Director Rafael Payare was prevented from outlining his ambitious programming until next week—May 21—when the symphony will announce the specific programming, slated to run from the beginning of August through early October (according to my sources).

Gilmer stressed that this beautifully designed and welcoming facility would not be restricted to musical performance. “Eight-five per cent of the time, this park will be open to the public. We hope this place on the bay will be a destination for families to come and enjoy even when we are not playing music,” she said.

In her remarks, Gilmer also revealed that she and Joan Jacobs had selected the bright red-orange color of the permanent seating, which contrasted vividly with the deep green artificial turf that covered floor of the seating area.

The Thursday event opened with five symphony musicians playing a bubbly Piazzolla piece onstage as a prelude. A truer revelation of the site sonic possibilities will be offered in the first streamed concert next Friday, May 21, at 7:30 p.m., conducted by Music Director Payare:

Gilmer explained that the funding of the new outdoor site has been part of a five-year $125 million campaign that also includes improvements to the symphony’s downtown San Diego home, the Jacobs Music Center, and to bolster the orchestra’s longterm financial stability. She said that campaign has already raised $98.7 million of the goal.

A welcome amenity unmentioned by Gilmer is the facility’s permanent set of restrooms, cleverly tucked into an unobtrusive ground level location near the entry to the park. The portable facilities that were brought in to the former Summer Pops site will not be missed.