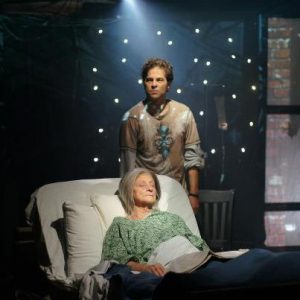 As a child I liked singing that old revival song “Blest Be the Ties that Bind,” but with adulthood came the realization that binding ties may bring about the opposite of blessing. Stephen Adly Guirgis’ 2008 play “The Little Flower of East Orange,” which San Diego’s adventurous ion theatre company opened Saturday (Nov. 17) in Hillcrest, is a cornucopia of tortured family relationships blighted by substance abuse, alcoholic co-dependency, life-long grudges, and chronic manipulation.

But I cannot believe that Guirgis would have written this autobiographical play if he had not seen blessing underneath the scarred exteriors of this broken family. Therese Marie, a long-suffering, aging Irish-American mother played with remarkable stamina and pluck by Trina Kaplan, is hastening her earthly departure with grand guignol antics that she believes will bring her and her two adult children—both lost and highily damaged souls—into some grand reconciliation.

But fence-mending has never been a skill anyone in this family has acquired. Son Danny—the writer, the poet—is ardently devoted to his mother when he is far away getting high with a new girlfriend, but back in New York in the same room with mom, his temper flares constantly. Ion company regular Jeffrey Jones fused rage and vulnerability into Danny with such high voltage that he simultaneously kindled and quashed empathy, which I infer was Guirgis’ intention.

For reasons only sketchily revealved, daughter Justina has felt unloved and unwanted in this tight family circle, so her efforts to [php snippet=1]rescue Danny and Therese from their psychological kickboxing tournament are marinated in disgust and self justification. Catalina Maynard, who just completed for ion theatre the title role of “Julia,” another harridan star turn, needed only to warn up some leftover umbrage and disdain from Julia to give Justina her requisite character.

When the play opens, Therese is bedded in a hospital I.C.U. surrounded by a covey of individuals attempting to pry her identity from her. How she achieved this injured and anonymous state involves a set of unlikely contrivances I am reluctant to divulge, but they are all part of mom’s ploy to get Danny back to New York from his rehab residency in Arizona.

These auxilliary characters serve two purposes: they advance the modest plot and give the playwright ample opportunity for some 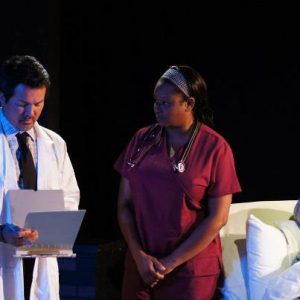 mildly indulgent racial profiling. Diep Huynh gives the proper amount of smug exasperation to the Indian (what else?) physician Dr. Shankar, who absent-mindedly calls the African-American nurse Magnolia, “Mongolia.” However, Yolanda Franklin’s caregiver deftly modulates the pace of her dialogue to let us know Magnolia is a pragmatic judge of the human condition, and not some saintly Mother Teresa.

Claudio Raygoza appears to be having an inordinate amount of fun incarnating the cynical, pushy Domincan orderly Espinosa, who chortles as he convinces a naive Anglo bystander, played by Glenn Paris, that the Spanish word “puto” is a term of endearment. To watch the co-directors of the play and the ion company in such absurd comic relief is indeed rich. Melinda Miller’s Nadine, Danny’s latest inamorata, appears to have picked up her facial expressions from watching old Judy Holliday movies, which, if true, would certainly be a worthy crib.

Stage direction by Paris and Raygoza is swift and seamless on their postage stamp of a stage, and it rarely feels constrained. But when Danny and Nadine copulate athletically while seated in a small chair at a far corner of the stage, such a scene cries out for some special award for extreme economy of staging. Mary Summerday’s costumes aptly reflect the modest circumstances of Therese and her family, and Raygoza’s minimal set design is sufficiently functional, although the projections of elevated trains racing across the back of the stage give a realilsitic whiff of urban grit.

What intrigued me about this play is its theological subtext. Early on, Danny snarls, “I spit in the face of grace,” but later Therese professes that she finds abundant grace in the dawning of every day and its renewing possibilities. We learn that Therese is named after the popular 20th-century French nun St. Thérèse of Lisieux, who is known in Roman Catholic piety as “the little flower,” hence Guirgis’ title.

St. Thérèse professed that “my way is all confidence and love,” and it is quite possible that Guirgis’ title character actually sees herself in that light, even though her love for her family is frequently twisted in its expression. In “The Little Flower of East Orange,” Guirgis wrestles with the possibility of finding grace in the quotidian struggles of flawed relationships, a theme that rises above his plot and its predictable denouement. You may never find me booking a flight to Lourdes, but I would gladly return for devotions at this theatrical shrine to the little flower.

[box] Cast of “The Little Flower of East Orange”