San Diego has rolled out the welcome mat to women composers this fall with San Diego Opera’s premiere of Gabriela Lena Frank’s El último sueño de Frida y Diego and Sunday’s premiere of Jessica Meyer’s string quintet A Passage Between Earth and Sky for the Hausmann Quartet’s Haydn Voyages concert at the Maritime Museum.. In each case, the composer was present for the premier performance: last week Frank was on hand to counsel conductor Roberto Kalb and the singers in her new opera and Sunday Meyer performed the viola solo with Hausmann in this debut of her quintet. 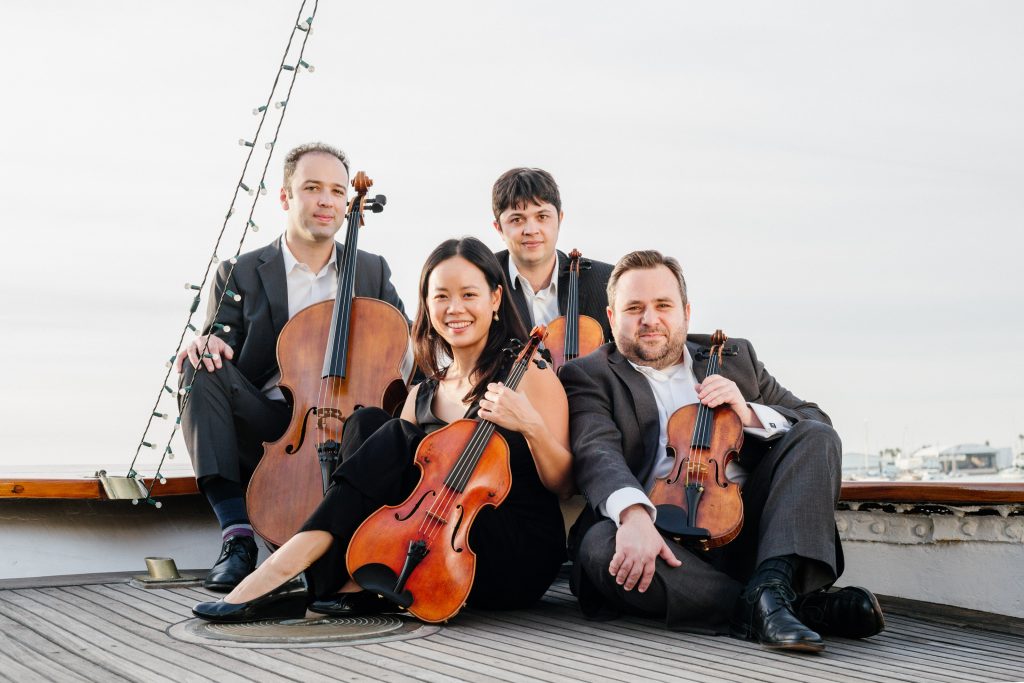 In her introduction to A Passage Between Earth and Sky, Meyer made clear the four movement work’s explicit program: her description and reaction to the removal of a large, well-loved tree in her community, a tree rooted in the earth with branches that reached to the sky—hence her descriptive title.

Like many other contemporary composers, Meyer displays a casual attitude towards tonality and modality. In soulful themes such as the lyrical duet between Meyer and Hausmann’s violist Angela Choong that opens the work, the composer embraces familiar tonal conventions, yet her second movement presents a nocturnal soundscape, a deft but static texture of bird calls and insect chirps, that does not rely on tonal progressions. This movement reminded me of Béla Bartók’s “night music” movements, but without his ominous overtones.

In “Dissevered,” the quintet’s third movement, cellist Alex Greenbaum put ample muscle into his angular, assaulting themes that symbolized the tree’s violent removal, although the rest of the strings quickly joined with equal vigor in this sonic melee. Meyer’s subdued finale, “Reverie of Renewal,” offered a collage of subdued, hopeful motifs to assuage the loss of the beloved tree.

The late Australian composer Peter Sculthorpe asserted that his music was all about the preservation of the environment as well as climate change, and his final String Quartet—No. 18 from 2010—paints a dire portrait of environmental destruction. Quartet No. 18 paired uncannily well with Meyer’s piece, from its opening mournful viola theme to its static sections of delicate “night music” filled with nervous insect and bird sounds. Sculthorpe also gave cellist Greenbaum muscular virtuoso flourishes in the middle movement, but I was equally moved by violinist Bram Goldstein’s plaintive solos played at a hushed dynamic level. Towards the end of the quartet, first violinist Isaac Allen sensitively wove the theme of the traditional English hymn “O God, Our Help in Ages Past” in his highest register into the work’s unexpectedly pastoral ending.

Perhaps George Walker’s 1946 “Lyric for Strings” too easily reminds the listener of Samuel Barber’s earlier–and over performed–“Adagio for Strings,” but Walker’s opus stands on its own merits as a well-crafted composition with sweeping, gently contrapuntal themes. Hausmann’s warm sonority and seamless ensemble gave the piece everything it needed.

No Haydn Voyage concert would be complete without its obligatory Haydn component, and Sunday’s offering was Haydn’s C Major Quartet, Op. 20, No. 2. Hausmann’s resident musicologist Derek Katz described this Haydn string quartet as arguably the most ebullient quartet in the composer’s vast quartet repertory, certainly a category brimming with competition, and it easily balanced the probing introspection of the Meyer and Sculthorpe works. Hausmann’s trademark sparkling ensemble playing coupled with graceful, stylish phrasing animated every movement of the work, especially the finale, an athletic four-voice fugue that brought the string quartet and the concert to a vibrant climax.