A host of understudies opened Hamilton’s 11 day tour swing through San Diego and reaped the reward of a standing ovation. This production, in its return to the Civic through November 20, was artistry in motion, and the roaring audience was ready to experience it.

Lin-Manuel Miranda’s Hamilton is somewhat of a household name after earning Tony, Grammy, Olivier and Pulitzer awards, and subsequently being filmed live and shared with the world via Disney+. The musical, based on Ron Chernow’s biography about the titular ill-fated politician and with musical supervision and orchestrations by Alex Lacamoire, tells the story of the American Revolution (and the opening chords of a new country) by following the founding fathers.

In the show, immigrant Alexander Hamilton arrives on New York’s coastline where he meets Aaron Burr and a trio of revolutionary youths in a bar, John Laurens, Marquis de Lafayette, and Hercules Mulligan. As he and his newfound friends jockey for position on the battlefield under the leadership of George Washington, Hamilton meets his wife-to-be Eliza Schuyler, starts a family, and ultimately must contend with political turmoil of his own making. This story, while familiar to those who paid attention in United States history, also flips history on its head – a true revolution – by adding hip hop, R&B, and other influences and through very intentionally diverse casting of all characters.

The opening performance of Hamilton, upon arrival in San Diego on Nov. 9, was in many ways a testament to the talent of swing nation. While shifts to casting are never simple, this particular performance featured five understudies who never missed a beat. With Ellis C. Dawson III stepping in as Aaron Burr, Charlotte Mary Wen stepping in as Angelica Schuyler, Tré Frazier playing George Washington, Alex Larson wearing the mantle of King George, and Christopher Henry Young performing Charles Lee, the cast never once left the audience wanting. Each actor adroitly stepped into their role in a way that flowed seamlessly with the action taking place on stage, making them nearly indistinguishable from the principals. 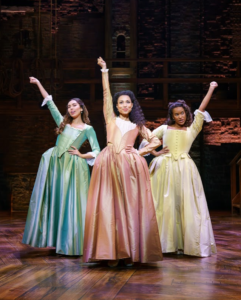 Earning special acclaim was San Diego native and swing Wen, who brought powerhouse vocals to her rendition of Satisfied. Helpless and Satisfied, as a duology, traditionally leave the audience both helpless and satisfied between them. The staging, which is mirrored between the two back-to-back songs, takes the audience through the same period of time through two different perspectives. Wen embodied the boldness of the oldest Schuyler sister and both her soaring belt and her more tender lines were executed skillfully.

Morgan Anita Wood, as middle sister Eliza, brought an unexpected approach to the role; while Eliza is oftentimes played with a reservedness, Wood’s version is bigger, a little more awkward and nerdy, and entirely endearing. Woods, like Wen, has an impressively commanding voice. This, when paired with her characterization of Hamilton’s wife, helped supply what is already a dominant production with a fresh lens. When Eliza has more depth, somehow it makes Alexander Hamilton more real as a human. 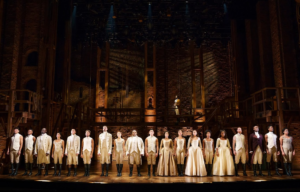 And while these moments were certainly worthy of mention, the truth is that, from beginning to end, the evening’s production was outstanding. I tapped my foot to the beat through “Yorktown” and “The Room Where It Happens,” was captivated by the staging of “Hurricane,” and teared up during “Dear Theodosia” and “It’s Quiet Uptown.” Every actor and dancer held their own individually and the whole, together, was breathtaking. I admired the lighting effects, the choreography and body work, the texture of the brick and wood set, and so many other elements. Director Thomas Kail, alongside his production team, has certainly put together a winner.

While learning about history, in many of our recollections, has not always been fun, Hamilton, on the other hand, always is. Whether audiences have seen the show or are new to the premise, this is a tour to catch before it leaves town on Nov. 20.