While Copley Symphony Hall is undergoing its $125 million makeover, the San Diego Symphony is performing in various other venues around San Diego County. Since the beginning of 2022, the orchestra has been giving concerts in its former home, San Diego Civic Center; on Saturday, Music Director Rafael Payare led his musicians in La Jolla’s Conrad Prebys Performing Arts Center. 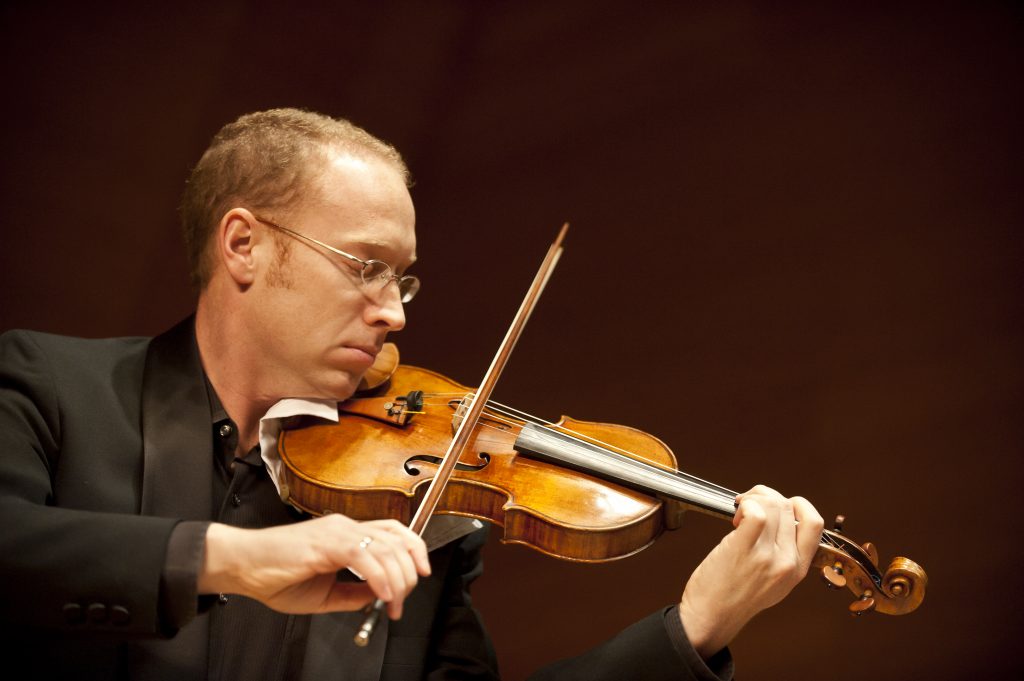 For his program presented in the Baker-Baum Concert Hall, Payare featured three works for strings on the first half and devoted the second half to Mozart’s Serenade No. 10, K. 361, for winds. Of course the 500-seat Baker-Baum hall is not the venue in which to attempt to mount a Mahler Symphony, but it is rewarding to hear ensembles drawn from the Symphony play together in this acoustically flattering hall.

Concertmaster Jeff Thayer gave a fluent, nimble account of Joseph Bologne’s Violin Concerto No. 9 in G Major, Op. 8. Bologne, also known as Chevalier de Saint-Georges, was a slightly older contemporary of W. A. Mozart, and I found this Violin Concerto, composed in the 1770s, as charming as any of the five Violin Concertos the young Mozart wrote in this same decade of the 18th century. While the music of Bologne—whose father was French and who mother was native West Indian—is enjoying a current revival due in part to his mixed-race status, this pleasant, well-constructed concerto never should have been forgotten in the first place.

The 14 string players stood to perform his concerto—a practice well-known in the 18th-century—which provided more muscle for Payare’s ebullient direction of the outer movements of this three-movement work. Thayer’s light, silvery sonority suited the composer’s supple figurations in the outer movements, and in the slow middle movement, Thayer found a richer cantabile line that evoked its slightly elegiac mood.

Payare demonstrated his sense of humor choosing Alfred Schnittke’s “Moz-Art à la Haydn,” a 15-minute concerto-like work from 1977 that features friendly competition between two solo violinists, each backed by their own string ensemble. As the soloists’ themes bounce back and forth, so Schnittke’s style lurches between a passable imitation of Mozart’s polished classical style—the composer actually used some fragments of an incomplete Mozart work— and Schnittke’s own spikey modernist idiom. In the solo roles, Associate Concertmaster Wesley Precourt and Assistant Concertmaster Jisun Yang added tongue-in-cheek dramatic flair to their bravura display. Schnittke’s cute Haydn allusion required the players to sneak off the stage in the same manner that Haydn made his musicians exit in his Farewell Symphony.

The title of British composer Gerard McBurney’s “Haydn’s Hurdy-Gurdy: Four Tunes from Haydn’s Childhood” tells you everything you need to know about this very short piece. If scholars cannot agree that Haydn actually knew these Croatian folk melodies and was influenced by them, McBurney appears unconcerned. He has simply arranged these tunes for a string ensemble to sound like a giant hurdy-gurdy grinding them out. The tunes opened the program on a whimsical note.

It was no secret that Mozart lived above his means, and he was always looking for ways to keep his creditors at bay. Serenades played by Viennese street musicians were all the rage, so Mozart wrote and published serenades and divertimenti by the dozen. In a letter to his father about the Serenade in B-flat major, K. 361, Mozart wrote, “There are pieces I must write that will bring me money right now—not later!”

Called the “Gran partita”—but not by the composer—this incessantly cheerful piece requires 12 wind players and a contrabass, and Saturday’s Symphony musicians gave it all of the vibrant sound and polish it deserves. Perhaps a bit more finesse than it deserves.

From Mozart’s sublime Clarinet Concerto, K. 622, we know that Mozart could compose eloquent music for wind instruments. Serenades, unfortunately, did not require eloquence, so Mozart gave them cartloads of bumptious themes.

This concert was presented by the San Diego Symphony on Saturday, March 5, 2022, in the Conrad Prebys Performing Arts Center, 7600 Fay St., La Jolla, and was repeated twice on March 6 in the same venue.