When I hear someone whining about the excesses of “political correctness,” my eyes roll automatically. I give my readers permission to commence such reactions immediately as I describe San Diego Repertory Theatre’s flamboyant new production of House of Joy in the Lyceum Space. 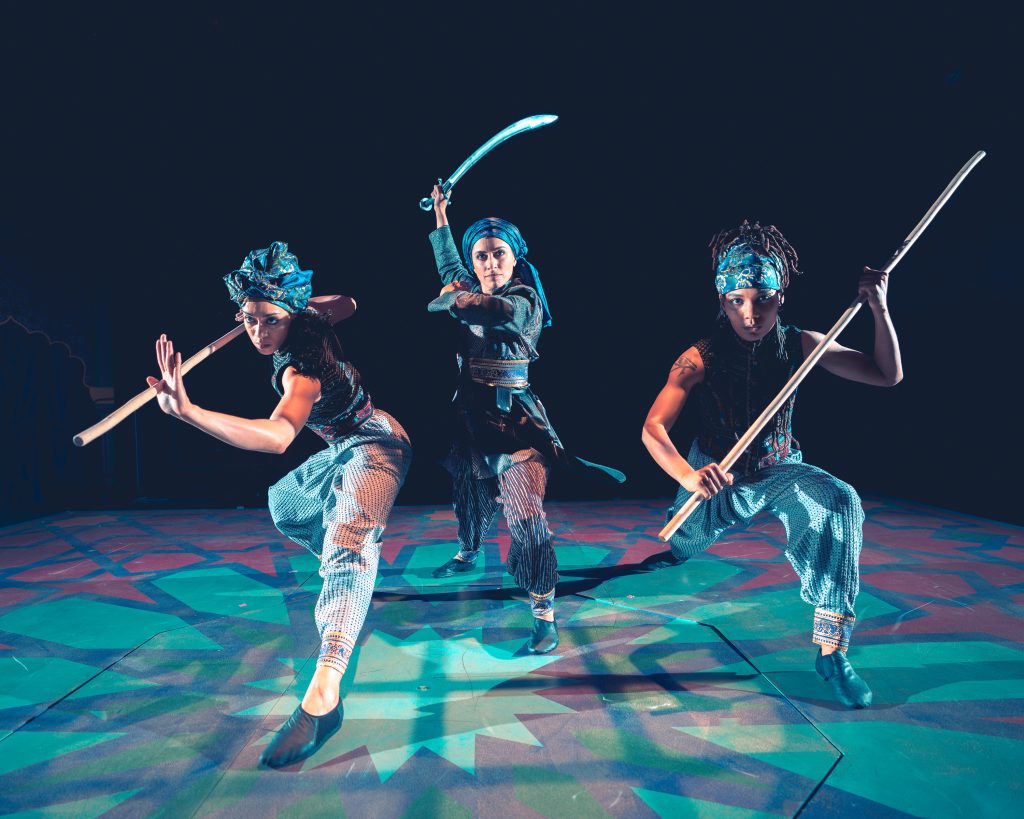 Bristling with stylized combat and the sharp edge of military discipline, Madhuri Shekar’s 2019 play weaves a tale of complex palace intrigue in which Hamida, a member of the harem’s elite female guards, plots the escape of Maryiam, the emperor’s youngest—and most abused—bride. But as Hamida’s strategies take shape, the domineering Princess Noorah takes advantage of rebellion in the countryside fomented by Princely brothers and orchestrates her own palace coup to become Empress.

In her program notes, Shekar has explained that her play is rooted in actual events from Indian history—the Emperor who built the Taj Mahal had two sons who incited a civil war that was negotiated by their sister—but that she has fashioned her own story and set of characters in House of Joy. Members of the audience soon learn the irony of Shekar’s title: although the harem is described as paradise—a house of joy—it is a treacherous place of confinement, controlled by rigid rules, physical abuse, and even murder. And just in case anyone should foolishly entertain the expectation that the play’s harem setting might include a Hugh Heffner inspired coterie of female pulchritude on display, House of Joy includes not a scintilla of tempting flesh. Most of the stage action takes place among the appropriately attired harem guards, and when a male physician is actually ushered into the interior of the harem to attend the ailing Princess Mariyam, she is completely hidden under an opaque tent. The poor doctor is commanded to make a diagnosis without so much as taking her pulse–touching a Princess is forbidden! 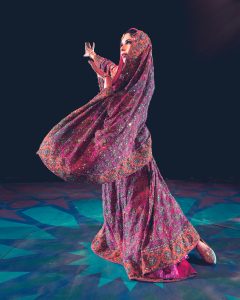 Gittings, a rousing score pulsing with the rhythms and timbres of classical Indian music by Kevin Anthernill, eye-popping fight scenes choreographed by Edgar Landa, and aptly garnished poses and mannerisms of traditional Indian culture supplied by co-director Arpita Mukherjee. It promises a lot, but delivers rather little, and I found it a tedious two hours in spite of the fireworks. If the point of this plot is the rescue of Princess Mariyam, why does she have so little time on stage, and why do we know so little about her? In one scene she is moaning under her tent, and in her other scene she gives a pouty “I’m not taking this any more” speech to Princess Noorah, but we never get to know her to develop any empathy for her. Shekar has simply made her a generic victim,  and Tamara Rodriguez does her best as the beautiful beautiful young woman with a nasty scar on her face, but we should have seen and heard much more of her.

And what of the plot’s villian, the abusive Emperor? Shekar gives him no place on stage–he is simply an offstage angry voice. Another generic character with a major plot function. Filling in for the offstage bad guy, Mondis Vakili struggled to convince us that this imperious Princess who used the majority of her time on stage to boss and belittle everyone of lesser station was going to turn everything around, open doors and let in new ideas, after she offs the Emperor and crowns herself Empress of the kingdom. Yeah, right.

On the other hand, Shekar lavished time on secondary characters. We watched the two low-ranking elite guards Devereau Chumrau as Hamida and TaReikca L.A. as Roshni play games to pass the time on duty and undergo rigorous training under the experienced  leadership of Ulka Simone Mohanty Gulal, who at least projected a reasonable facsimile of a stern drill sergeant. While Hamida does have an important role in Princess Mariyam’s escape, there was little in Shekar’s exposition of Hamida’s persona in the early part of the play that predicted her heroic function at the denouement. TaReikca L.A.’s sassy attitude and street-wise banter easily endeared her to the audience, and a romance that blossomed between her and Karthik Srinivasan’s mild-mannered physician–his name is Thermometer, please don’t ask–enlivened the second act. But it was is no way essential to the dramatic development. 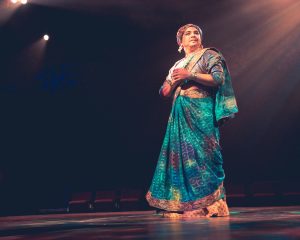 As Salima, the eunuch with scary authority in the court, Shaun Tuazon dominated every scene he took part in with his worldly drag-queen attitude and permanent arch of the eyebrow. Now is the time for some clever writer to create a TV series based on this character, and Tauzon should play it. It could be fabulous!

Artistic Director Sam Woodhouse shared the stage direction with Arpita Mukherjee, and they deserve credit for giving this weak script as much vitality and credibility as it had on opening night. Shekar’s newest play, Dhaba on Devon Avenue, is slated for a premiere later this spring at Chicago’s much lauded Victory Gardens Theatre. I hope that a contemporary setting will provide the opportunity for a tighter and more convincing plot.

San Diego Repertory Theatre opened “House of Joy” by Madhuri Shekar on March 11, 2020, at the Lyceum Theatre in downtown San Diego. The play is slated to run through March 29, 2020.