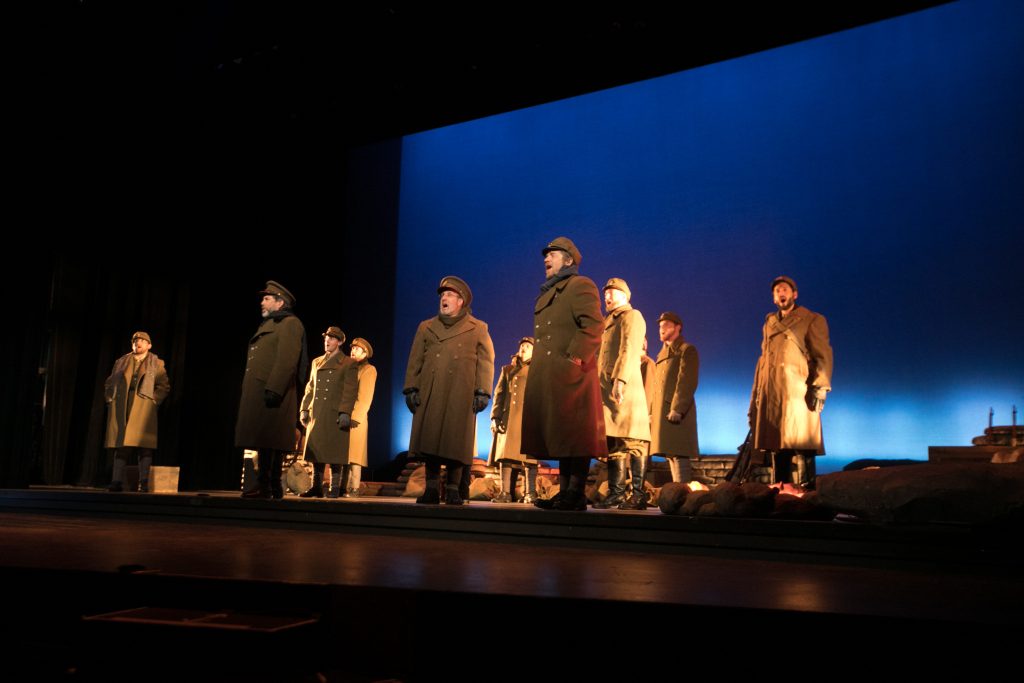 For those who love choral music, under usual circumstances the month of December provides a cornucopia of possibilities to enjoy performances of the art: from Messiah sing-alongs to Advent processions to historically informed oratorios and concerts of Renaissance motets. The current pandemic has largely suspended those options, but San Diego Opera came to the rescue Monday with its drive-in Holiday Sing-Along and All Is Calm presentation at the Del Mar Fairgrounds. 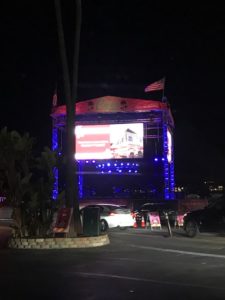 Based on the success of San Diego Opera’s drive-in La bohème staged this October in the Pechanga Arena parking lot, the company presented this second drive-in experience with a screening of its well-received 2018 production of Peter Rothstein’s  choral opera All Is Calm — the Christmas Truce of 1914 preceded by a concert of holiday choral music sung by eight members of the San Diego Opera Chorus directed by Chorus Master Bruce Stasyna. In the center of the Fairgrounds parking lot, the company erected a high tower that featured a stage open on all four sides with huge screens suspended above the stage—one on each side. As with the drive-in La bohème, the sound was broadcast to each car’s radio.

Although the live music was billed as a sing-along, it proved significantly more than that: a program of artful choral arrangements confidently sung by strong voices from the Opera Chorus with exuberant piano accompaniment supplied by Stasyna. Their program opened with Jason Robert Brown’s rousing “Chanukah Suite” that included the Hebrew folk song “Mi Y’Malel” and the stately synagogue hymn “Ma’oz Tzur” that recount the story behind the Jewish eight-day festival that just ended last week.

The singers’ Spanish repertory included the traditional Spanish villancico “Campana sobre campana” and José Feliciano’s popular ballad “Feliz Navidad,” currently celebrating its 50th anniversary, as the NPR commentators have been reminding listeners all week long. In my book, no holiday choral concert is complete without Leontovich’s “Carol of the Bells,” based on the traditional Ukrainian carol, and these singers gave the arrangement a most compelling account.

Mel Tormé’s evergreen “The Christmas Song” and the English carol “We Wish You a Merry Christmas” were the only secular songs on the program. No doubt some members of the audience sang along with “Silent Night” and “Joy to the World,” but I was so starved for good choral singing, that I chose rather to listen to every note the Opera Chorus ensemble uttered.

Watching the film of All Is Calm—the Christmas Truce of 1914 brought home how moving San Diego Opera’s 2018 production at the Balboa Theatre was. My review of the opening-night performance is included here.

Vibrant, Probing Production of ‘All Is Calm–The Christmas Truce of 1914’ at the Balboa