There were no Venezuelan flags stationed on the Civic Theatre stage Saturday for the San Diego Symphony’s performance. But considering the orchestra’s Venezuelan conductor on the podium assisted by Venezuelan trumpet virtuoso Pacho Flores premiering a piece titled Concerto venezolano (Venezuelan Concerto), the flags would have been redundant. 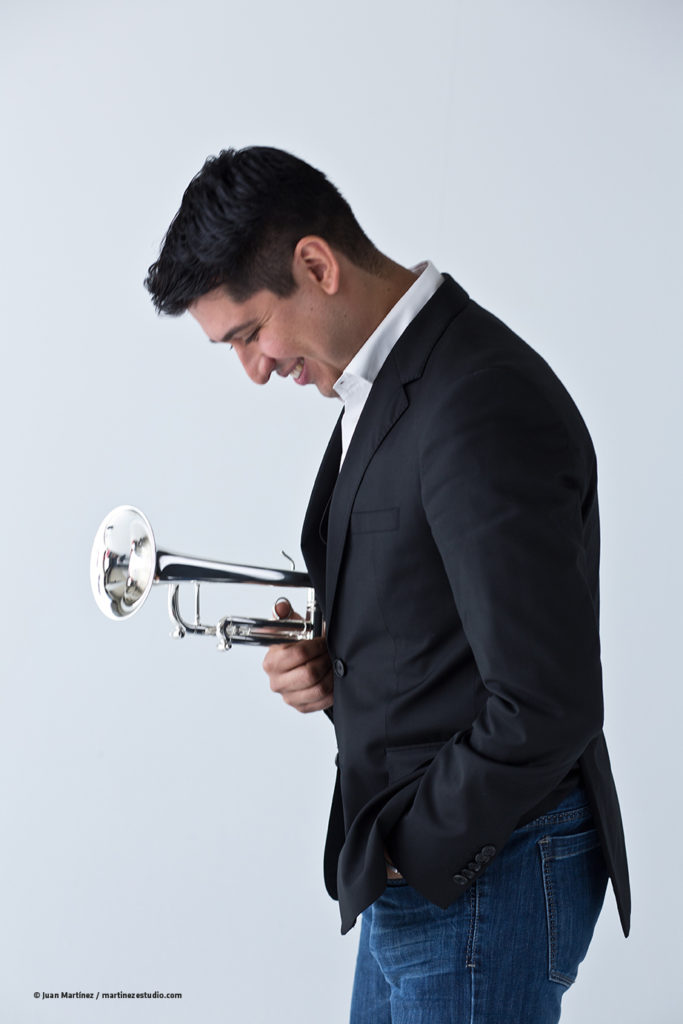 In D’Rivera’s Concerto venezolano, the vibrant street fair ethos of Mardi Gras arrived a few days early. His muscular, single movement concerto included an array of ebullient Latin American dances that kept the percussion section on their toes–kudos to Percussion Principal Gregory Cohen for his stylish work on the congas. The composer pitted the full orchestra against the solo trumpet assisted by solo cuatro, a traditional Venezuelan guitar-like instrument, played with great panache by Hector Molina. The composer provided the trumpet soloist with a cornucopia of brilliant flourishes and bravura passage work that brought to mind the ebullient cornet showpieces written in the early years of the last century.

To execute D’Rivera’s work, Flores used four different instruments, from the piercing, high-pitched piccolo trumpet to the baritonal croon of the flugelhorn. The vigorous strumming of the cuatro added significantly to the work’s Venezuelan flavor in the more boisterous sections of the concerto, but a quiet duet—something like an amorous ballad— between the trumpet and cuatro at the center of the concerto provided welcome contrast, as did the suave, ingratiating tunes assigned to the flugelhorn. Flores brought out the most winning colors of each instrument he played, and his ease with every technical challenge won well deserved adulation from the Civic Theatre audience. Rarely has a new piece of music garnered such abundant audience approval in a San Diego Symphony concert! The composer was brought to the stage at the end of the concerto to receive his portion of the audience’s gratitude, and Flores and Molina played  El Diablo Suelto by Heraclio Fernández as their encore.

Before the D’Rivera concerto, Flores and the orchestra offered a well-paced, stylish account of Johann Neruda’s Trumpet Concerto in E-flat Major, a typical three movement solo concerto written in the early classical style of Josef Haydn’s more familiar Trumpet Concerto. For this work, Flores used a corno da caccia, a coiled brass instrument that looks like a miniature French Horn but plays in the same range of a modern orchestral trumpet. The combination of Flores’ sweet tone on the instrument, his elegant cadenzas, and Payare’s well-chosen tempos made the Neruda concerto a welcome excursion into lesser known repertory.

Payare conducted Tchaikovsky’s grand Symphony No. 4 in F Minor with a level of fervent devotion that was surpassed only by his meticulous attention to the score’s every detail,  and his players responded with masterful accord. Conducting from memory, he adroitly shaped this turbulent symphony, revealing both its commendable structural virtues as well as its more frequently lauded emotional power. The brass sections hurled Tchaikovsky’s muscular fate motive that haunts the symphony’s first and fourth movements with a brittle edge that conveyed its ominous portent. Among the pleasures of the capacious opening movement were beautifully tapered solos by Principal Bassoon Valentin Martchev and compelling, burnished themes from the cello section. The strings delivered the Scherzo’s Pizzicato ostinato magic with pellucid precision, not to mention unfailing ensemble cohesion. The Tchaikovsky Fourth Symphony may be a chestnut, but Payare and the orchestra delivered it with the fresh, eager enthusiasm they lavished on D’Rivera’s premiere.

This concert by the San Diego Symphony under the baton of Music Director Rafael Payare was played on Saturday, February 26, 2022, at the San Diego Civic Theatre.