With 4’33”,  John Cage’s now iconic work from 1952, performance art and classical music were wed in a sacred union. Avant gardists soon added other media to evolving notions of performance, and among the more bizarre offspring from this union was danger music as practiced by Nam June Paik, Yamantaka Eye, and other composers in the Fluxus circle.

The personal computer has opened new vistas–most of them more audience embracing than the daunting danger music variety–for composer-performers, as Florent Ghys ably demonstrated in his solo recital for Fresh Sound at Bread & Salt in Barrio Logan Monday (Sept. 28). With a computer tablet strapped to his double bass and large screen to his right, the Flemish musician recreated his own audio and visual world for a highly attentive audience. 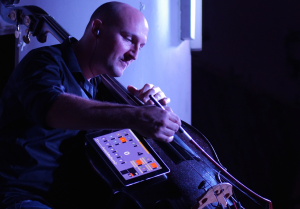 An accomplished bassist, Ghys is more inventor than composer, as Arnold Schoenberg said of his student John Cage. In a couple of pieces, Ghys played the same piece with himself recorded and displayed on the video screen. One of these pieces was appropriately titled “Teamwork.”

His style relies on basic minimalist formulas that progress not by development, but by layering new digitally processed lines and increasing the work’s density and dynamic level. After several consecutive pieces, I felt this approached torture by ostinato.

I thought Ghys’ most clever offerings were accompaniment—reactions to videos. “Swing Out from Open Position” took several period dance demonstration films to which he added a jazzy, rhythmically asymmetrical track as clever counterpoint. His “Blazer and Tie” took several clips of televised weather reports from around the world to which he doubled the rise and fall of the forecaster’s voice on the double bass. His title, of course, refers to the standard attire of such television functionaries.