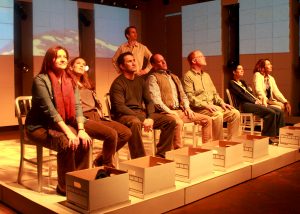 The cast
Photos by Casey Long

Before his theatre directing career took off Moisés Kaufman made a splash by creating “documentary theatre” with members of the Tectonic Theatre Project, a group he co-founded. The Tectonic troupe was interested in how drama was structured, and this interest led the group to develop its own texts, based on original source material.  The sparkling example of this method was the play, Gross Indecency: The Three Trials of Oscar Wilde, a fast-moving examination of the great playwright’s downfall because he was charged with being gay, a crime at the time.  The play featured a group of “witnesses” who stayed on stage throughout and moved between roles while quoting from trial transcripts and letters.

Following the highly-publicized death of gay University of Wyoming student Matthew Shepard, who was robbed, beaten, and then tied to a fence in a remote area, the members of Tectonic decided to develop a play based on interviews with the people of Laramie, where the crime occurred. The result was The Laramie Project, where company members played both themselves and the people they interviewed.

Ten years later, the group returned to Laramie and repeated the project in order to create an epilogue. The Laramie Project: Ten Years Later resulted.

While The Laramie Project has been widely produced (though, not without controversy, especially when school groups stage it) the epilogue has received much less attention.  So, it is an “event” that Orange County’s Chance Theater decided to stage both in repertory, under the direction of its artistic director, Oanh Nguyen.

Mr. Nguyen has developed a loyal following among both artists and audiences by creating productions where the ensemble is the star, making him a natural for a project such as this one.  To a large degree, he succeeds magnificently.

Staged on Fred Kinney’s deceptively simple set the performers move platforms and chairs around to create various scenes. But, the key scenic element is the drawers of file boxes that are accessed on either side.  Mr. Nguyen has his cast take out these file boxes in ritual manner at the beginning of each play, and while the boxes turn out to contain costume pieces, symbolically they contain the basis for the play’s text – the interview transcripts and journal entries that were accumulated over time.  The burden of these boxes is not only physical, it is, as one interview subject said, “…to get it right.” 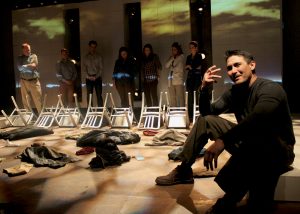 Getting it right requires molding the text into dramatic form and then presenting it in compelling fashion. In The Laramie Project, dramatic form is shaped by time. The story is told in chronological order, with Act 1 covering the interviewers’ arrival in Laramie and their attempts to piece together through interviews how Matthew Shepard met Aaron McKinney and Russell Henderson at a bar, accepted a ride home, and was later found near death by a passing bicyclist. Act 2 covers the time that Matthew Shepard spent in the hospital before he died, and Act 3 covers his memorial service and its aftermath.

The Laramie Project: Ten Years Later is organized topically, which puts it at a disadvantage, dramatically, when compared to its progenitor. Its topics include how a broadcast report on the ABC News program, 20/20, provided an alternate version of the events covered in The Laramie Project, a version that many Laramie residents chose to believe; how efforts to advance the rights and well-being of gay and lesbian people in Wyoming had met with mixed success; and the struggles the interviewers experienced in their attempts to interview Mr. McKinney and Mr. Henderson in prison, as well as the results of those interviews. Because these events are historical but make no pretense to be “history,” the political agenda of the epilogue is more transparent than The Laramie Project, which can be read as a story of oppression where the victim dies but the bad guys get their just desserts.

So, being true to the text of The Laramie Project involves telling the story as it unfolded, while being true to the text of The Laramie Project: Ten Years Later involves telling the story but somewhat less dispassionately and more politically.  Here, Mr. Nguyen and his excellent cast (Jocelyn A. Brown, Robert Foran, David McCormick, James McHale, Erika C. Miller, Karen O’Hanlon, Brandon Sean Pearson, and Karen Webster) falter a little. The Laramie Project starts with a foreboding that slows down the line readings and promises the audience an even longer performance than the two hours fifty minutes noted in the program.  Some of the problem occurs because Mr. Nguyen’s normally crisp and disciplined blocking is complicated and forces a slowing of the line readings.

These problems eventually straighten themselves out, only to recur at the beginning of The Laramie Project: Ten Years Later, where a different kind of writing (longer speeches, a less frenetic pace, and a need to surface the political agenda) requires another shift in style.  Again, the cast and direction adapt, but it takes a little while to do so.

Still, these problems are minor ones, and while the two parts constitute a “long sit” on a weekend afternoon and evening (you may also see them one at a time on weeknights) the end result is both satisfying and devastating.[php snippet=1]

The company has been well chosen for their roles and dressed (by Erika C. Miller) in costumes that allow them distinctive personalities and audience members an opportunity to sort out who is who at any given moment. In general, men play men and women play women and the characters carry through from The Laramie Project to Ten Years Later, but in the latter play there is more gender switching and one role (the Catholic priest) does change hands. By then, though, the conventions are instilled sufficiently that the audience has become invested in both the process and the text.

Attitudes toward lesbians and gay men have changed substantially since Matthew Shepard’s death, but bullying and outright violence still result in both murder and suicide. And, as Ten Years Later amply illustrates, people will believe what they want to believe. So, documenting these events and how ordinary people reacted to them is both dramatically satisfying and societally necessary.

There are quite a few restaurants within walking distance of the theatre for a dinner break, if you want to see both shows on the same day. Ticket prices are $27 – $35 and are available by calling the box office or visiting the company’s website (see information below). There is ample free parking near the theatre entrance. The theater suggests that the performances are appropriate for ages 13 and older.