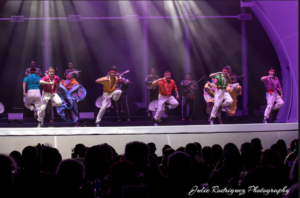 An ofrenda (offering) is an altar made to welcome departed family members on Day of the Dead. The welcome from “Ofrenda” was so spectacular, surely the nearly 3,000 living souls at the Rady Shell on Sunday were surrounded by legions of spirits, drawn to the heart-melting singing, thrilling percussive footwork, and parade of vivid costumes.

This Day of the Dead show, seen here in its world premiere, features a cast of 40—30 dancers and 10 musicians—from two superb groups, Ballet Folklórico de Los Angeles and Mariachi Garibaldi de Jaime Cuéllar. Ballet Folklorico, founded in 2011, performs throughout the U.S.; founder Kareli Montoya choreographed shows for Disney Studios related to the film “Coco.” Mariachi Garibaldi was founded by Jaime Cuéllar in 1994 and is now led by his son, Jimmy, a composer, master of multiple instruments, and winner of three Grammy Awards. 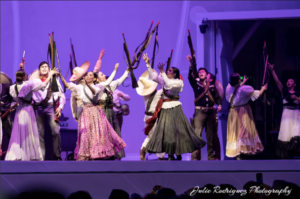 A banquet of Mexican culture, “Ofrenda” opens with a high-energy celebration of the revolution. The dancers enter in military-style formation, carrying rifles—which they toss to one another in Montoya’s playful choreography—to the mariachi classic “Adios al Solado” (The Soldier’s Farewell). The rifles then become props as the dancers line up and create a locomotive.

The generous program of 13 numbers, several of them tributes to departed legends such as Selena and Juan Gabriel, displays Mariachi Garibaldi’s powerful voices, in particular the rich operatic tenor of Gustavo Hernandez. The troupe’s multi-instrumentalists switch with seeming effortlessness from fever-paced violins to mellow horns to various forms of guitars.

Many of the dances showcase the styles of various regions of Mexico, like the foot-stomping zapateado of Veracruz, for which the Rady stage turns out to have terrific acoustics. Deeply researched, the dances reflect Montoya’s training with the Ballet Folklórico de la Universidad de Colima; for this production, she also brought in a folklórico scholar, Ignacio Sánchez Verduzco, as a guest choreographer. 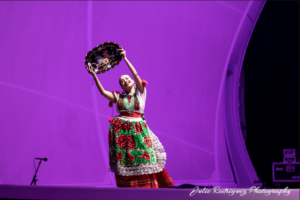 In dances from Michoacán, the women hold ceramic dishes overhead or against one hip; and there’s a delightful comic bit where a group of stooped, masked “viejos” (old men) cavort with high-stepping kicks over their canes. A number from Nayarit lets the men sport their brightest plumage, shirts in tropical shades of turquoise, chartreuse, hot pink, and orange. For Flor de Piña from Oaxaca, where the women carry pineapples, Montoya used classic choreography created by Paulina Solis 60 years ago.

It’s no small feat to deploy 30 dancers across a stage, especially when the women often wear voluminous skirts, but Ballet Folklórico finesses it, with the dancers interweaving gracefully. There’s a pleasing mix of line dances, partnering, an inner and outer circle forming a daisy chain, and moments when one or two performers take center-stage. And the costumes! The dancers come out in fresh duds for every number—no wonder the program even lists a costume manager.

Of course, no Day of the Dead performance would be complete without an imposing Death figure (a woman in black lace), death masks, and songs from “Coco.” But, even given Montoya’s Disney connections, “It’s a Small World?” Still, that’s a tiny quibble with a production so polished it looks ready for a world tour.