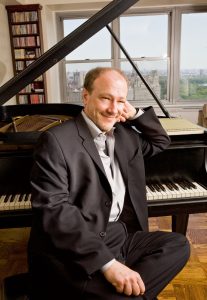 In the beloved Gershwin “Rhapsody,” he made even the most familiar passages sound fresh and winning, as if he were improvising them on the spot. And in Ravel’s infrequently played Concerto, Hamelin’s left hand swiftly surfed the keyboard’s compass, commanding resonant, shimmering waves of sound or painting intimate frescoes without breaking so much as a bead of sweat or suggesting the heroic effort required to produce such technical gymnastics—while his right hand rested blithely on the edge of the piano bench.

Guest conductor Karina Canellakis, the Dallas Symphony’s Assistant Conductor, served as Hamelin’s amiable partner in crime, judiciously attuning the orchestra to his meticulous inflections and tempos. A bit of a whirlwind on the podium, Canelaikis’ long arms arced wildly over her charges, pressing them forward to realize her heady visions.

She began with a transcription of Claude Debussy’s solo piano work “L’isle joyeuse,” fitted with gossamer string textures from which burnished oboe and muted trumpet solos gently emerged. Not surprisingly, this piece called to mind the composer’s signature Impressionist tone poem “La mer,” which he was completing when he composed “l’isle joyeuse.

Ravel’s Concerto for the Left Hand, a commission from Paul Wittgenstein, an Austrian concert pianist who lost his right hand in World War I, strikes me as one of his more rhapsodic and Impressionist pieces, unlike his cleanly neoclassical Piano Concerto in G Major. Canellakis coaxed decadent, brassy, roiling textures from the orchestra, leaving the composer’s more introspective moments to Hamelin’s capable hand and keen interpretive insight. 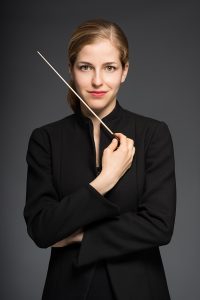 What classical piece captured the extroverted swagger of the 1920s more than Gershwin’s “Rhapsoday in Blue”? Hamelin and Canellakis provided all of the work’s jaunty, capricious strut without reducing it to that blowsy flapper trotted out for hastily prepared pops concerts. Canellakis fused a sleek, tightly blended studio orchestra sound from the symphony that could not have been more at home in Copley Symphony Hall, which began its service as a 1920s movie palace, and Hamelin lavished on Gershwin all of the incisive interpretive prowess he displayed in the Ravel.

Keeping up the program’s piano theme, Canellakis concluded with five “Études tableaux” by Sergei Rachmaninoff, orchestrated by Ottorino Respighi. If they did not bring the concert to a mighty climax, these exquisite miniatures functioned as an elegant cool-down to an evening of aerobic concerto performances.