Bernard Slade’s 1975 romantic comedy, Same Time Next Year, was a hit on Broadway, running for four years and made into a film as well. A two-hander about twenty-four years of one-weekend infidelity, it charmed audiences with its insights into each character’s happy marriage, and the degree of honesty and care the couple exhibited for each other. Having tackled revivals of several of Neil Simon’s plays, North Coast Repertory Theatre credibly mounts a production filmed in its theatre that will both satisfy and remind you of what you’re missing. 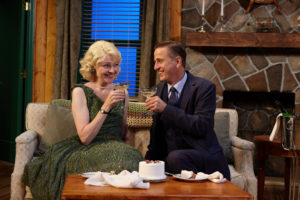 Doris and George first meet for an affair in 1951, at a resort cottage in Northern California. George is an accountant from the East Coast who has a client in the area. Doris is a housewife who is on a Catholic retreat being held nearby. Besides having sex (which is never shown), the couple connect over sharing information about their spouses and families. The affair becomes an annual one, and the play checks in with the couple over the course of six scenes, occurring every five or so years through 1974.

Mr. Slade is interested in how each of his two lovebirds adapts to changing times through the Fifties, Sixties and Seventies. George picks up on the Human Potential Movement and spouts some of its lingo as the Fifties turn into the Sixties. Doris makes the most dramatic changes, though. A high school dropout when they first meet, she finishes high school, then college, and then embarks on a successful career.

But, the conversations they have with each other, different from what married couples who are together day in and out might have, that endears Doris and George to each other and to audiences. In particular, they develop a habit of sharing one positive and one negative story about each of their spouses, and those stories provide cumulative insight, probably because of their mostly mundane qualities. 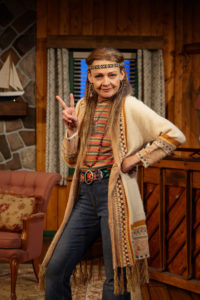 A real-life married couple, Katie MacNichol and Bruce Turk, are playing Doris and George. They each do a fine job of putting the characters on stage, and under David Ellenstein’s steady direction, the play’s forays into 1960s “all hang out” culture and 1970s women’s liberation come off as part of the play’s time, rather than an opportunity for parody (though, one of Elisa Benzoni’s costumes, pictured, comes close).

The production is easily tagged as being filmed in North Coast Rep’s theatre space. Hearty congratulations are due to Marty Burnett for his 200th scenic design for this company. That said, one can always recognize Marty’s designs. This great-looking one actually makes me nostalgic for live performances at this venue. Another North Coast stalwart, Aaron Rumley, was in charge of the filming, which looks professional and is quite satisfying in the variety of shots designed to hold audience interest, while still capturing the acting charms of Ms MacNichol and Mr. Turk. No lighting designer was credited, but since lighting is important to the look of the filmed version, I imagine that Mr. Rumley had a hand in it. Phillip Korth found a variety of props for a 1950s get-away cabin, including new looking period luggage. Peter Herman did his usual masterful job of outfitting cast members with wigs.

North Coast has jumped in with both feet to putting its season on film under contracts with SAG-AFTRA, as opposed to Actors’ Equity. I presume that the SAG-AFTRA contract keeps costs from becoming prohibitive and allows the company to charge $35 for a “ticket,” which provides a link for a screening to your household.  They do give you an opportunity to make a donation on top of the ticket price. This is a deal; I hope you’ll be generous.

As I’ve noted with the company’s Neil Simon revivals, comedies of this period provided a chance for including adult humor that wouldn’t have passed the “standards” staff at the television networks. The popularization of cable television changed all that. Same Time Next Year’s premise titillates mildly, but its relational dynamics ring true enough for contemporary sensibilities.

Streams through November 15. The six scenes are performed without intermission, and the run time is approximately two hours. Visit North Coast Rep’s website to purchase tickets.