Patrons who perused the Mainly Mozart Festival Orchestra’s final concert program ahead of time knew they were in for a certain amount of humor Saturday (June 24) at the Balboa Theatre. Haydn’s notorious “Farewell” Symphony—also known as his Symphony No. 45 in F-sharp Minor—requires the orchestra players to depart one at a time or in pairs throughout the last movement until only two violinists are left to play the final notes of the work. 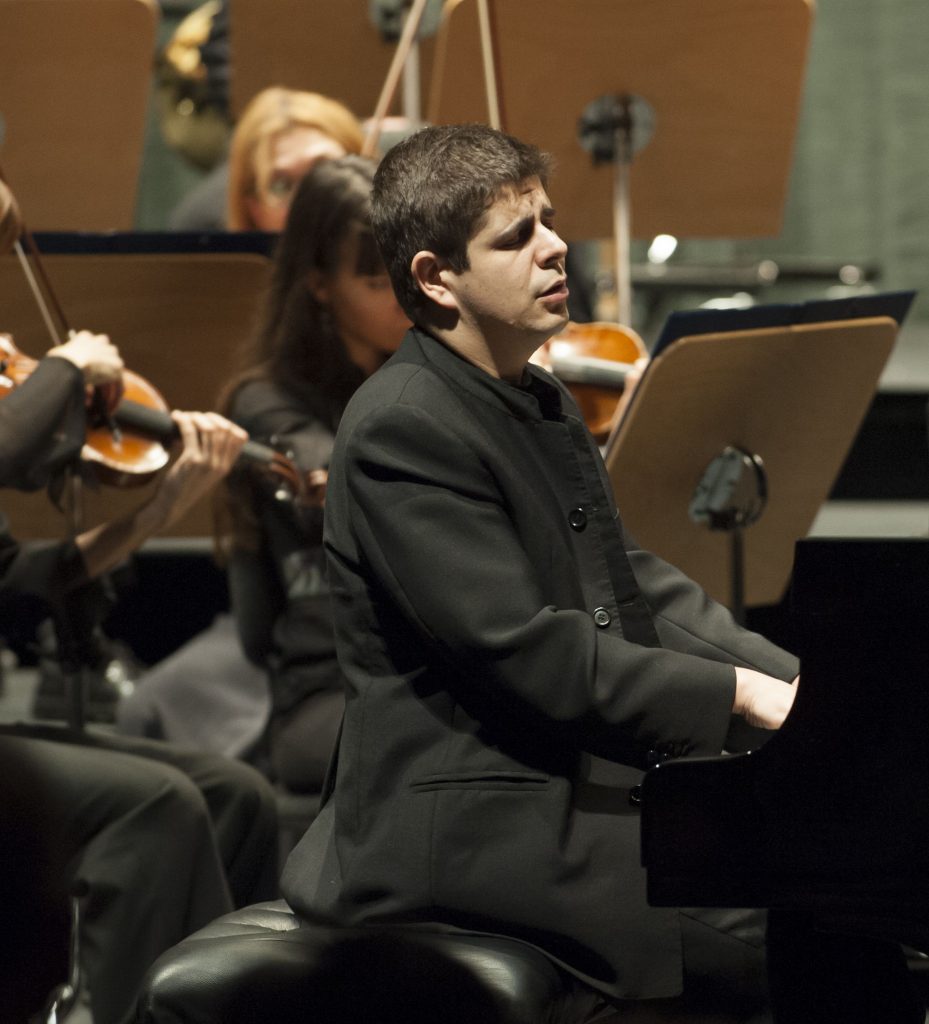 Haydn orchestrated—in both senses of that word—this musical protest on behalf of his musicians because their patron, Prince Esterházy, was keeping his musical establishment cooped up in the remote family castle far from the musicians’ families in Eisenstadt. This 18th-century prank, perhaps an ancestor of 20th-century performance art, proved mightily successful, at least according to Haydn’s early biographers, because the self-absorbed prince got the message and released his overworked musicians the day after they performed this symphony for their noble patron.

In modern performances, during the last movement of Symphony No. 45, orchestra members usually simply slip away from their music stands and quietly leave the stage. The Mainly Mozart Orchestra players, however, did not go quietly into the darkened backstage night. The first two dropouts brusquely walked across the front of the stage, sat down at edge of the stage and popped open cans of beer, which they eagerly began to quaff. Another pair of musicians climbed onto the podium and took selfies with Music Director Michael Francis while he continued to conduct. A contrabass player lugged his instrument across the front of the stage in one hand, dragging his stool behind him with the other. At one point late in the movement, Principal Bassist Jeffrey Beecher and maestro Francis actually momentarily exchanged places.

The program’s other surprise appeared in the guise of Alfred Schnittke’s 1977 performance art opus “Moz-Art à la Haydn” for strings, which began in a completely darkened house. Discrete scratching sounds and muffled instrumental murmurs eventually erupted in a startling fortissimo shriek. When the lights came on, we saw two clusters of violins and violas standing on either side of the stage with two cellos and a contrabass placed at the rear of the stage.

Having constructed the score with some actual Mozart themes from an incomplete work titled “Pantomime Music,” K. 446, Schnittke put these musical ideas, some neoclassical extrapolations, and a healthy dose of Expressionist angst into his compositional Cuisinart, and voilà. In the final decades of the last century, musicologists called this approach Polystlyism. By the time the Russian-German composer died in 1998, the expiration date on this musical fashion had already expired, but it was diverting to bring back these quirky sonic tableaux in a Mozart festival.

And if you are wondering about the work’s Haydn connection, after a bit of perfunctory choreography by the two ensembles of upper strings, the musicians marched off the stage while playing, à la Haydn’s “Farewell” Symphony. This left the two solo violinists, Jun Iwasaki and Zachary DePue, alone on stage executing a strange duet. I can only laud their confidence and bravery.

Of all the early Mozart piano concertos, Concerto No. 9 in E-flat Major, K. 271, (“Jeunehomme”) stands out as the most profound and complex. Completed as the composer turned all of 21, it rivals his most mature concertos. Spanish pianist Javier Perianes employed his exquisite, diaphanous touch to reveal the work’s abundant virtues, especially Mozart’s mesmerizing swarms of ornamentation and thematic extension. He maintained its glittering proportion, pulling glowing sounds from the concert grand without unleashing any of its thunder, unlike too many concert pianists of earlier generations whose Mozart fortes and Brahms fortes were almost indistinguishable. Perianes proved ever urgent, but never rushed.

Both soloist and conductor treated the minor mode Andantino as an emotionally effulgent arioso from a Baroque opera, replete with rapturous chiaroscuro—haunting at one moment and frighteningly turbulent the next. Perianes’ undaunted fluency and dramatic flare gave the Rondo all the thrills of a chase scene from a Hollywood blockbuster, but with the spiritual payoff of a visit from the Dalai Lama.

For his encore, Perianes offered a blistering account of Manuel De Falla’s “Ritual Fire Dance,” originally an orchestral work, but one which the composer later arranged as a brilliant piano solo. De Falla is one of Perianes’ specialties, and the Balboa Theatre audience was thrilled by his performance of this iconic Spanish piece.

Adding to an already substantial program, Francis included Claude Debussy’s “Prélude à ‘L’après-midi d’une faune’” to Saturday’s offerings. The delicious pastel harmonies, Principal Flute Jeffrey Khaner’s shimmering solo themes, and the magical presence two harps came down on the side of variety as opposed to continuity. But who would be so churlish to turn down a portion of delectable Debussy?

This concert was presented by the Mainly Mozart Festival on Saturday, June 24, 2017, in the Balboa Theatre, 868 Fourth Avenue in Downtown San Diego. The 2017 festival concluded on Sunday, June 25, 2017, with two chamber concerts in Carlsbad and Rancho Santa Fe.