The headline is easy: “Live Theatre Returns!” The last SanDiegoStory review of a live theatre opening was published on March 12, 2020. The production was the San Diego Repertory Theatre’s House of Joy.

Today, we publish the first review of a live theatre production since that time. The production is Moonlight Stage’s Once on This Island.

Oh, yes, there have been some other live, jury-rigged offerings. This one is the first in a major venue with a permanent stage and seating. I hope its appearance proves to be a harbinger of live theatre’s return to San Diego County. 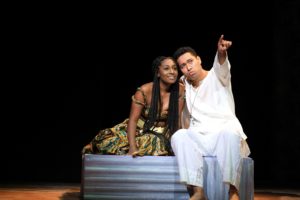 The show, Once on this Island, wasn’t originally on the schedule. In fact, there was supposed to be a return of the season scheduled for Summer 2020. Much of those plans have now been announced for Summer 2022. I’m grateful for what we have: in addition to Once, Beauty and the Beast is next, followed by A Chorus Line and On Your Feet: The Story of Emilio & Gloria Estefan. Since the season got a late start, it will continue into early October.

To the show at hand: it’s not a fancy offering, though the projections by Blake McCarty are impressive. What’s terrific about it is that the occasion gives a bunch of performers with excellent voices a chance to appear on stage together – and for audiences to enjoy an evening watching them and listening to them. 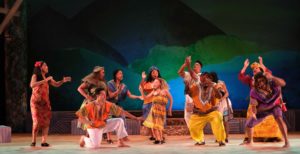 The story is based quite loosely on the Hans Christian Andersen version of “The Little Mermaid.” In a way, the story provides a metaphor for the reopening of the Moonlight Amphitheatre, but it would be spoiling the experience to describe exactly how. Let’s put it this way: if you hear singing in the trees (and you might), you could ascribe intent to the theatre gods to keep Moonlight alive after its substantial sacrifices during the pandemic.

Lynn Aherns and Stephen Flaherty have not done their best work with this show (for their best work, see Ragtime, which Moonlight will present next summer). Their story telling is mildly adept, and their music and lyrics are pleasant.

The show is built for good singers to put across the songs, and Moonlight’s cast fills the bill nicely. Vocal standouts are Ala Tiatia-Garaud, whose sweet tenor makes his character, Daniel a worthy hero; Edred Utomi, whose sonorous bass and menacing stage presence make Papa Ge a worthy villain; and Brooke Henderson, whose musical theatre “belt” and ability to move well warrant the spotlight she receives as Ti Moune, the heroine. It’s interesting that all of the Equity performers (Nathan Andrew Riley, Anise Ritchie, and Mr. Utomi) were in national tours before the pandemic, and Mr. Utomi was playing Alexander Hamilton in that company’s first National Tour. If you go to Moonlight hoping to see stars of tomorrow, here’s one to notice.

It’s a pleasant night out. Paul David Bryant’s direction and choreography work well for what must have been limited preparation time. Stephen Gifford’s scenic design and Jennifer Edwards’ lighting design fit nicely with the projections, which are clearly the star. Sound design is sometimes a problem at Moonlight, but Jim Zadai’s design mostly balanced vocal diction with the accompaniment of Lyndon Pugeda’s pit band on opening night. Costumes and props are typically rented at Moonlight, and Felicia Broschart and Gabrielle Tillinghast handled those duties effectively.

Performs at 8pm, Wednesday through Sunday until July 3. No performance on July 4. On opening night, masks were optional for fully vaccinated individuals, on an honor system. Orchestra area seating was not socially distanced, some audience members wore masks, most didn’t, on opening night. Masks were also required for riding the shuttle bus from the parking area to the theatre entrance. For socially distanced seating, reserve a lawn space. Food and drink are available or bring your own – no outside liquor, however. Company members not mentioned in the review are Kevin “Blax” Burroughs, Leo Ebanks, Patricia Jewel, Jodi Marks, Jocline Mixson , and Maya Washington.