The Belle of Amherst first debuted in 1976, and the role of poet Emily Dickinson became a signature one for Julie Harris, who originated it, recorded the television version, and toured it throughout the country. It’s a tricky role to play, as Ms. Dickinson encountered many setbacks in her life – including a stern father – and kept writing even though her poetry would not be fully recognized until after her death. It takes an experienced performer to hold the stage for the 100-minute run time, maintain audience interest, and still capture the profound sadness that Ms. Dickinson experienced during her life. Cynthia Gerber is such a performer. 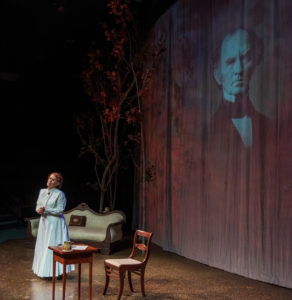 Lamb’s Players Theatre Producing Artistic Director Robert Smyth must have realized that the play was a good fit for reopening indoors (the company had already called attention to itself via a gospel cabaret performed multiple times outdoors). The Lamb’s audience enjoys classic American plays, and William Lucas wrote one that qualifies. Employing quotations from Ms. Dickinson’s poems, as well as from her letters and diaries, there is still plenty of opportunity for Ms. Dickinson’s character to chat with the audience. The play opens and closes with Ms. Dickinson sharing a recipe with an audience member, for example. Much of the quoted material will be unfamiliar to all but Dickinson scholars, but there are several famous lines from the poems that will jump out, probably eliciting an “ah-ha” reaction in the process.

Lamb’s also operates on as close to a “company” model as San Diego gets: the same people pop up in a variety of roles onstage, and a number of them also work there as “team members” when not performing. Mostly, this model seems to work well for Lamb’s. It also works well for the team members, and for audiences. 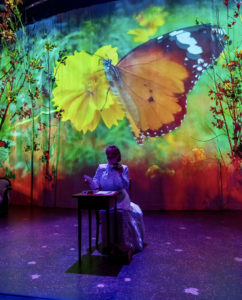 Ms. Gerber and one of Michael McKeon’s projections

In The Belle of Amherst, it is comforting to see familiar names: Mike Buckley did the scenic and lighting design, Jemima Dutra designed the costumes, Rachel Hengst designed the many properties, and Deborah Gilmour Smyth designed the sound, though Patrick Duffy designed the audio clips that ran at key moments. The lion’s share of the staging effect came in the form of the many projections, designed by Michael McKeon, that enhanced the spare stage, backed by a curtain that served to make the playing space more intimate.

Mr. Smyth wrote in the program that Ms. Gerber and he were having conversations for around twenty years about this play. I’m glad that those conversations came to fruition as a way of joyfully reopening the Coronado facility. Ms. Gerber’s performance reflects that joy, despite the play’s essential melancholy nature. I get that choice, though I do wish that more of the sadness had come through.

It probably doesn’t matter what I think, though. The audience for the performance I saw was attentive despite the long sit – a sign that the production was working. I agree with the sign – it not only works but it serves to welcome Lamb’s back.

Performs through November 14, 2021: Wednesdays, Thursdays and Fridays at 7pm, and Saturdays at 8pm, with matinee performances Wednesdays and Sundays at 2pm and Saturdays at 4pm. The theatre is located in downtown Coronado: ask about recommendations for parking when purchasing tickets. Also, proof of COVID vaccination is required to enter the building. In addition to the creative team credited in the review, Maria Mangiavellano serves as Stage Manager.