A Gentleman’s Guide to Love and Murder is a merry new musical containing bits borrowed from all the right places. The Old Globe is presenting it with a charming cast and infectious ingenuity.

W. S. Gilbert, Noel Coward and Oscar Wilde hover over the Edwardian enterprise, with Charles Dickens, Henry Fielding, Voltaire and John Gay nearby. But that large beast munching the hors d’oeuvres in the drawing room is the 1949 British film comedy  Kind Hearts and Coronets, in which Alec Guinness played eight members of an aristocratic English family who die in mysterious fashion to the benefit of the penniless opportunist who’s ninth in line for the earldom.

Though both that film and this musical claim the same source – Israel Rank, a satirical 1907 novel by Ben Horniman, friend of Wilde – there is no official mention at the Globe of the picture version, generally considered a minor masterpiece.

(It’s probably a case of cautious lawyers. For example, the family name in the book is “Gascoyne,” in the film it’s “D’Ascoyne” and for the Globe, it becomes “D’Ysquith.” Hmmm. Reminds me of a lively interview I had years ago with Harvey Fierstein, who adapted a French play titled La Cage aux Folles for Broadway. Any influences from the smash-hit film of the same name? I asked. “I never,” said he, face going blank, “saw it.” Hi there, lawyers.)

The difference in the three titles is instructive. The hero of Israel Rank is the son of a strayed blueblood mother and the Jewish nobody she married for love, thus giving the story an extra layer of Edwardian outsider. Kind Hearts and Coronets is a line lifted from a Tennyson poem and slyly suborned for dark comedy. A Gentleman’s Guide to Love and Murder clunks a bit, suggesting an uneasy effort to lasso a wider audience. 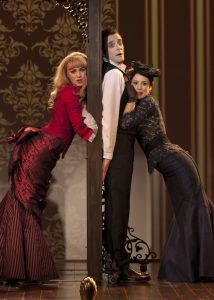 In truth, love hasn’t much to do with this story, which is satirical irony stalking class snobbery. The excellent authors of AGGTLAM – words by Robert L. Freedman and music by Steven Lutvak – obviously know this, since their show gives ample evidence of long, hard and careful work. If anything, it’s too polished. Certain elegant elements are admirable in themselves but don’t push the piece along, often a sign that the creators hate to give up the product of so much effort merely because it no longer works.

I’m thinking here of midway through Act II as the denouement approaches. We’ve watched seven D’Ysquiths meet their various ends, with more or less help from our upwardly-mobile hero, and we have seen him pocket the poison for the earl himself as he arrives at the castle for dinner. Surely a time for precise plotting and smooth skating to the climax? Instead, there is slapstick dinner schtick, a raucous domestic argument, a reappearance of a long-lost character, subplots of female scheming and a song to keep going. What actually occurs is lost in the confusion and hard to comprehend even when it’s later explained.

Such is the drive of the play and its staging, however, that this plot confusion is not as burdensome as it would be in a classic mystery story. The guy may actually get away with it and that actually may, thanks to the careful balance of the play’s morality, be okay. Besides, hints the ending, the plots never end.

Freedman’s language is comfortable and fun, not so much the arch stalking of satirical targets as just giving a jolly verbal framework where the actors can hang his complex variations of stereotypes. And he has a way with song lyrics that make happy both singers and listeners.

Lutvak’s music is either brightly serviceable or delightfully surprising. “A Warning to the Audience,” no matter how ironic, probably isn’t the ideal opening song, more of an apology for making light of murder. And songs like “You’re a D’Ysquith” and “The Last One You’d Expect” sound a bit like requirements checked off a “to-do” list. But “Better With a Man” is a dandy stampede of innuendo, “I Don’t Understand the Poor” is a superior patter song and “Sibella” is really nice, complex and unexpected.

With a single exception, the victims are all cartoons, played a la Guinness by Jefferson May, a protean imp with banjo eyes and no fear. Some of his one-trick ponies are more catchy than others – I liked the doughty dame searching the globe for a cause fancier than “Schools for the Ragged” and I loved the prissy beekeeper – but May served them all according to their desserts.

Virtuoso versatility aside, Ken Barnett has the better role, as the hungry climber, by turns humble, outraged, greedy, amazed and very nimble with the self-justification. Barnett smoothly takes advantage of these riches, ascribing a picaresque arc from feckless loser to suave rogue with an assortment of charming shrugs.

But get a load of these two principal women’s roles: the flighty adventuress who rejects our hero for a better wallet but glides right back as a demanding mistress when she sees his success and the proper maiden who’s been saving herself for just such a blast of invigoration from outside the gentry.

Lisa O’Hare and Chilina Kennedy are a dynamic operetta duo, two lissome singing actresses who compliment each other so well I would attack the entire Gilbert and Sullivan canon with them leading the ladies’ department. As the saucy blonde, O’Hara sings with bell-like accuracy and sizzles with sensual complications. Kennedy, who can alter the meaning of a song during one held note, fairly bubbles with repressed carnality.

It’s still hard to believe, even after more than one head count, that there are just 10 people in this cast. Some of them may match Jefferson May in total roles played, if not lines delivered, and there are moments when all hands are on deck, regardless of billing.

Their success in weaving this pageant is but one of the achievements of director Darko Tresnjak, who keeps the momentum going even during the moments of calm and seems to scorn the notion of dead spots. This is first-class stage illusion but there’s more afoot that mere trickery. This show is rich and wise with the very essence of the stage.

Alexander Dodge’s set is a useful toy proscenium with an inner below which makes the magic possible. The colors are fun but I might have wished that the ornamentation had equal wit, just as I would like to see some actual employment, in Philip W. Rosenberg’s lighting plan, of those footlights. (A special salute to Aaron Rhyne’s so-useful projections, not flashy, just indispensable.)  [php snippet=1]

Congratulations to Linda Cho for getting so many of the costumes so right, though inevitably, in such as massive and demanding visual extravaganza, there are moments when what’s being worn just isn’t quite right. (There’s a bit of wedding scene with the bridesmaids stuck in shop girl outfits.) But the only thing that really bothered me was the sore lack of hats, an outdoor fixture on heads of the era.

The Jonathan Tunick orchestrations make predictably suave use of natural strings and winds in the pit, presided over by the able Mike Ruckles. The necessary bits of hearty choreography are the work of Peggy Hickey.

I admire the crisp energy and bold self-assurance of this piece and I congratulate the management for such skillful casting. In sorting out the final odds and ends before declaring the work finished, though, I hope every caution is used to avoid smugness, always a danger in tales of loveable rogues getting away with something.