Is there a more instantly identifiable concerto opening than Edvard Grieg’s dramatic, descending A-minor arpeggio piano flourish? San Diego Symphony guest conductor Edo de Waart chose Grieg’s evergreen Piano Concerto in A Minor with Joyce Yang as soloist for the first program of the 2018-2019 season’s Jacobs Masterworks Series. And I am delighted to report that Saturday’s (October 6) performance by Yang, de Waart, and the orchestra breathed fresh life and inspiration into a work that is arguably too well-known for its own good. 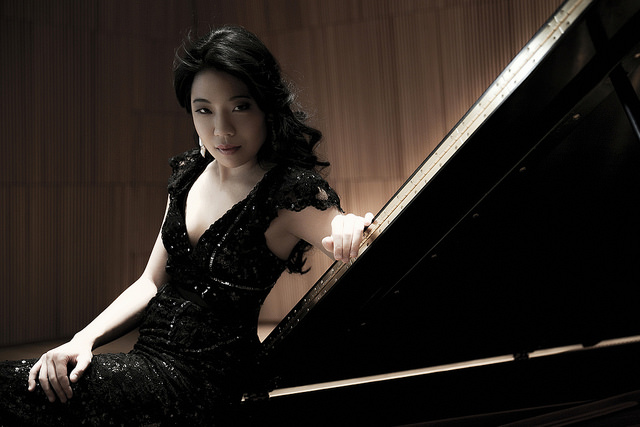 From Yang’s bold but subtly measured playing of that iconic opening, it was clear that she was inviting her listeners to join her on a complete and detailed journey through Grieg-land, rather than a once-over-lightly bargain tour that sped by everything but the flashy highlights. Complementing her formidable technical prowess with her unfailingly lustrous touch, Yang sumptuously illuminated Grieg’s dreamy melodies and gracefully animated his elfin dance forays. Even her boldest rushing octaves maintained an enviable sonic allure.

De Waart drew from the orchestra a majestic, colorful sonority that merged elegantly with Yang’s approach, bending the pulse with her always tasteful rubato—knowing precisely where to linger and where to move on. For this Piano Concerto he displayed an ideal balance of courtly, Old World refinement and unalloyed Romantic emotional intensity. Among the winning solo contributions from the orchestra, Principal Flute Rose Lombardo provided alluring solos in the outer movements, and Principal Horn Benjamin Jaber played nobly in the Adagio, as did Principal Cello Yao Zhao.

Yang’s encore, the charming Grieg “Nocturne” from his Lyric Pieces, not only contrasted with the excitement of the Concerto’s finale, but also connected with Michael Ippolito’s “Nocturne” that de Waart chose to open the concert. The young American composer explained in his program note that a 1940 Joan Miró painting titled “Nocturne” inspired his 12-minute orchestral essay. Ippolito’s style struck me as quite tonal with a slight modernist edge, and when I read his bio after the concert, I was not at all surprised to learn he studied composition with John Corligiano. Although Ippolito’s “Nocturne” flows without interruption, it is organized in three distinct moods: a bright, bristling scherzo at its center with calmer, even reflective moods on either side of the scherzo. In the final section, Concertmaster Jeff Thayer played a delicate, moody cantilena that was extended by the flutes to bring “Nocturne” to a serene conclusion. This work, premiered in 2012 by the Juilliard Orchestra in New York City, is one that I would eagerly hear again.

Under de Waart’s astute but never overbearing direction, the orchestra gave a breathtaking account of Beethoven’s majestic Seventh Symphony. Each movement unfolded with quiet nobility, at times even a resplendent grandeur that is too rarely encountered in Copley Symphony Hall. The mesmerizing second movement that begins like a solemn processional suggested an air of mystery or transcendence that adroitly set up the uninhibited ebullience of the scherzo. Throughout the Seventh Symphony, the orchestra’s tight ensemble and immaculate focus suggested that the San Diego Symphony is indeed ready to write a new chapter. I pray the players will maintain this momentum until their new maestro Rafael Payare takes charge next season.

This concert by the San Diego Symphony was presented October 6 & 7, 2018, in the Jacobs Music Center’s Copley Symphony Hall in downtown San Diego. For this review, the performance of October 6 was heard. The orchestra under Edo de Waart returns in the same venue on October 12 & 14 for a program featuring Mozart’s Symphony No. 40 and Joyce Yang as soloist in Rachmaninoff’s “Rhapsody on a Theme of Paganini.”