For as long as I can remember, the San Diego Symphony has topped off its summer pops season with an all-Tchaikovsky concert. Friday’s 1812 Tchaikovsky Spectacular concert at the Rady Shell was a reminder of those former programs, but proved different in several ways. 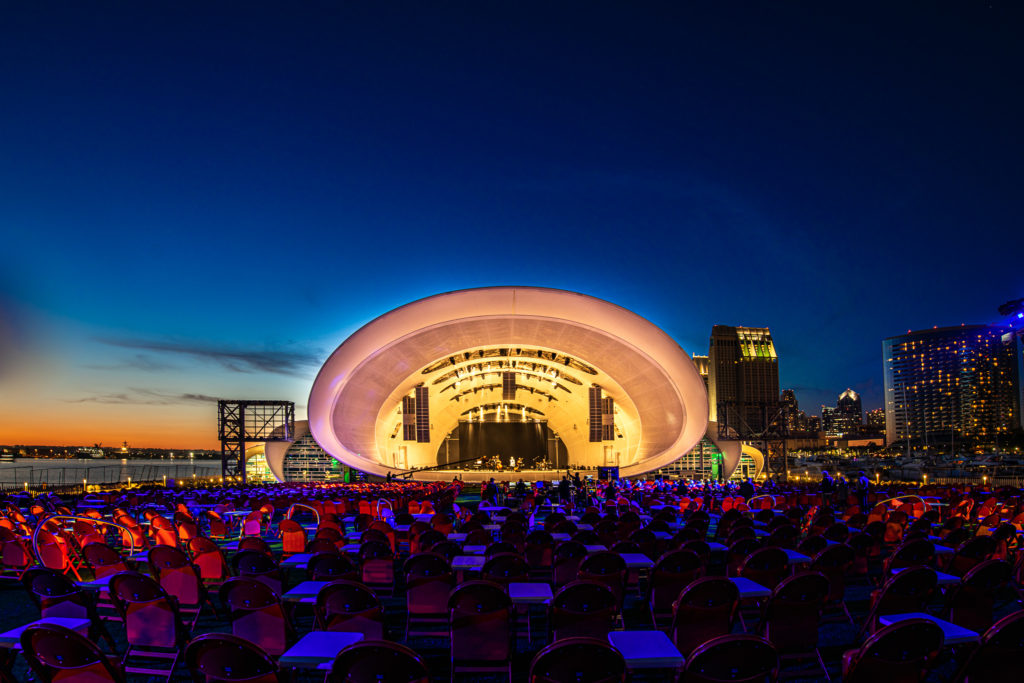 First off, the season at the new Rady Shell at Jacobs Park has just finished its first month and is now roaring ahead at full speed through mid-November, so there was nothing valedictory about this vibrant program under the able baton of guest conductor Yaniv Dinur. Only two Tchaikovsky works graced Dinur’s program, his “Romeo and Juliet” Overture-Fantasy and the ubiquitous, fireworks inspiring “Overture 1812.” The rest of the program offered equally festive pieces by Dvořák, Rimsky-Korsakov, and Khachaturian.

Dinur’s brisk romp through Antonin Dvořák’s program opening “Carnival” Overture and the orchestra’s unflinching, commanding response set the standard for the entire rewarding evening. Dinur, the Israeli-American who serves as Resident Conductor with the Milwaukee Symphony, took to directing the San Diego Symphony with the unbridled enthusiasm of a teenager at the wheel of a souped-up muscle car. And it proved a breath-taking ride!

Dinur opened “Romeo and Juliet” with appropriate mysterious anticipation and drew brilliant, taut ensemble work from the orchestra throughout the most turbulent sections of the always popular Overture-Fantasy. The oft-quoted love theme—a subject the composer expressed with incomparable finesse musically, but failed to effect in his personal life—was delivered with fleet ardor by Andrea Overturf on English Horn, Principal Harp Julie Smith Phillips, and Principal Flute Rose Lombardo. Given the work’s lavish array of fanfares from the orchestra’s brass choirs, the Rady Shell’s sophisticated sound system continued to prove its ability to deliver such complex sounds with amazing fidelity and depth.

Although the fourth movement of Nikolai Rimsky-Korsakov’s colorful tone poem “Scheherazade” is also replete with brass exultations, vividly executed by Dinur and the orchestra, nothing proved more winning than Concertmaster Jeff Thayer’s dulcet, sensuous performance of Schherazade’s solo theme that opens and closes the movement.

Before the demise of the Soviet Union, the Armenian composer Aram Khachaturian was frequently linked with Prokofiev and Shostakovich as a vaunted trio of leading Soviet composers. However, his political success pleasing the Soviet watchdogs of Socialist realism has reduced him to a capable second tier composer, today acknowledged mainly for his athletic ballet scores. Whenever filmmakers need lively, slightly exotic dance music, the “Saber Dance” from his ballet Gayane has proven irresistible.

In 1941, just before Hitler invaded the Soviet Union, Khachaturian completed a score to accompany the Mikhail Lermontov stage play Masquerade, which he later turned into a five-movement orchestral suite. Dinur and the orchestra gave a persuasive account of this ingratiating, boldly orchestrated suite, which opens with a muscular “Waltz” filled with grotesqueries that clearly set it apart from, say, Tchaikovsky’s elegant waltzes in his opera Eugene Onegin. Saucy counterpoint gives his “Mazurka” a bit of welcome edge, and his tongue-in-cheek concluding “Galop” takes its cues from Offenbach rather than the dance traditions of polite 19th-century society.

The “Overture 1812” fulfilled its function as prelude and accompaniment to the expected dazzling fireworks display, but I give Dinur and the orchestra credit for taking the score more seriously than has sometimes been the case in the past. But it must be frustrating attempting to carefully shape a thoughtful crescendo when canons and fireworks are exploding above the shell!

This concert by the San Diego Symphony was presented at the Rady Shell at Jacob’s Park on San Diego Bay on Friday, September 10, 2021.