Friends who know me well will quickly attest that they have never heard me exclaim, “I am dying to hear another performance of Tchaikovsky’s First Piano Concerto!” However, after hearing Conrad Tao’s spectacular performance of this popular work with the San Diego Symphony Friday (Nov. 2), I have been converted and am ready to swear—with my right hand on the Harvard Dictionary of Music—that I will eagerly attend any Conrad Tao performance of the Tchaikovsky First if I can possibly get to the concert hall in which he’s playing. 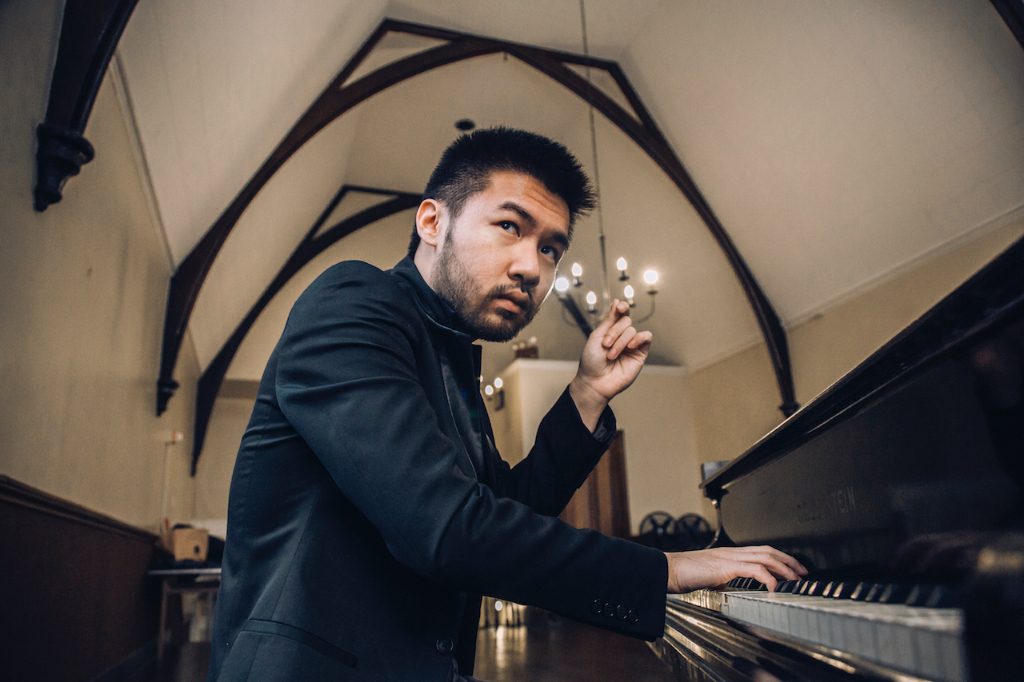 I have heard Tao play several times: he first blew me away by his amazing performance of the Dmitri Shostakovich First Piano Concerto with this orchestra under Ken-David Masur in May, 2015. So I expected to be enthralled by Tao’s performance of Tchaikovsky’s Concerto No. 1, but I never thought he would make me love that tired chestnut. He did. And then some.

To say that his account of the concerto was electrifying borders on understatement. He unleashed the concerto’s bravura opening majestically without any sense of bombast, an approach he pursued through the final cadence; his cadenzas exuded a sparkling but stylish improvisatory zeal, and he could dispatch a tornado of parallel octaves in both hands that still maintained the same buoyant touch he employed in Tchaikovsky’s many quiet asides. With the unswerving support of guest conductor David Danzmayr’s expansive yet magnificently detailed direction of the orchestra, Tao made every new idea sound remarkable and fresh, even though we recognized every one.

I could list many more virtues, but the most important observation is that in spite of the immense technical prowess required to make this warhorse splendid again, Tao never called attention to his playing. (Yes, I am contrasting him to a very popular young international pianist who is most familiar to San Diego Symphony audiences.) He completely merged into the piece—including the orchestral portions where he bobbed with the mighty cadences coming from his colleagues on stage—and only emerged from that state when the music stopped and he stood up from the bench.

For once, the Copley Symphony Hall gave the soloist a real standing ovation, one where the whole audience stood up immediately when the music stopped—not that usual lazy San Diego “standing ovation,” where a few people slowly stand and then others sporadically follow in various sections of the hall. For his sole encore, Tao played a dreamy transcription of the Largo from J. S. Bach’s Third Sonata for Unaccompanied Violin.

Danzmayr opened his program with the premiere of Mexican composer Javier Álvarez’s “Brazos de niebla” (“Arms of Mist”), a substantial 23-minute work commissioned by the San Diego Symphony that includes poetry by the California writer Juan Felipe Herrera. The central section of this robust tone poem is built around six of Herrera’s stanzas, alternating in Spanish and English, that recount the conflicting dreams, fears, and aspirations of a boy making the risky journey from Central America to a new life in the United States.

Like the middle movement of Leonard Bernstein’s “Chichester Psalms,” this section of “Brazos de niebla” contains an extensive solo for boy soprano, a demanding role carried out Friday with laudable skill and ardor by Gonzalo Ochoa Camarena from Tijuana. For Herrera’s incisive poetry. Álvarez devised angular themes, at times atonal, that often fought the orchestral accompaniment, but the young soloist delivered them confidently.

For the two extended sections that surround the poetry, Álvarez spun a pulsing texture of dense, mildly dissonant lines for full orchestra that included harp and four traditional Mexican vihuelas. His idiom struck me as similar to the complex but tonal harmonic palette of John Adams’ later orchestral works, although Álvarez injects generous amounts of traditional Latin American rhythmic patterns throughout, and his finale could easily be considered a wild dance movement. At the conclusion of “Brazos de niebla,” my guest remarked that he heard a lot of Leonard Bernstein in Alvarez’s style, but I reminded him that both Bernstein and his mentor Aaron Copland liberally borrowed from the musical traditions from south of our border in works such as West Side Story and “El Salón México.”

On a program that opened with a substantial premiere, former San Diego Symphony Music Director Jahja Ling would have made certain the rest of the program contained only familiar repertory, but Danzmayr boldly ended his concert with Serge Prokofiev’s Symphony No. 7 in C-sharp Minor, the composer’s rarely heard valedictory symphony. Outside of Russia, this symphony has been long dismissed as the composer’s final capitulation to Joseph Stalin’s dictates that Soviet music be instantly accessible to the masses, unlike the complex, daunting styles of contemporary Western composers such as Schoenberg and Bartók. Although the Soviet government supported music and musicians generously, they were expected to toe the party line or be sent to Siberia to join the rest of Russia’s dissident population.

Prokofiev was well aware that his colleague Dmitri Shostakovich had withheld his complex, masterful Fourth Symphony from performance, fearing the Stalin’s wrath—it was eventually premiered some eight years after Stalin’s death—and Stalin had already forbade further performances of Shostakovich’s dark Eighth Symphony because it failed to pompously celebrate his nation’s defeat of Hitler in World War II.

So in 1952 Prokofiev cautiously offered this Seventh Symphony—in that dark c-sharp minor key everyone associates with Rachmaninoff’s famous piano prelude—that carefully eschewed the complex contrapuntal textures and involved thematic development that made his Fifth and Sixth Symphonies so brilliant. In the Seventh Symphony, Prokofiev’s trademark themes unfold with their classic enigmatic turns, but they appear one at a time, like small school children neatly lined up by a stern teacher, never interacting or building to something greater.

Danzmayr and the orchestra gave a sympathetic, beautifully shaped and thoughtfully finished account of this four-movement symphony. I particularly admired the soaring cello theme in the third movement, the Andante espressivo, that gracefully migrated to the principal oboe and English Horn. If the final Vivace proved a bit too cheerful in its exuberant turn to the major mode—no doubt Prokofiev wanted Stalin’s censors to leave smiling—I think he can be forgiven. In ill health, Prokofiev made his last public appearance attending the opening of his Seventh Symphony in Moscow and died a few months later. At first no one in the Soviet Union was aware that their great composer had passed from them—because he died on the same day that Joseph Stalin died!

This concert was presented by the San Diego Symphony on Friday, November 2, 2018, at the Jacobs Music Center’s Copley Symphony Hall, and will be repeated Sunday, November 4, 2018, in the same venue.