Playwright Bryna Turner no doubt knew she was giving away much of the gist of her play by titling it Bull in a China Shop. Too easily described as a brisk biography of revolutionary feminist Mary Woolley, president of Mount Holyoke College in the early decades of the last century, her smart, 90-minute play from 2017 deftly splices Woolley’s radical crusades with her passionate, tumultuous relationship with Jeanette Marks, her life partner and former student. 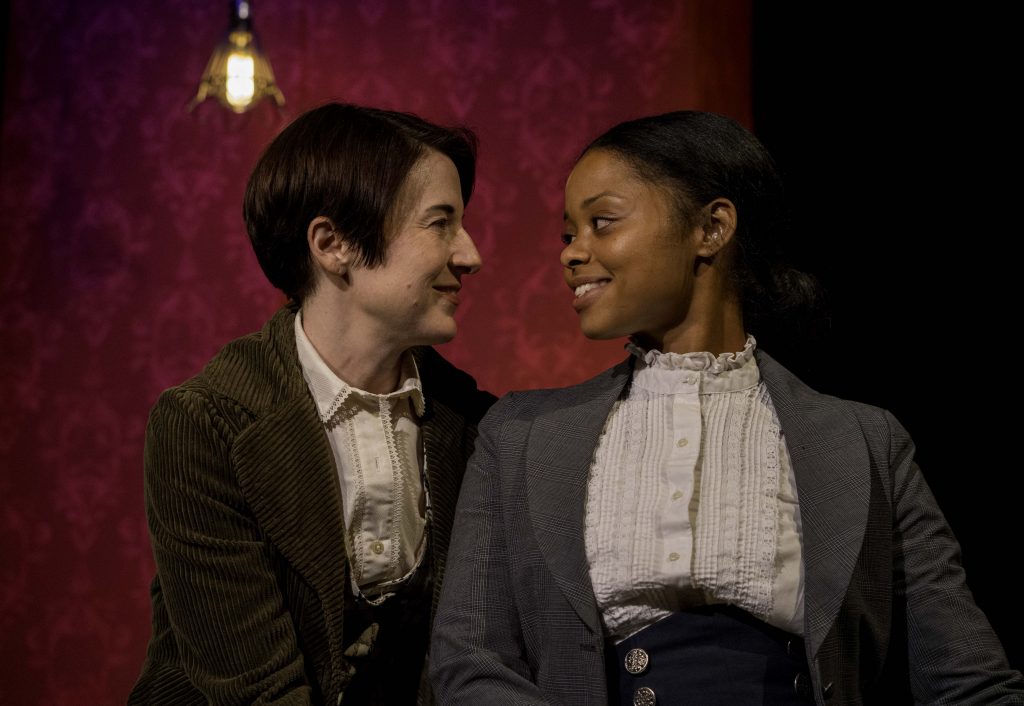 But as Bull in a China Shop unfolds, we realize that viewing Woolley merely as some laudable historical iconoclast misses her complexity, her humanity, and a great deal of irony. Indeed, Turner’s economically crafted fusillade of short, sharp encounters between lively characters is a paradise for lovers of irony.

Marks quickly surpasses her teacher’s revolutionary feminist idealism and has to drag Woolley kicking and screaming into the forefront of the Women’s Suffrage Movement. Early in their relationship, Woolley lures Marks from Boston to rural Mount Holyoke with the promise that they will live blissfully together once the school’s new President’s mansion is built, but then takes 20 years to complete it. After blithely doubling the length of her three-month China visit to participate in a global women’s conference, Woolley then waxes poetic about the pain of her separation from Marks after sighting a pair of swans from her excursion boat.

Woolley turned Mount Holyoke College from a respectable finishing school that aimed to produce docile wives for ambitious men to a university that aimed to provide women with as complete and broad an education as men received at the prestigious Ivy League universities. Although this may not appear to be a radical proposition today, in her day Woolley had to battle her era’s particular misogyny that claimed that rigorous intellectual activity was actually injurious to women’s health.

Turner, however, has not simply recreated a charming diorama of an untold tale from queer history. “It is also a queering of history, a look at the past events through a contemporary gaze,” she writes in her program notes about the play. This is most evident in her blunt dialogue, a crackling contemporary vernacular in which f**cking is always the adjective of choice, for example, and her characters easily punctuate angry assertions with an upward thrust of the middle finger. And in Diversionary’s production, following the playwright’s intent to queer history, only two of the five actors are white in this portrayal of the historical social context that was exclusively white.

Director Kim Strassburger has given Diversionary audiences as vibrant and compelling a production as anyone could imagine, and her urgent, spot-on pacing dares the audience to lose its focus for so much as a nanosecond. Turner’s rush of short, dangerously revealing scenes pop onstage brimming with immediate, persuasive emotional clarity and disappear the moment the knockout punch is thrown.

From the outset, Jo Anne Glover’s swagger and intellectual bravado astutely defined Mary Woolley as she refashioned Mount Holyoke to her vision, and no amount of protestation from Milena (Sellers) Phillips as Dean Welsh—who sometimes was reduced to mouthing the whiny complaints of the male college trustees—could sway her. Phillips’ patient gravitas as this senior faculty member proved just the right balance for the impetuous Glover, and casting the African-American Phillips in this role added another layer or irony to Turner’s play.

On several occasions in the play Dean Welsh agrees with Woolley’s positions, but argues that “this is just not the right time” to implement them. Students of the American Civil Rights battles of the 1950s recall how many of the Rev. Martin Luther King’s white “allies” urged him to modify his demands for equal rights with the same argument. To hear Phillips mouth this withering argument could not have heaped more ironic judgement upon it.

If Glover had Woolley’s petulant confidence down pat, she proved less persuasive when Woolley overplayed her hand and Glover had to plead forgiveness from her wounded partner. Tamara McMillan’s Jeanette Marks, however, started off with a prodigy’s self-assurance that quickly soared into a stunning combination of astute judgement and impenetrable aplomb. Of course, this is how Turner wrote the character, but McMillan brought her incandescent exuberance to Marks, which made her the emotional center whenever she was on stage.

In her day, Marks was a charismatic teacher, and when McMillan began to give a couple of her lectures to an audience of imaginary students, her delivery was nothing less than mesmerizing. In her portrayal of Marks, McMillan displayed a wide array of emotional moods and expressions with such impeccable timing that she clearly established her character’s stance even before the script explained it. In a scene late in the play when Woolley is off on her China excursion, Marks succumbs to the amorous advances of Pearl, a needy but relentless student. Even when McMillan is perched in bed with the ecstatic Pearl, the look of disdain on her face revealed that she knew her reasons for this tryst were beneath her, and her visual communication of her regret far exceeded her verbal explanations.

Andréa Agosto’s Pearl offered a master class in irritation, but then—no oyster produces a pearl without sufficient irritation, right? Her impressive solo aria of violent threats alternating with suffocating amorous shouts bellowed below Marks’ bedroom window earlier in the play brought cheers from the audience that any opera diva would relish. As Felicity, a faculty member and Marks’ roommate (remember, Woolley’s promised Presidential abode was 20 years under construction) who frequently acted as referee between Woolley and Marks, Maybelle Covington provided the requisite social lubrication between the feuding parties.

A simple stage design by Ron Logan of a door and three windows placed geometrically at the back of the stage to suggest traditional, sober college architecture worked perfectly. On Diversionary’s small stage, nothing more was necessary, save the massive executive desk that so happily converted to a wide bed when needed. Beth Connelly’s amply proper, flowing Victorian dresses set the period perfectly, as did the aptly mannish suits and ties for Woolley. Curtis Mueller’s bright lighting did the trick—nothing was hidden on this stage or in the pages of Turner’s bold script. TJ Fucella’s excellent sound design set the play’s parameters from the beginning: a stately Victorian choral processional with organ accompaniment gives way to a raucous explosion of heavy metal dance music. Turner’s topic was vital then—and now—and perhaps always. But you better give her your complete attention as she makes her case!

Bull in a China Shop program