With its campy overtones, the term “diva” peppers our vernacular in so many contexts that make it all too easy to forget the operatic roots of this simple noun. Terrence McNally’s play Master Class focuses on one of the great authentic divas of the last century, the legendary soprano Maria Callas. 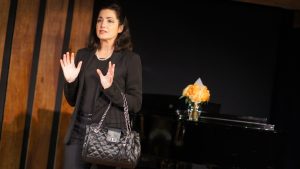 Based on a series of actual master classes that Callas conducted late in her career at New York City’s Juilliard School of Music (1971-72), McNally employs the structure of a master class to celebrate and perhaps wallow a bit in Callas’ larger-than-life persona.

Ion theatre’s riveting production of this 1995 play brilliantly captures McNally’s sharp wit and keen emotional edge, and Sandy Campbell’s Callas commands the stage every moment of its two-hour span. With Callas’ hauteur, brittle anger, and condescension, it would be easy to reduce her to an unpleasant caricature, but Campbell assiduously worked to win over her audience at every turn by demonstrating both the diva’s humanity and her intense need for audience approval.

McNally gives us a Callas rife with contradictions, which her many biographies confirm. From the stage, Callas lectures both the audience—yes, people bought tickets to see the celebrity diva coach young singers—and her students on the need for hard work and discipline, yet she runs her class without a shred of self-discipline. In spite of the fact that Callas admonishes the audience that a master class is about making music and not about her, she turns every topic and every piece of music that a student brings for her critique as a trigger for an extended personal reminiscence.

Instead of listening to the aspiring singers perform in order to give them her seasoned advice, the unambiguous purpose of any master class, each aria sends Callas into a memory of one of her own performances of the same opera, and McNally has the student singer and accompanist leave the stage while a Callas recording over the sound system floods the darkened room. 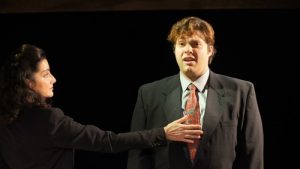 Campbell is joined by a strong supporting cast: three singers, a pianist, and a stagehand. Soprano Laura Bueno convincingly incarnated the timid and awkward Sophie, whose prissy schoolgirl attire and admiration for another coloratura soprano—Joan Sutherland—draws Callas’ immediate scorn. Callas dismisses Sutherland’s vocal ability with the sneer, “Well, she did her best.” Tenor Alex Cammarata jauntily portrayed the cocky young tenor Tony, whose callow self-confidence the diva dents only slightly. Although he badgers her for constructive criticism, Campbell shrewdly covered Callas’ observations—nothing but banal generalities—in a haze of studied indifference.

After Cammarata’s passable account of one of the tenor arias from Puccini’s Tosca, Campbell tossed off shallow compliments with the blithe air of a doting aunt. She had already disclosed to her audience that in her Tosca performances, she never bothered to listen to this tenor aria because she was always in her dressing room preparing for her own entrance immediately after the aria. 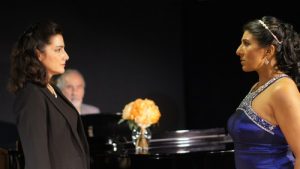 Priti Gandhi brought her ample vocal technique and operatic experience to Sharon, the third aspiring singer. Although Sharon is at first frightened by Callas and runs out of the room, she returns after Tony’s aria and sings for her Lady Macbeth’s aria and cavatina from Verdi’s Macbeth. Gandhi’s vocally powerful, impassioned account of of this pair of solos was probably too sophisticated for a conservatory student to give, but it was a treat to the opera lovers in the audience (and I recognized more than a few). While Gandhi sang the aria, Campbell kept circling her, spouting interpretive suggestions, and it was particularly amusing to note how Gandhi reacted with sarcastic exaggeration to most of them.

An accomplished pianist and accompanist, Daniel James Greenbush generously fulfilled the significant musical responsibilities of Manny, the master class accompanist, and handled discreetly his modest role in the dramatic action. Colleen E. Keith’s bored Stagehand insisted that she would never give in to the diva adulation suffusing this event.

Kim Strassburger’s tightly paced and seamless direction kept the energy of this play at a high level, and her movement of the actors on Claudio Raygoza’s appropriately simple and uncluttered stage kept a potentially static situation lively. The favorable influence of dramaturge Dianna Ruggiero clearly focused every musical detail of the production: every aria title, composer, musical term, not to mention Campbell’s pristine, artificial diction, sounded true and authentic.

With the exception of Campbell’s elegantly tailored black sweater and slacks accented by a tasteful gold print scarf, Mary Summerday’s costumes were deliciously outlandish. Remember, dressing up in the early 1970s was—at least in hindsight—ludicrous.

Some critics find Master Class to be one of the less glorious plays in the significant canon of Terrence McNally’s works, and from a purely dramatic point of view, it is not that compelling. The first act does not set up anything significant that needs to resolved in the second act, so the latter is just a variation on the first act. But McNally’s literate, dazzling dialogue carries the play, and for music-lovers, the subject provides a sustained high that transgresses not a single law or statute.

I doubt that San Diegans will encounter a more sophisticated production of Master Class in the foreseeable future.