To the delight of the crowd at the Spreckels Organ Pavilion Monday evening (July 11), organ virtuoso Christoph Bull brought a meaty, eclectic program to the third week of San Diego’s annual International Summer Organ Festival. Bull is no stranger to audiences at the Balboa Park instrument, and the accomplished U.C.L.A. University Organist is regularly invited to perform for organists’ conventions here and abroad. 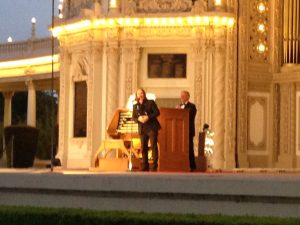 By chance, I happened to hear him perform a slimmed down version of his Spreckels recital at a historic Episcopal Church in downtown Philadelphia just 10 days ago—the closing program of the Organ Historical Society’s annual conclave, held this year in the City of Brotherly Love. I think it is safe to say that Bull had more fun with the myriad possibilities of the mighty Spreckels instrument.

Bull’s unique musical journey—trained in the organ-rich musical traditions of his native Germany but completing his organ studies in American universities and conservatories—gives him an approach to the organ that balances Teutonic scholarship with American showmanship. In his performance of toccatas and fugues by J.S. Bach and Max Reger, for example, clarity of line, well-defined motivic development, and a keen sense of the music’s structural architecture prevailed. I heard a direct line of development from those influential, meticulous post-war Bach recordings by Helmut Walcha to Bull’s majestic but still tastefully understated Fugue to Bach’s “Dorian” Toccata.

Like the flamboyant American organist Virgil Fox, who took great delight serving up his Bach arrangements in a plush Romantic style, Bull freely takes a Bach fugue and reconstructs it with syncopated jazz rhythms, as he did so cleverly in his “Well-Tempered Variations on a Bach Prelude in D Minor.”

And like the contemporary organ superstar Cameron Carpenter, popular music culture is on Bull’s radar. Monday he played musical tributes to both David Bowie and Prince. He turned Bowie’s 1971 “Life on Mars” into a gently pulsing ballad accompanied by the Spreckels Organ’s rich string sections, and to bring out the swagger in Prince’s iconic “Purple Rain,” he turned up the tremolos on the theater organ sounds buried in the instrument.

Bull’s sense of drama propelled his thrilling account of Reger’s D Minor Toccata, Op. 56, No. 1, using the organ’s recently augmented reed sections to ignite the composer’s snarling, dense chromatic progressions, but his program-opening account of Louis Vierne’s “Carillion de Westminster,” a popular French toccata, could have used a touch of the drama he lavished on the Reger.

Of Bull’s own compositions, I was taken with his “German Folk Song Arrangement,” a winning medley of traditional tunes bookended by the lovely “Innsbruck, ich muss dich lassen,” a tune that has found its way into many American Protestant hymnbooks. If Bull’s idiom sounds conventionally tonal, his settings of the tunes proved consistently inventive and provided amusing surprises along the way. However, even a second hearing of his minimalist “A Minor Trance” did not persuade me of its merit as a repertory piece. Not every improvisation—at which Bull is indeed skilled—is worthy of preserving.

In 1914, when the Spreckels Organ was built, these grand instruments were expected to play transcriptions of well-known orchestral works, so it was no surprise that Bull gave us transcriptions of Maurice Ravel’s “Bolero” on the program and Manuel de Falla’s “Ritual Fire Dance” as an encore. Of the two transcriptions, the organ and Bull did greater justice to de Falla’s more inherently dramatic piece.

Bull climaxed his recital with a brightly-paced, crisply ceremonial interpretation of William Walton’s “Crown Imperial,” one of those quintessentially British royal processional marches that is able to get amazing mileage out of a single fanfare.

[themify_box style=”shadow” ]This recital at the Spreckels Organ Pavilion in Balboa Park was given on July 11, 2016. The Spreckels Organ Society’s 2016 International Summer Organ Festival continues with free Monday evening concerts at 7:30 p.m. through August 29, 2016.[/themify_box]