A love letter and condemnation of classical musicianship at the same time, returning production 2 Pianos 4 Hands has arrived (with standing ovation) to grace the North Coast Repertory Theatre stage through January 1.

Any professional musician knows that the craft is demanding, gut wrenching, passion-inspiring, and invigorating. There are tireless hours of rehearsal, repertoire building, performance analysis, and aural skill development. And, in a field where achievement is earned due not only to talent, but also discipline, those who succeed are those who begin early, practice often, and who have the necessary drive to make it their life’s work. And thus, the story of two hopeful classical pianists, named after playwrights Ted Dykstra and Richard Greenblatt (and roughly based on their own formative experiences), unfolds. 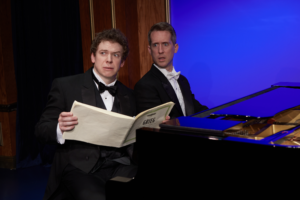 The plot of the production is more or less simple – the audience meets 10 year old Teddy and Richie as they muddle through fingering, tempos, and learning time signatures. As the boys grow increasingly more competent at the keys (and concurrently navigate their angsty tween years), the two musicians find themselves competing at piano competitions, auditioning for conservatory programs, and ultimately wading through the nebulous space of part-time quasi-success that their parents warned them about. And yet, despite the fact that the performers’ classical career plans are ultimately thwarted, this show, directed by Tom Frey, is a clever comedy that finds its laughs easily.

As a musician myself who at one point enrolled in a conservatory-style program, there is much in this show that resonates with me, as many scenes reflect my own experiences: the expectation to excel in the craft (by others and by oneself), the floundering in other areas due to blinders of the world outside of music, the encouragement of family and friends to have something to fall back on, the highest highs of brilliant performances, and the lowest lows of catastrophic auditions. And, despite the length of the production, clocking in at just under 2.5 hours with an intermission, this show is one that maintains focus throughout via quippy music humor, high-energy banter, and brilliantly performed piano numbers.

Stepping into their roles adroitly (again, as both have played these parts in three previous iterations under the same director) are actor/musicians Jefferson McDonald (Ted) and Matthew McGloin (Richard) who have flawless command of their numerous character roles as well as incredible chemistry with one another. Their hilarious duo scenes are interspersed with classical, jazz, and rock tunes performed live on the two onstage pianos, self deprecating commentary (“How are you supposed to make your fingers DO that?”), and parallel scene structure that earns laughs while also showing the competitive nature of the industry. Directorial choices are sound and blocking works well for the North Coast Repertory space and, beyond that, there is a comfortability here; it is evident that the creative team of director and actors are well matched. 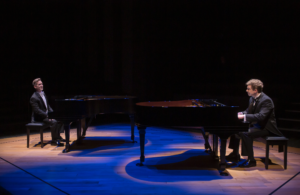 Behind the two pianos, framed and frosted light boxes generate an opportunity for shadow work and projections, whereas on-stage lights positioned above the keys and on the performers shift to mark key transitions between the Ted and Richard storylines. These choices, executed by resident designers Marty Burnett (set) and Matthew Notovny (lights) allow the audience to understand the context while adding artistry to the scenes and highlighting the well-executed performances of each composition; they are simple and effective in their simplicity.

Leaving the playhouse, I found myself smiling, laughing, reminiscing, and considering just how to put my surprising joy into words. Jazz connoisseurs, classical aficionados, former would-be musicians, and lovers of laughter, celebrate… North Coast Repertory Theatre’s 2 Pianos 4 Hands is here through the top of the year, hitting all of the right notes.