Tango Obsessed, the catchy title of Camarada’s Thursday chamber concert at The Conrad in La Jolla, might be Beth Ross Buckley’s personal confession. After all, as the ensemble’s Artistic Director, by my count this is her fourth Camarada tango extravaganza since 2018, and the third year in a row she has presented tango at The Conrad. But even if you are not as tango obsessed as Ms. Buckley, it would be difficult to complain about the ensemble’s sparkling musicianship, the dancers’ fleet, sexy moves, and the overall joie de vivre this spirited combination evokes.

Thursday’s all-tango program presented requisite servings of Astor Piazzolla, the popular originator of nuevo tango, as well as the premiere of a commission, Abrazar al Viento (Embracing the Wind) by Andrés Martin, the ensemble’s fleet bass player. When I think of Piazzolla’s tangos, his agitated rhythms and vibrant, complex textures immediately come to mind, and Camarada’s brisk accounts of his Escualo and Libertango filled that bill quite nicely. In Libertango, Dana Burnett confidently drove the pulsing piano track, gracing it with her crisp, seamless glissandos, while dancers Carolina Jaurena and Marcelo created a saucy, athletic tango to match its carefree mood. 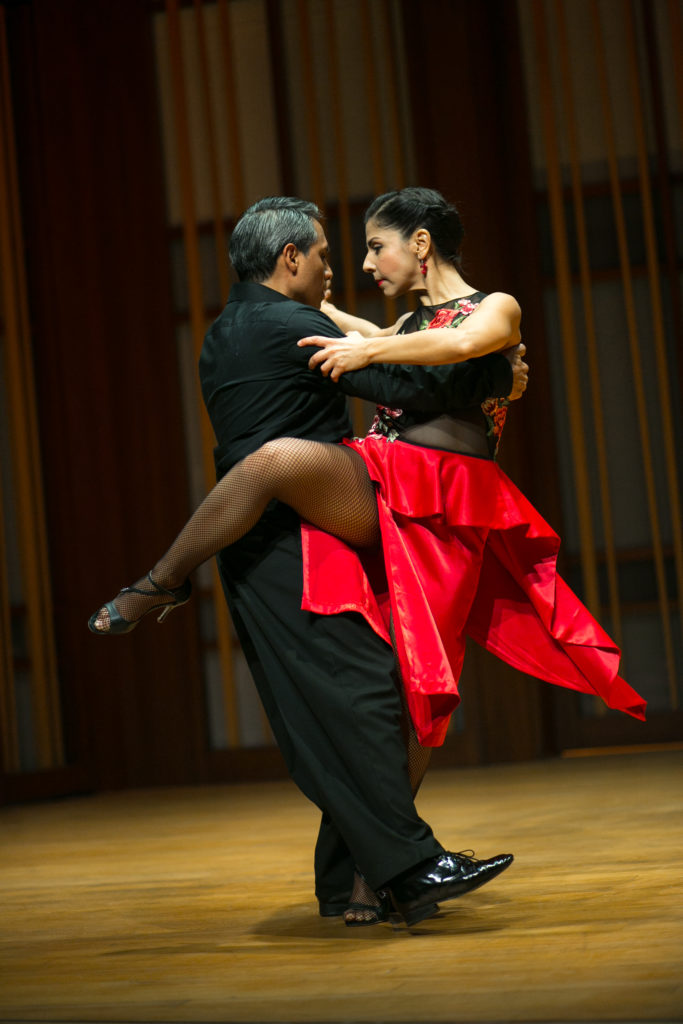 Piazzolla’s Soledad (Solitude) proved that the popular Argentine composer was more than a party animal. The dusky character of Beth Ross Buckley’s mesmerizing flute solos in Soledad floated with languorous ease over deft pizzicato support from Martin’s bass and Fred Benedetti’s guitar. In JC Cobain’s Nostalgias, violinist David Buckley took over the composer’s more rhapsodic themes with just the right amount of flourish, and Martin returned the favor when it was his turn.

Martin’s Abrazar al Viento proves this Buenos Aires native has made a worthy contribution to the city’s fabled tango tradition. If his harmonic palette is not particularly adventurous, his cornucopia of fresh, inventive melodies compensate nicely, and he has adroitly structured the pace of his five-movement work so the bold, animated finale leaves his listeners with the sense of having completed a rewarding journey.

Putting Kurt Weill’s 1934 Tango Habanera on the program reminds us how international the tango became in the last century. Weill managed to graft a touch of Berlin cabaret song into his tango, and it was popular enough in its day for Roger Fernay to compose a lyric for Tango Habanera, which became known as the song Youkali. Camarada’s polished account of Weill’s tango was matched by the dancers’ sophisticated, urbane choreography.

This concert was presented Camarada on Thursday, February 24, 2022, in the Baker-Baum Concert Hall of the Conrad Prebys Performing Arts Center in downtown La Jolla.