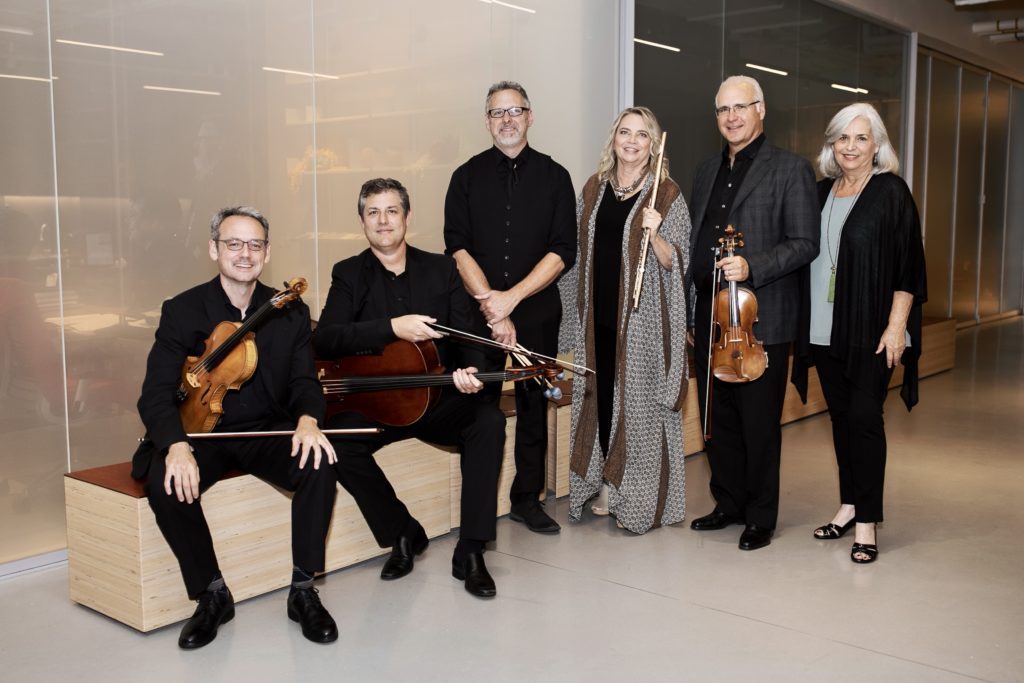 In stark contrast to Bridge’s dreamy style, Nathan Daughtrey’s splashy “Azul” capitalized on the brilliant sonic possibilities of the vibraphone and marimba to portray the opposite states of being that Robert Frost so sharply contrasts in his poem “Fire and Ice.” To suggest a world destroyed by ice, percussionist Matthew Armstrong reiterated loud, closely-voiced dissonant chords that projected the vibraphone’s bright, ringing sonority while flutist Beth Ross Buckley layered penetrating motifs that crowned Armstrong’s rapid traversal up and down his instrument’s compass. To conjure a fiery denouement, Armstrong moved to the marimba, whose darker sounds more directly conveyed the terror of an unpredictable firestorm, over which Beth Ross Buckley again added her dazzling forays. I would gladly hear this arresting piece a second and third time.

According to Travis Maril’s introduction to Michael Daughtrey’s “Diamond in the Rough,” the three movement work is built around several allusions to Mozart. But aside from violinist David Buckley’s quote of a familiar theme from his opera “The Magic Flute” squeezed out in high-pitched harmonics, the other Mozart allusions escaped me. High-pitched, bowed violin ostinatos and vibrant patterns sounded from Armstrong’s crotales gave an eerie, otherworldly character to this piece, although Daughtrey does manage to come back to earth at the finale with a kind of rowdy, modernist hoedown.

Camarada’s encore, the only offering that used all six of the concert’s performers, brought a delightful, rousing chamber arrangement of Maurice Ravel’s “Laidonerette, Empress of the Pagodas” from his piano four-hand Mother Goose Suite. A work that exudes a most playful mood, “Laidonerette” indulges in just the right amount of pentatonic chinoiserie.

This concert was presented by Camarada on Thursday, October 13, 2022, in the recital hall of the Mingei International Museum in San Diego’s Balboa Park.