To survive the brutal oversight of the Soviet Union’s arts censors, composer Dmitri Shostakovich said as little as possible about his music and kept his most controversial works locked in his desk drawer. Friday’s (August 21) all-Shostakovich program at La Jolla SummerFest confirmed that the composer’s enigmatic quality and quietly profound instincts have served him well in history’s larger time line.

This first of three consecutive festival programs devoted to Shostakovich offered two of his more demanding chamber works and a pair of shorter, entertaining scores. In the latter category we heard his Octet for strings, a polished, compact inspiration completed at age 18, and the Concertino, a saucy romp for two pianos he confected for his teen-age son Maxim, who later became a heralded conductor in the west. 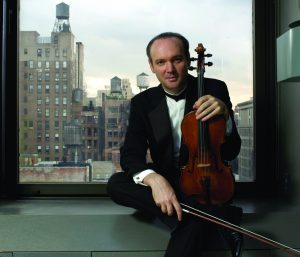 Violist Paul Neubauer and pianist Vladimir Feltsman brought the Sherwood Auditorium audience into the inner sanctum of Shostakovich’s soul in a riveting account of the Sonata for Viola and Piano, the composer’s valedictory work completed shortly before his death in 1975. Spare, haunting and eerily reflective, this three movement sonata brought to mind the canons and other slender chamber works of Anton Webern, the 12-tone disciple of Arnold Schoenberg.

Shostakovich never identified with this serialist school of composition, and, especially after Igor Stravinsky’s late-in-life capitulation to its rigid doctrines in the 1950s, North America’s musical avant garde dismissed everything Shostakovich wrote as either hopelessly retrograde or simply naïve. But in this Viola Sonata, he communicated with devastaing skill and emotional acuity the existentialist awe and terror that ravaged the last century both politically and philosophically, surpassing the serialists on their own aesthetic turf. The composer’s allusions to other composers in this sonata included riffs on the main theme and harmonic progressions of Beethoven’s “Moonlight” Sonata and the arpeggiated texture of J. S. Bach’s first Prelude in The Well-Tempered Clavier. Even as he prepared to depart this mortal coil, Shostakovich was still sending enigmatic messages while affirming his alignment with the great canon of western music.

From a set of programmatic descriptions Shostakovich originally placed (but later removed) before each movement of his String Quartet No. 3 in F Major, Op. 73, it is easy to hear this work as a musical documentary of World War II, progressing from the nervous lightheartedness of the opening movement—Europe before the war and the Soviet Union’s temporary treaty with Hitler at the war’s outset—to the wary anticipation of a Cold War that was unfolding in 1946, when the composer finished his quartet.

Or it is possible to hear the Third String Quartet in purely abstract terms, its five movements as logically and beautifully structured as the Béla Bartók quartets from the previous decade. Returning to the SummerFest stage, the Borromeo String Quartet brought its vigorous discipline and tight ensemble to the work, leading us through its exhilarating journey with complete authority. I suspect the key to their lively yet mellow sonority—which never tires the ear—is the brightness of first violinist Nicholas Kitchen’s upper range that plays so well against violist Mai Motobuchi’s dark, penetrating thrust. Perhaps that is why they play adjacent to each other—the more typical arrangement is to have the violist sit across from the first violinist.

Borromeo was joined by four other SummerFest strings for the Octet, Op. 11, with violinist David Chan a welcome addition in the first chair position. This high-powered ensemble electrified the Sherwood Auditorium stage with evident enthusiasm for the short, modestly scaled piece. Pianists John Novacek and Alan Woo treated the Concertino for Two Pianos, Op. 94, as a tongue-in-cheek competition as they traded themes and raced together. For once, four hands on two keyboards was as much fun for the audience as it was for the players!

[themify_box style=”shadow” ]This concert sponsored by the La Jolla Music Society was given on August 21, 2015, at the Museum of Contemporary Art San Diego’s Sherwood Auditorium in La Jolla. SummerFest 2015 continues in this same venue through August 28, 2015.[/themify_box]