The Russians are coming to San Diego, but not from the Bolshoi. Instead, dancers from the Dutch National Ballet and a handsome Cuban will guest star in California Ballet Company’s “Swan Lake” in May.

To cap off its 45th Anniversary season, CBC has been promoting black-tie dinners, galas, and Bolshoi guest artists Nina Kaptsova and Alexander Volchkov in a full-length “Swan Lake,” on May 18 and 19.

But “due to recent events at the Bolshoi Ballet, and with current tensions in the Bolshoi company, all international tours have been cancelled for the season, and their dancers are not to leave the country,” according to a CBC press release. 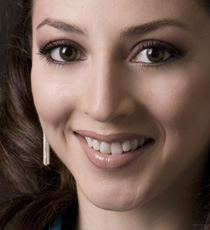 Maia Makhateli from the Dutch National Ballet will dance the role of Odette/Odile. Photo: CBC

As a result, CBC has hired dancers from the Dutch National Ballet. Principal dancers Maia Makhateli and Artur Shesterikov will join CBC dancers in the roles of Odette/Odile and her Prince Siegfried. Technically, Makhateli is from Tbilisi, capital of the sovereign state Georgia that was once part of the Soviet Union. Sheserikov is from Perm, Russia.

The Bolshoi Ballet has been under intense investigation since the acid attack on artistic director Sergei Filin.

Filin, 42, had sulphuric acid flung in his face outside his Moscow home in January.  He suffered serious burns to his face and eyes, but hopes to return to work later this year.

The legendary company will also be audited by the government, though Russia’s audit agency, according to the Associated Press, said the audit was planned before the acid attack.  And the audit agency said the audit is not linked to accusations of financial abuse by Bolshoi soloist Pavel Dmitrichenko, 29, who has been charged with masterminding the acid attack. The hired attacker and a driver have also been arrested. Dmitrichenko claims he never ordered the attack and asked the court to release him from detention pending trial.  His defense argues that he, as a professional dancer, needs regular exercise that he cannot get while locked up.

To make matters worse, a former dancer at the Bolshoi publicly accused company management of pimping out its female dancers to wealthy patrons. The claims come from Anastasia Volochkov, a dancer who left the company a decade ago.

And Bolshoi ballerina Svetlana Lunkina and her husband asked for refuge in Canada soon after the acid attack. She said her relationship with Filin had been “strained,” according to the AP. She said she feared returning to Russia and wanted to prolong her stay in Canada.

Meanwhile, back in San Diego, California Ballet will perform Thor Sutowski’s full-length “Swan Lake” only twice, May 18 at 7:30 pm, and May 19 at 2:30 pm, at the San Diego Civic Theatre. www.californiaballet.org.

Presented in four acts, the ballet is the ultimate struggle between good and evil.  In the tragic tale, Odette, the beautiful Swan Queen is imprisoned under the spell of evil sorcerer Von Rothbart.

Strangely, on the night that Filin was attacked with acid (Jan. 17), he was supposed to attend the Bolshoi’s performance of “Swan Lake.” Events of that night read like a scary screenplay. Sadly, his injuries are a dark reality, not theater, or ballet.

Instead of staying to share compliments or critical notes with the company, he went to another show at the Moscow Art Theatre.  He drove home, and while reaching for the security buzzer, Filin, a man known for his good looks, was confronted by an evil foe who doused him with acid. He fell into snow and rubbed it into his face and eyes.  It’s believed the snow may have helped slow the horrific burning of his skin, although he still suffers near blindness in both eyes.