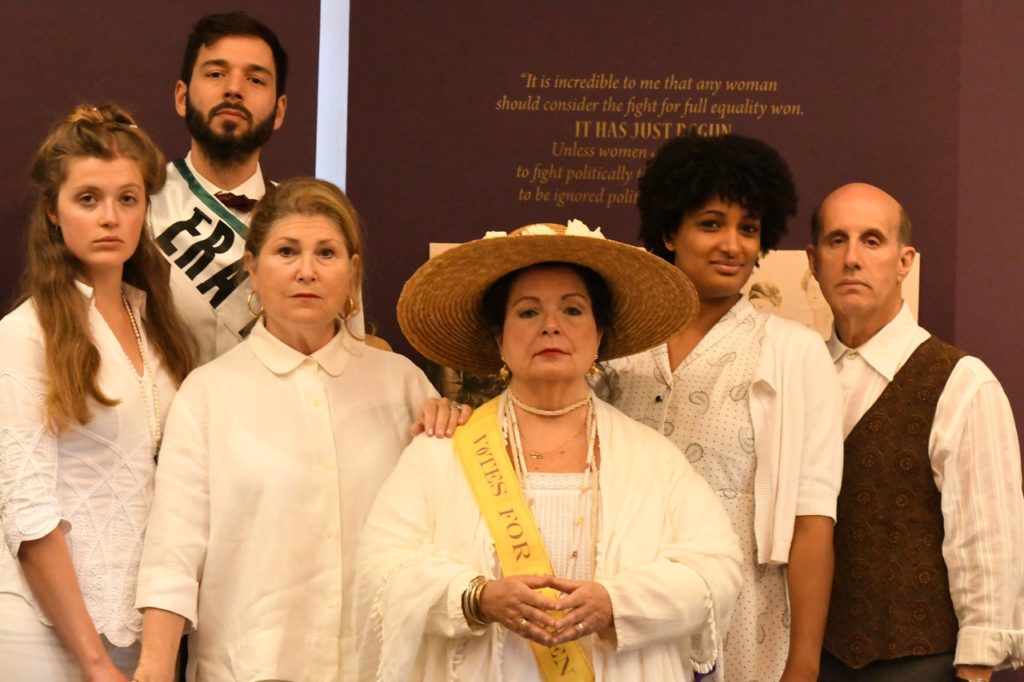 Since the air waves are clogged with the heated politics of our quadrennial nominating conventions, a concert of songs about the simple act of voting sounded both relevant and comforting. Bodhi Tree Concerts chose the final day of the National Democratic Convention, August 20, to offer a charming online potpourri of songs that celebrate this 100-year anniversary of the passage of the 19th Amendment.

Bodhi Tree’s magnificently researched “Songs of Suffrage” ran the gamut of populist ditties cranked out at the turn of the last century to probing arias from 20th-century opera and musical theater, all performed by a team of accomplished vocalists and accompanied by the astute pianist Ines Irwati. Of course it was amusing to hear Danielle Perrault sing the snappy but quite didactic text “Going to the Polls” set to the tune of the traditional folk song “Coming Through the Rye” or to hear Mary Munger Taylor sing a clever ode to “The Yellow Ribbon,” that identifying bit of costume worn as a sash on the suffragette’s customary all-white attire.

But such entertainments at the program’s beginning did not prepare the listener for the searing emotions evoked by Perrault’s reading of Sojourner Truth’s gripping poem “Ain’t I a Woman” followed by her striking interpretation of “The Eagle and Me,” a song of immense but unfulfilled aspiration from the 1944 musical by Harold Arlen and Yip Harburg, Bloomer Girl. Conflicted resignation lurked in Gertrude Stein’s puzzling poetry in “Where is Where” from her opera The Mother of Us All, written in 1947 with Virgil Thomson about the life of suffragette Susan B. Anthony. Angelina Réaux unleashed both the agony and the ecstasy of this compelling extended aria from an unjustly overlooked opera in the American opera canon.

Molly Smith gave a stirring, heartfelt account of contemporary composer Joyce Johnson Royce’s “Standing on the Shoulders,” a ballad of gratitude to generations of protesting women commissioned in 1995 for the 75th anniversary of the Nineteenth Amendment. As Smith and Irwati offered this ballad, behind them unfolded a montage of historical photos of these exemplars who championed the cause. Other gems on this comprehensive, wide-ranging program included Michael Sokol’s tongue-in-cheek account of a Yiddish song from the heyday of tin pan alley, “Khantshe” by Joseph Rumshinsky and Isadore Lillian; Taylor’s stylish rendition of “19th Amendment” by the queen of country music Dolly Parton, and Jonathan Nussman’s poignant but telling performance of “That Ragtime Suffragette” by Ayer and Williams that heralded the domestic role reversal of fathers tending their offspring at home while mothers marched in public protest with their suffragette sisters.

As Bodhi Tree completed its “Songs of Suffrage” concert, elsewhere online the Democratic Party in convention was celebrating a contemporary heroine of women’s suffrage: Kamala Harris, its nominee for Vice President in this year’s upcoming election. Should she be victorious, it will no doubt unleash another round of celebratory songs, and if that happens, you can be certain that Bodhi Tree will be offering them in concert.